More than 300 Yazidi captives killed by Islamic State in Iraq 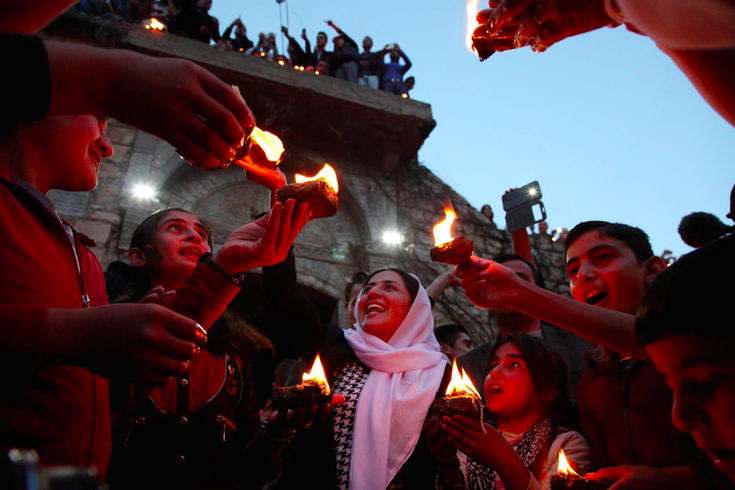 Yazidis gather at the holy shrine of Lalish, 57 kilometers (35 miles) north of militant-held Mosul, Iraq, as thousands celebrate the New Year, their first since Islamic State militants swept through the area last summer.

More than 300 Yazidi prisoners in northern Iraq were slaughtered by ISIS militants on Friday, according to a statement released by the Yazidi Progress Party.

The party statement, confirmed via Shafaq News, says the massacre occurred near Mosul in the Tal Afar district, though the manner of the deaths was not disclosed, the U.K. Daily Mail reports.
Last summer, as ISIS took Iraq by storm, more than 40,000 Yazidis were kidnapped at gunpoint in their villages, many of them forced into the mountains of northern Iraq. The ancient religion of the Yazidis, which combines elements of Zoroastrianism, Christianity, and Islam, is viewed by the extremist militants of Islamic State as minority devil worshipping.
Last month, more than 200 Yazidis were set free in northern Iraq after about a year in ISIS captivity. They were said to be in poor health after suffering neglect and abuse.
A report published last month by the UN Human Rights Office described killing, torture, rape, sexual slavery, and use of child soldiers by extremist militants against Yazidis in Iraq.
The Yazidi Progress Party has called on Iraq's government and international organizations to intervene and enable the release of remaining captives.