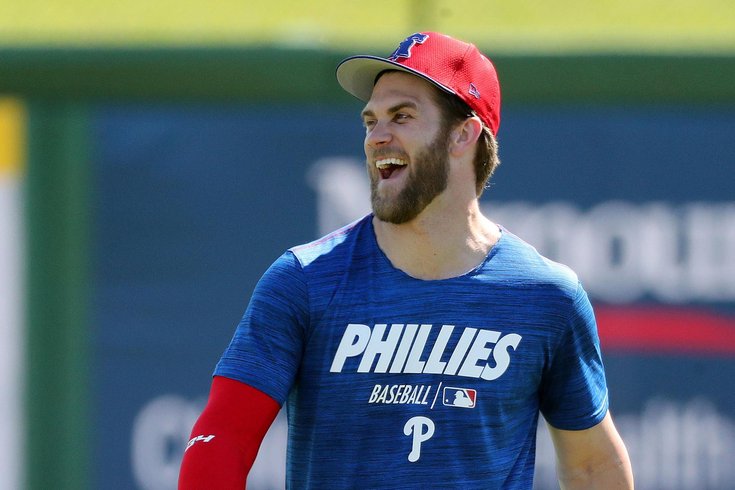 The "It's Always Sunny in Philadelphia" creator, spotting a Phillies photo that screamed for his commentary, reached out to Harper on Twitter on Monday afternoon.

Dayman
Fighter of the Nightman
Champion of the Sun pic.twitter.com/d1Ij6h1feW

Hey Bryce- i feel like i can call you Bryce because we are so much alike. Wanna have a catch? https://t.co/DzZQbzfk8r

Harper, who's still adjusting to the fanatical sports atmosphere in Philly, quickly accepted the invitation.

You sure can call me Bryce. I bet this will be a real ‘grand slam’ of a friendship. Let’s have a catch sometime this summer at the Bank! #PhillyLoaded https://t.co/QN9ZcBMhIZ

And then McElhenney upped the ante, putting Mike Trout's future on blast.

Deal. Hey @MikeTrout you want in on this? I know I can’t throw as fast as you but I think you would be impressed with my speed. I like your hair. These are all the things we can talk about and more. See you in 2020! https://t.co/oqJlmdS7BJ

McElhenney has a history of befriending Philadelphia athletes. He's been buddies with Chase Utley for years and even included Jason Kelce and Beau Allen in a Super Bowl episode last season.

RELATED: Glenn Howerton says to expect more Dennis in 'It's Always Sunny in Philadelphia' next season

This catch might work out better if Mac is pitching to Harper. Seventy beers deep, Charlie Kelly has a perfect batting average against Mac. It would also just be much cooler to see Harper homer off Rob McElhenney at Citizens Bank Park.