'Jackass 4' could happen if Johnny Knoxville jumps on board, Steve-O and Chris Raab say 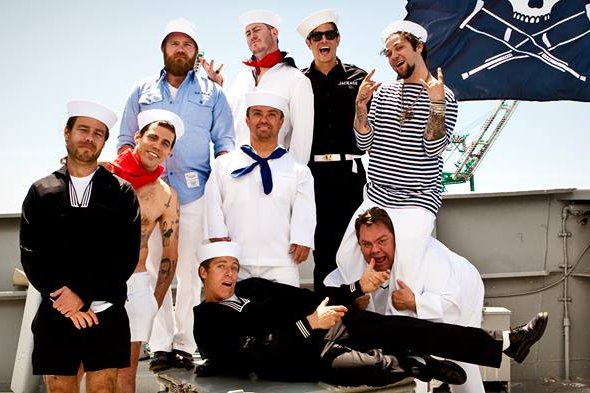 Steve-O and Chris Raab, "Raab Himself," believe "Jackass 4" could happen if Johnny Knoxville is interested in making the fourth film. Their third film, "Jackass 3D," was a box office success. It's been nine years since the last film's release.

Another "Jackass" film could be on the way if Johnny Knoxville agrees to do it, original cast members Chris Raab and Steve-O said.

In two separate interviews with Loudwire, the former cast members were asked about the fate of another "Jackass" film since the franchise's mega-hit, "Jackass 3D," was released in theaters in 2010. While both had their concerns on another film being made, they both felt it was possible.

Montgomery County native Chris Raab, who has interviewed almost every "Jackass" member on his podcast, "Bathroom Break," noted "everyone's pretty interested in it."

He added, however, "I'm not sure that it would ever happen," mentioning how Ryan Dunn, who died in 2010, was such an integral part to the original cast. He was also quick to note the busy schedules of everyone involved, specifically co-creator and executive producer Spike Jonze, director Jeff Tremaine, and star Johnny Knoxville.

Steve-O agreed with Raab. He said that Knoxville is the "determiner" for the fourth film. "I call him the captain for a reason," he said. The star had previously said that he did not think "Jackass 4" would happen, which he said was partially due to their age, health concerns, and Knoxville's seemingly waning interest in the film. Though, his view on the matter has changed.

“We’re approaching the 20-year anniversary of when 'Jackass' first came out on MTV," he said. "I do know that there’s an urge, an idea to commemorate that anniversary in some way. It could be small; it could be big. I don’t know what’s going to happen.”

"Jackass" aired on MTV in 2000 with Bam Margera, Steve-O, Chris Pontius, Dave England, Ryan Dunn, Brandon DiCamillo, Ehren McGhehey, Jason "Wee Man" Acuña, and Preston Lacy. Chris Raab, "Raab Himself," made several appearances on the show and films. He was also a cast member for the "CKY" video series with Margera and Dunn.

In a 2018 interview to Entertainment Weekly, Knoxville said that a fourth film was possible. “It’s not like we’re saying no. If we did do a new one, we’d have to bring in some new younger guys— just to bring some fresh blood into it. But it’s possible."