The popular Chicago rapper makes a passing reference to the Birds, and by extension their Super Bowl victory 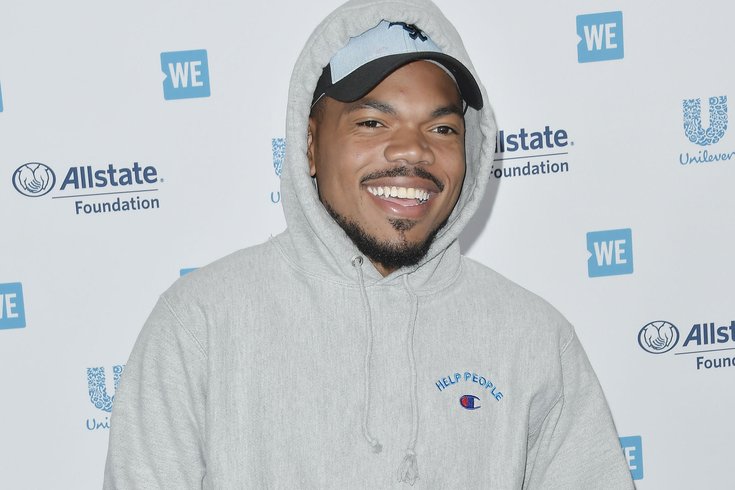 Chance the Rapper, shown here at an event in California, released his debut album July 26. The song 'We Go High' contains a shoutout to Eagles fans, and a passing reference to their Super Bowl victory.

Chicago-based artist Chance the Rapper released his debut album "The Big Day" on Friday, a momentous event in the hip-hop world. Chance released three critically-acclaimed mixtapes between 2011 and 2016, and then took three years off between official project releases.

The album features a litany of big-name co-stars, 22 songs and 77 minutes of music, and one reference to the Philadelphia Eagles.

Chance's Eagles shoutout comes on the album's fifth song, "We Go High", which breaks down relationship struggles and interpolates former first lady Michelle Obama's famous "We go high" line from her speech at the 2016 Democratic National Convention in ... Philadelphia.

While talking about rekindling a relationship's former spark, Chance drops this couplet:

"Big hands for my ring, I'ma need a Pringles can/I just want the shine back like a Eagles fan"

You can listen to the entire song below, for more context. The reference comes at the 0:45 mark in the song.

Chance is a documented Chicago sports fan, so he's definitely not declaring his love for Philly's most beloved sports team. It could be perceived as a slight dig, I suppose, at the team's inability to defend their Super Bowl title last season, even though defending a Super Bowl title is one of the harder things to do.

It could also be a begrudging show of respect from Chance, whose Bears were bounced from the playoffs by the Eagles with the double-doink this past winter.

For what it's worth, Chance tweeted this when the Birds finally won their first Super Bowl:

Whatever the case, it sure is fun to live in a world where rappers and singers can reference the Super Bowl champion Philadelphia Eagles.