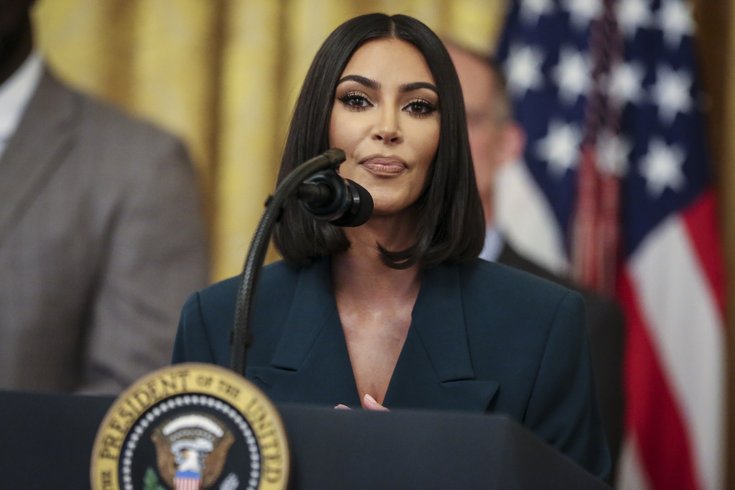 Kim Kardashian, shown here speaking at the White House in June, visited Harrisburg and hung out with second lady Gisele Fetterman this week.

Pennsylvania's political world recently got a dose of A-list celebrity, and we're all wondering what's going on.

Kim Kardashian — yes, that Kim Kardashian — was spotted in Harrisburg of all places on Wednesday, when Gisele Fetterman, Pennsylvania's second lady, posted a photo of the two hanging out together.

MORE: John's Roast Pork named one of the 33 best sandwich shops in the U.S.

We can't tell you why, or how, this happened. Lt. Gov. John Fetterman's press secretary told PennLive only that Fetterman "is just an extremely outgoing, friendly and kind person who makes friends everywhere she goes."

I looooove when friends come to visit 💁🏽‍♀️👯‍♀️💕💕

As you can see above, Fetterman does indeed refer to Kardashian as a "friend" in her post. Did you know Gisele Fetterman and Kim Kardashian are friends? Now you do. You're welcome.

It's also possible that Kardashian is a fan of Fetterman's Free Store initiative. Fetterman founded Free Store 15104 in Braddock, Pennsylvania, years ago when her husband was still mayor of the town. Free Store 15104 receives surplus, donated goods like clothing and furniture, and redistributes the items to residents in need across Pennsylvania's Allegheny County.

Free Store actually helped Fetterman establish a few Hollywood connections a few years ago, when set clothing used in the 2015 film "Fathers and Daughters" was donated to Fetterman's shop. Perhaps word got around Hollywood about the Free Store, and Kardashian was inspired by Fetterman's mission.

In any case, a true-blue celebrity decided, seemingly of her own volition, to visit Harrisburg this week. The state capital may never be the same.