John's Roast Pork named one of the 33 best sandwich shops in the U.S.

Thrillist's list included just one of Philly's myriad sandwich titans, but at least it chose a good one 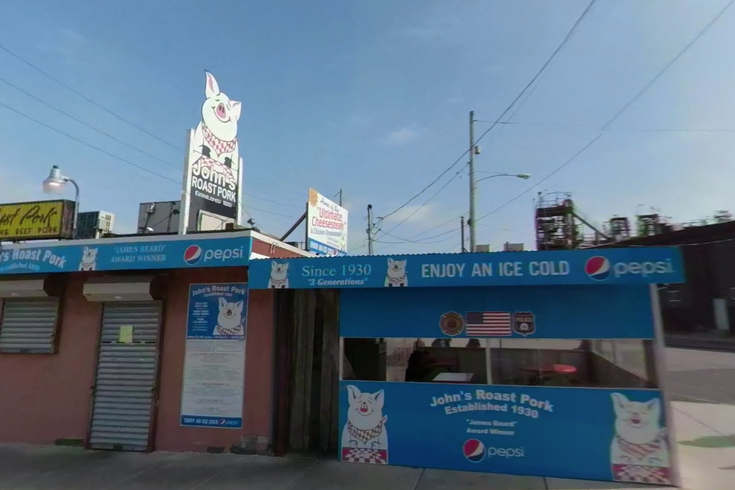 John's Roast Pork, the unassuming-but-legendary sandwich spot in southeast Philly, was named one of the 33 best sandwich shops in the country. We agree.

Culture list website Thrillist put together a collection of the 33 best sandwich shops in the country this month. Unsurprisingly, a Philadelphia legend is part of the list.

John's Roast Pork, the legendary sandwich stop all the way down in South Philly, landed on the list as the city's only representative, and one of two in Pennsylvania. Pittsburgh's Triangle Bar also found its way to the list, though thanks in large part to novelty, which is unfortunate: Western Pa. has plenty of better sandwiches.

The inclusion of John's isn't surprising. The shop has been lavished with praise for years, from celebrity chefs and food folks like Andrew Zimmern to local authorities like Craig LaBan, who once called John's the home of Philadelphia's best cheesesteak.

Below, you can read in full what Thrillist had to say about John's. It's basically a long-winded way of the writer showing they know about Philadelphia things:

"Calling out a Philly sandwich shop whose specialty ISN'T a cheesesteak might seem like a more egregious Brotherly Love blasphemy than preferring a Dennis-less Always Sunny. But, alas, it is the right call. John's Roast Pork's specialty is... obviously... their eponymous roast pork: a truly legendary Philadelphia sandwich with sharp provolone, a surprisingly delicious sautéed spread of spinach (you read that right), and the juiciest smoked pork known to man (or beast).

"But even their cheesesteak, while less heralded than phillies from shops like Tony Luke's, Dalessandro’s, or Ishkabibble’s -- can hold its own against any and all contenders. So it is incredibly difficult to go wrong with any order. Unless you just get a glass of ice water and call it a night. That would be wrong.

"At any rate, they've been making these suckers since 1930 (it's "Pop Pop's recipe" after all) and if the continuous line that forms every day at lunchtime is any indication, it's not going anywhere, anytime soon. For Pennsylvanians, John's is the jawn. Don't worry if you can't understand that -- people from Philly do."

Ultimately, it's not an offensive description. If Dalessandro's has become the Thinking Philadelphian's Cheesesteak during this decade, John's roast pork has run alongside that trend in becoming the Thinking Philadelphian's Sandwich. It's an out-of-the-way spot to get a delicious local staple, one that folks who want to prove they are From Here can point to as a Real Philadelphia Thing that hasn't been overdone by tourists and places catering to said tourists:

Tourist: “I’d like to go to your famous cheesesteak shops, Pat’s and Geno’s!”

Philadelphian: “How DARE you! If you want a real cheesesteak you have to go—”

Another Philadelphian: “Actually the REAL Philadelphia sandwich is a roast pork! Here’s where y—”

A roast pork sandwich, not a cheesesteak, is the best sandwich in Philadelphia https://t.co/atksPqtN6b

Basically, if you're looking for an exceptional sandwich and you don't mind traveling to an extreme location, you should go to John's. Otherwise, Philadelphia is rife with delicious sandwich spots; the entire Thrillist list could've been comprised only of places found in the city, and no one would've complained.