Philly's Jacqueline City is one to watch in the fashion world 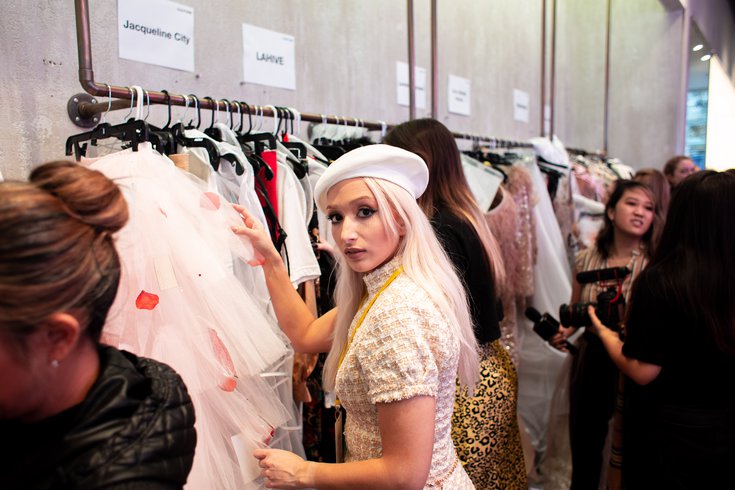 Jacqueline City recently talked to PhillyVoice about her show at New York Fashion Week and living with postural orthostatic tachycardia syndrome (POTS). Here, the young designer is pictured back stage at NYFW.

Jacqueline City hopes to one day see her designs on a superstar celebrity like Taylor Swift, and with her positive attitude and string of successes with her inclusive brand, it's definitely a possibility.

The 23-year-old fashion designer, who lives in South Philly and grew up in the Northeast, launched Jacqueline City Apparel in March 2019. Her brand includes women's, men's, unisex, kids and plus-size up to 5X.

Since then, she's shown a collection at New York Fashion Week and was contacted by Bravo's "Project Runway." She's currently featured in British Vogue's Designer Profiles and is invited to show her designs at Paris Fashion Week next spring at the Ritz Paris.

City also lives with a disability, and it's not something she wants to hide. In a recent phone interview with PhillyVoice, she gave us the rundown on her recent experiences building her brand and shared why she thinks people should talk about disabilities and mental health more.

"I think that (having a disability) is just a part of us. It doesn't define us. It's simply a characteristic of us, like I have brown eyes or I have blonde hair, I have PTSD and I have a disability," City said. "I don't think it's something to hide. I think a lot of people also think that disabled means you're confined to a wheelchair, but there are so many different types of disabled people."

City was diagnosed with dysautonomia, a disorder of the autonomic nervous system, and postural orthostatic tachycardia syndrome (POTS), a form of the disorder, after suffering a brain injury in 2014.

"I was at a concert and a man hit me in the head, and I was rushed to two different hospitals," she said. "I have permanent brain damage from that, so I was unable to finish Drexel University. I had to go home and I was bedridden for quite some time. I lost 50 pounds. I couldn't keep food down. I was fainting every day."

"We thought maybe I had separate stomach issues and separate heart issues and separate brain issues, but they all come from the same thing. It's called dysautonomia, which means that my hypothalamus has damage to it, so it can't regulate anything that's supposed to automatically regulate in my body, from my blood pressure to my body temperature to my digestion," City explained. "I also have episodes of delirium. You get confused. You slur your words. You sound kind of drunk."

City was put on different medications and took up a vegan diet to improve her symptoms, but credits a range of different therapies at Thomas Jefferson University Hospital in Philadelphia as the biggest help.

"It took a long time. I think the biggest thing was the therapy. And having a team of doctors who work together, that understand that you're not making it up, that it's not in your head, that you have real issues that need to be addressed and that they could all be linked," said City.

At Drexel, City was in the music industry program but had to pivot away from that interest after the incident at the concert.

"I was unable to do a lot of the music things that I was doing before, so I just started working on my art when I could. Then slowly I was like, 'I think I should open up my own Instagram boutique.' I just thought it was going to be a little thing with a few different T-shirt designs and then it took off," she said.

City applied to have a collection featured at New York Fashion Week in February through a partnership with a retailer that features independent designers called Flying Solo. Her apparel was selected to be featured in fashion week's Ones To Watch runway show that highlights promising talent. 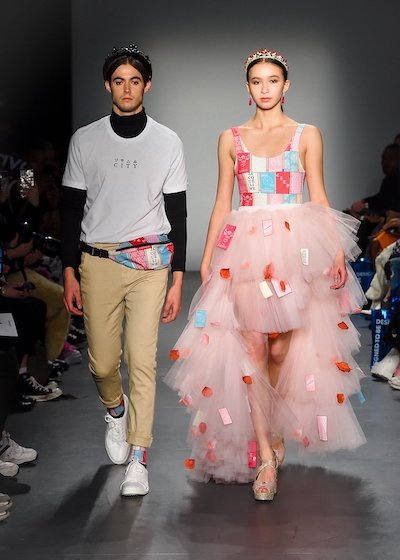 "My finale dress was a big, poofy pink dress with tarot cards that I had designed sewed into it, along with rose petals and gems," said City. "That took probably a month to make. The whole NYFW collection was themed around the lovers tarot card."

"I showed a few of my ready-to-wear so that you could see what you would be able to buy online but (the show was) more about extravagant pieces, about actual art pieces," City explained. "I'm hand-painting, I'm sewing by hand, stuff that I wouldn't be doing with the products that you would buy from my website."

As someone who taught herself to sew from a book at age 6, City was up to the task. She also remembers applying appliqués to her clothes when she was a kid, cutting out paper drawings and using Elmer's glue to stick them to her dresses, despite her mother's scolding that she was ruining them.

Her NYFW debut caught the attention of British Vogue. The magazine reached out about including her in the August, September and October versions of its Designer Profiles section, which showcases up-and-coming designers. It also led "Project Runway" to consider her for the competition series, although according to City both she and the show decided it wasn't a good fit.

"I did a few interviews before COVID-19. It would be too hard for me with my disability is what we ultimately decided because they work sun up to sun down. But it was just very surreal to be thought about and to be pursued for that show because I've watched it since the first season when I was a little girl. ('Project Runway') was definitely a big part of why I wanted to be a fashion designer," City explained.

"A lot of different opportunities came from wanting to create a little T-shirt line on Insta. I think you find where you're meant to be," said City. "Even though I was all over the place, doing all types of art, I think I really fell into what I was supposed to do with fashion." 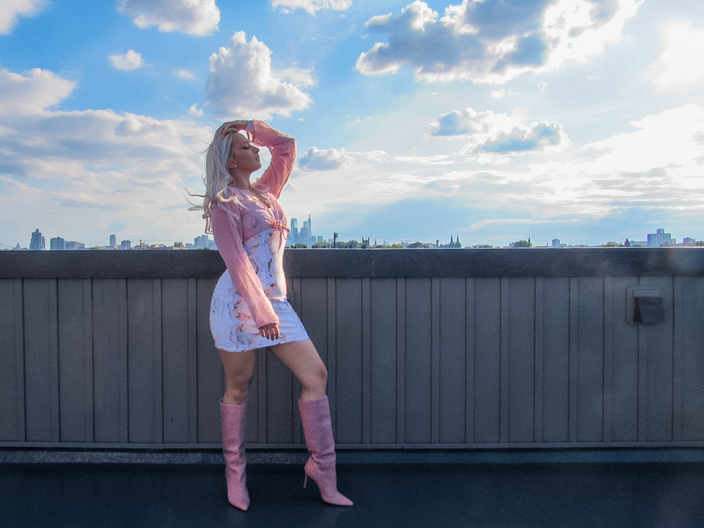 City at a fashion shoot in Philadelphia.

City is hands-on with her brand, from designing to modeling the clothes to running the website. She hopes to grow Jacqueline City Apparel, making sure it always stays focused on inclusivity, but that's just the beginning of her aspirations.

In March, City will make her Paris Fashion Week debut. The original date had been in October, but it was changed due to the coronavirus pandemic. But before that, she has a new collection dropping on the Jacqueline City Apparel website. It will launch the first Friday of September, a few weeks before City turns 24, and it has a birthday theme.

"It's about celebrating yourself. We need some positivity and self love," said City, who chooses not to focus on the "sad parts" of her story. "Just say yes when you're presented opportunities and don't let anything hold you back."