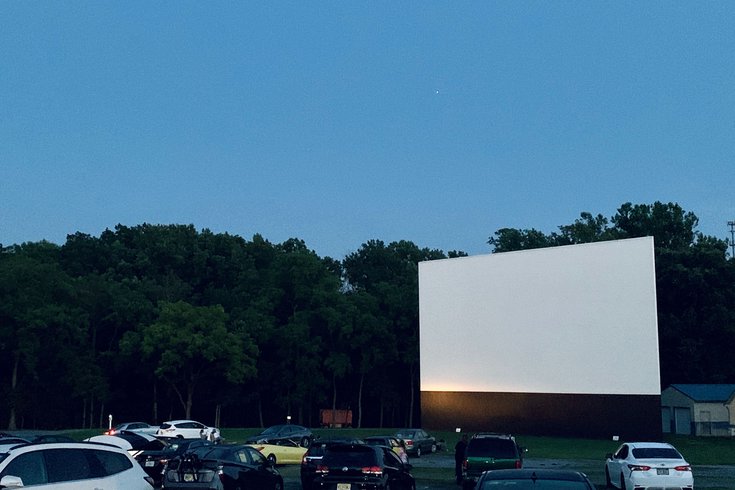 Becky's Drive-In is located in Northampton County. There are two screens, which both show double-features. Audio is available via your car radio and there's a snack bar on site.

With many events canceled this summer due to COVID-19, an old-school favorite is quickly becoming a go-to for a safe night out.

Drive-in theaters, whether well-established or a pop-up edition, are seeing visitors flock to them for socially distant movie nights. Even celebrities have jumped on the trend, with Michael B. Jordan helping to curate a drive-in series across the country.

But what's the experience like? Is it worth the hype to visit a drive-in, or should we stick to streaming shows at home?

I had never been to a drive-in theater, despite Becky's Drive-In and Delsea Drive-In being well-known spots not too far from Philadelphia.

On Wednesday night, I finally got to check out Becky's in the Lehigh Valley area. My mom, sister and I travelled to the drive-in to see the '80s classic "The Breakfast Club." Becky's was showing a double-feature of John Hughes films. The second screening was "Pretty in Pink."

I packed a blanket, slippers, water bottle and Raisinets for the movie.

We arrived about 20 minutes before "The Breakfast Club" was scheduled to start. There was a short line of cars driving in at the same time. A staff member asked us which double-feature we were there to see and directed us to the left lane of traffic.

Becky's has two screens, allowing for two different movie experiences each evening. The other double-feature of the night was Disney's 2016 "The Jungle Book" and "Star Wars: Episode VII – The Force Awakens."

We pulled through to the ticket booth and paid $20 for entry. Becky's offers a "Reel Deal" discount on Tuesdays – $20 per car instead of charging per person, and $1 hot dogs. But the drive-in extended the deal to Wednesday because of Tropical Storm Isaias.

We were then directed to a set of rows where we could park. You're able to park with your car facing toward the screen, if you want to sit in your seats the whole time, or facing away from the screen, if you prefer to open your trunk and sit there. We also saw people sitting on blankets and lawn chairs outside in their parking spaces.

From our spot, cars looked six feet or more apart and we saw people wearing masks as they walked to the snack bar and bathrooms, located between the two jumbo screens.

Once parked, we opened all the windows, turned off our car completely and used a portable radio we had brought to get audio. Becky's broadcasts sound for the movies over FM radio. You can use your car's radio, bring your own or rent one for the evening.

I sat in the backseat of the car but was still able to see the screen well from my vantage point. I also was surprised by how well the sound came through on the radio. Even when our batteries died and we had to quickly change them, I was still able to hear the movie faintly from all the cars around me.

We had packed bug spray for the screening, but we didn't need to use any. No bugs made an unwanted appearance while we were there, maybe because there weren't any lights on in the car.

One problem we did run into, though, was that our car's front window fogged up slightly because of the humidity outside. It may have been better to sit in the trunk or outside of the car.

After Judd Nelson as John Bender raised his fist in the air and the credits started rolling, we turned on our car lights and were able to drive out of the grassy lot before the next movie started. Becky's is located about an hour and a half from Philadelphia, so keep that in mind if you decide to commit to watching back-to-back movies there on a week night.

Overall, I thought visiting the drive-in was a great experience. I've mainly been going to the park when I want to get out of my apartment, so it was a welcome change of scenery. And even though I've seen "The Breakfast Club" so many times, it was fun to watch it from someplace other than my couch.

At a time when it's not easy to get together with others because of health concerns, this is one experience that feels both social and safe.

My only recommendations are to have snacks and water on hand for the movie, wear something comfortable and be prepared in case things go wrong, like packing extra batteries for your portable radio or a beach blanket to sit outside. Also, do your research to see if the drive-in offers any discount nights.