'Jeopardy!' contestant: 'What is the love ballad of Turd Ferguson?' 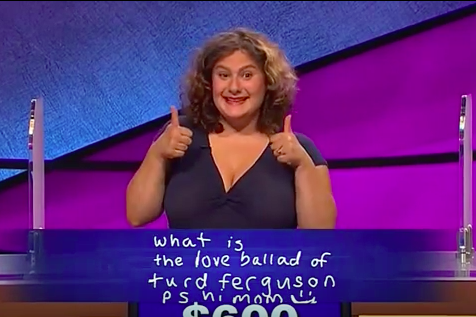 Talia responded to the Final Jeopardy question with an ode to SNL character Turd Ferguson.

For the "Final Jeopardy" question, host Alex Trebek asked contestants to name the song "from a 1999 animated film about censorship."

Talia decided to dedicate her answer to a well-known SNL character from the show's "Celebrity Jeopardy" skit, played by Norm MacDonald.

"What is the love ballad of Turd Ferguson. PS Hi Mom :)," she wrote.

As his job requires, Trebek read the answer out loud, and the crowd laughed along.

MacDonald, who plays Burt Reynolds for skit, calls himself "Turd Ferguson" because, "it's a funny name."

Talia may not have won the game, but needless to say, SNL fans loved the answer and took to Twitter to praise her.

Someone on Jeopardy didn't know the final answer so they answered it "Turd Ferguson". That's got to be the best answer of all time #SNL

The woman who got Alex Trebek to say turd ferguson is my hero....

Apparently, Turd was part of the GOP debate Wednesday night, too.

Check out the SNL character in action below.