'The Geator with the Heater' had a career spanning nearly seven decades. There also were allegations linking him to mob associates. He died of a rare neuromuscular disease 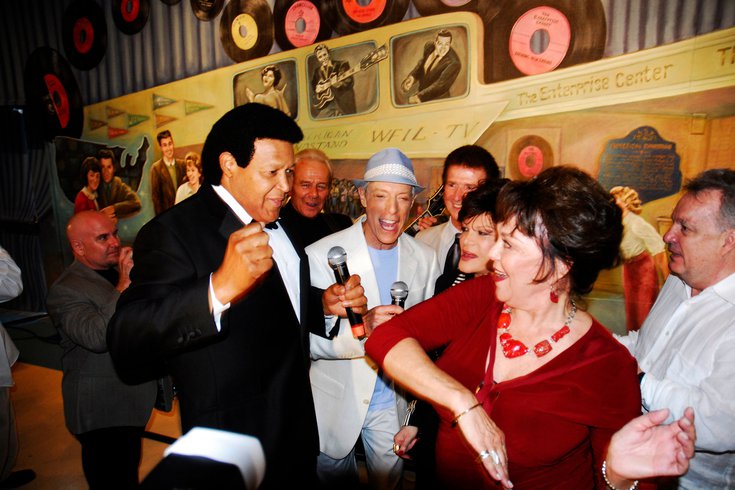 Disc Jockey, performer and South Philly-native Jerry Blavat died at age 82 early Friday, Jan. 20, 2023. Blavat, center wearing a hat, is pictured above with pop singers Chubby Checker, left, and Connie Francis, standing near Blavat. Checker is dancing with Kathleen 'Bunny' Gibson, know for her time as a dancer on 'American Bandstand.' Blavat also was a dancer on the show early in his career.

Jerry Blavat, the Philadelphia radio DJ, performer and music influencer who danced as a teen in the early days of "American Bandstand" and was known to his fans as "The Geator with the Heater," has died at age 82.

After dispelling rumors of his death, which circulated on social media on Thursday, Blavat's representative confirmed in a Facebook post on Friday morning that he had died at 3:45 a.m. at Jefferson-Methodist Hospital in South Philly. His cause of death was myasthenia gravis, an autoimmune neuromuscular disease.

LATEST: Jerry Blavat's funeral on Saturday, Jan. 28, is open to the public; it also can be watched live online

Blavat's career spanned seven decades, and he had plans to continue working. He had an oldies show scheduled at the Kimmel Center in Center City on Jan. 28 that he had postponed earlier this month due to his health issues. But as recently as last summer, Blavat was performing DJ sets at the bar he owned for 50 years at the Jersey Shore, Memories in Margate.

Gerald Joseph Blavat was born to a Jewish father, who was a bookie, and an Italian mother, who worked as a riveter in the Philadelphia Navy Yard during World War II. He grew up on South Bancroft Street, a little street west of Broad in South Philly, and in a 2011 interview he talked about being raised in broken home with a father who wasn't around much. In 2020 he told PhillyMag:

" ... (W)e would get picked up on Friday. It's the only time we saw our father — on Friday when he was uptown and he would take us to the movies, me and my sister. But we would go uptown, and we'd meet him at Broad and Locust, where all the Jewish guys were. And they were dressed to the T, and then we would go into the bar and they'd be drinking scotch and soda.

Blavat credited his mom for his dancing skills.

"The Italians, when ever that radio was on, they would start to dance," he said. "And I watch my mother's steps and I danced the jitterbug with my mother."

His first big break as a performer occurred when, at the age of 13, he became a dancer on "American Bandstand," first when the show was hosted by Dick Horn and later when Dick Clark took over. He grew up watching "Bandstand" and said some of his aunts and uncles appeared on the show, which was filmed in West Philly.

Since he was too young to dance on the show, Blavat said he sneaked into the studio through a side door the first time he appeared. Ultimately, producers were impressed with his dancing and let him stay.

Blavat converted the attention he got on "American Bandstand" into jobs as band manager, promoter, and even had acted in television shows and movies. But he is best remembered as a disc jockey with a knack for knowing the next hit song or hot act.

It was on the radio that he became known as "The Geator with the Heater" and "The Boss with the Hot Sauce." In the heyday of radio, DJs became celebrities and often created on-air personas. The word Geator had morphed from gator, which was short for alligator. Some reports say that nickname originated with Blavat's grandfather.

In 2001, the New York Times wrote that his names were related to Blavat's "manic and rebel style."

"(Blavat) said, if you were turning the dial on the radio and came to his show, it would eat you up quickly as an alligator," the Times article said. In South Jersey Magazine, the disc jockey explained the origins of his nickname like this:

"I had to come up with a name. I'm at the end of the dial, I didn't intend to be a disc jockey, but I snatched these kids up. An alligator lives in the mud. They don't bother you, but if you get close to it, it snatches you up. I'll be a geator, derived from the alligator. What could I rhyme that with – the car heater? When we were kids, in the wintertime we'd jump in the car and turn the heater up. When it got too hot, we'd turn the heater down. Parents were yelling at their kids to turn that guy down, so I became the Geator with the Hot Heater."

On the radio, Blavat was unabashed advocate for the Philly Sound, the genre of soul music that originated in the city the 1960s and 1970s and was created by songwriters Kenny Gamble and Leon Huff, among other. Popular Philly Sound artists included The O'Jays, Harold Melvin & the Blue Notes, and The Delfonics.

Blavat's reputation and influence in music traveled beyond the strength of the signals of the Philadelphia-area radio stations where he worked. He introduced audiences to up-and-coming talents such as the Isley Brothers and the Four Seasons, and he became friends with acts like Bobby Rydell, Sammy Davis Jr., and Frank Sinatra, among others.

Proving his influence endures, Blavat was referenced in June 2021 on an episode of "Jeopardy!" in June 2021 with the clue, "Longtime Philly DJ Jerry Blavat helped popularize this 'explosive' rhyming phrase for something good out of the old days."

The correct response, "Blast from the past."

Do you know the question?

Congrats to our man, pots and pans, the boss with the hot sauce, Jerry Blavat on being a #jeopardy answer last night. 📷 @gunnforhire1 pic.twitter.com/1wkY7rd9Ds

There have been pitfalls, bumps and negative headlines in Blavat's career and life, like when 2002, when there was a proposal to spend $25 million and create a Hip Hop Hall of Fame in Atlantic City, Blavat panned the idea, saying, "What does hip-hop have to do with Atlantic City? Who is going to remember hip-hop 20 years from today?''

Much more seriously, there had been persistent rumors Blavat was connected to the mob in South Philly, something he flatly denied in the 2020 article in Philadelphia Magazine, though he admitted he knew South Philly mob bosses Phil Testa and Angelo Bruno.

Blavat would say he was childhood best friends with Bruno. He described growing up in the neighborhood with various organized crime figures, how Bruno's grandkids would to come swim at the pool at his home in the suburbs and how he would drop them off at Snyder Avenue at the end of the day.

"When (Bruno) died … (his family) said, listen, you're almost like a family member here. We don't want this funeral to be like a circus. You know the newspaper guys. You know the guys who have been following Angelo," Blavat said. "Would you be at the door and make sure only the mourners are coming in?"

He always distanced himself from any criminal activity connected to Testa, Bruno and their associates.

In 1981, Blavat was among six other people at a table eating dinner with Greek mobster Chelsais Bouras at South Philly restaurant when Bouras was shot in the head and killed by two masked gunman, who also killed Bouras' companion Jannette Curro.

Then in 1992, when New Jersey officials were investigating the influence of organized crime on the liquor business, particularly the control of bars and restaurants in the state by crime figures being used to lauder money, traffic drugs or simply as mob hangouts, Blavat was called to testify. He pleaded the fifth when asked to questions about paying a $500 a week street tax to another South Philly mob boss, Nicodemo Scarfo, in order to keep union organizers out of Memories in Margate.

Another witness testified at that hearing that Blavat had served as the frontman to buy a $40,000 yacht for Scarfo. A few years later, the New Jersey State Commission of Investigation published its report stemming from this investigation. It contained details about Blavat purportedly approached Scarfo about killing another prominent Philadelphia DJ Hy Lit.

Scarfo refused to order the hit, according to the details of the report, but the revelation of Blavat's request resulted in this classically awkward and uncomfortable face-to-face with the DJs on Wally Kennedy's TV show "AM Philadelphia."

Blavat's funeral will be open to the public, the details were posted on his Facebook page. It takes place Saturday, Jan. 28, at the Cathedral Basilica of Sts. Peter and Paul, at 1723 Race Street. There will be a viewing at 9 a.m. followed by a funeral Mass at 11:30.