Halfway between Memorial Day and Labor Day, shifting fortunes in the definitive list of seaside resorts 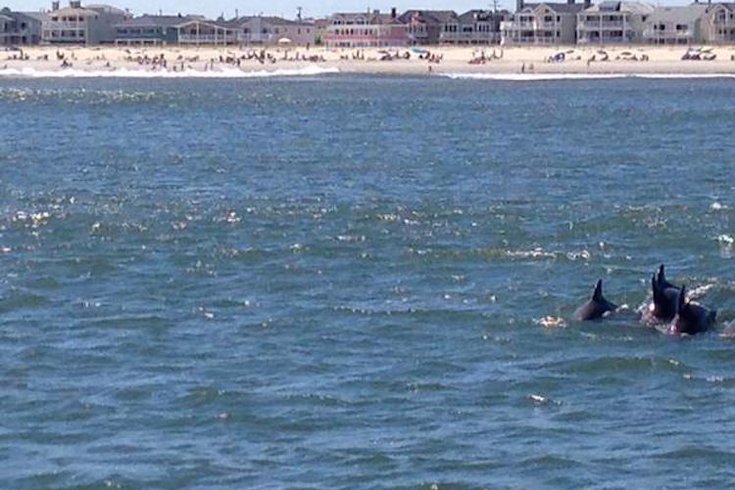 Dolphins, like these four seen off the coast of Ocean City several years ago, are the coolest.

We are at the halfway point of the traditional summer season. Where did the time go?!

It seems like just yesterday when droves of folks flocked to the shore to celebrate Memorial Day Weekend, and Labor Day will be here before you know it.

Such is the nature of time itself. Nothing gold shall stay. Not even the top spot atop the Definitive Jersey Shore Power Rankings (DJSPR), which has been held (or co-held) by eight of the 16 communities under weekly consideration.

Will any of the others find a way to the top between now and Sept. 5? Nobody knows! Well, actually, anybody who reads to the bottom of this post will know. Because there's a new town atop the rankings this week!

What a time to be alive. Let's get to it.

16. Atlantic City (-14) This precipitous drop can be chalked up to two connected incidents. One: Justin Bieber was in town this weekend. Two: The Biebs “got miffed by a fan who attempted to throw a hat at him right in the middle of his sincere speech about not giving up on yourself when you're having a bad day. He calls the guy out, finishes the speech, and then calls the guy out a second time before getting on with the music.” Aw. Poor fella. Don’t give up.

14. North Wildwood (+2) Remember that American flag that got stolen around the Fourth, the one that was draped upon the casket of former Navy seaman Patrick M. Corcoran who died during the Vietnam War? Yeah, it was returned. That’s good. But the stain lingers.

13. Long Beach Island (+2) Imagine that you drop ten grand on a two-week rental. Imagine that you arrive at your five-figure rental property and see dredging equipment and signs that read “Danger high power dredging.” You’d feel worse than a lobster-hued John Candy in “Summer Rental.” You’d scoff at Realtor claims that they’re not responsible for your ruined vacation. You’d never want to go back to LBI again.

12. Cape May Point (-2) Birders have seen the black-capped chicakadee here. That’s all we got.

11. Wildwood (+1) PokemonGo has reached the Boardwalk. Also, there was a crab festival this weekend, and crabs are good to eat. I mean, they may not be worth the work that goes into getting minimal meat from ‘em, but it’s summer, and the world’s a truly frightening places these days, so if it takes more time to eat, it’s less time to pay attention to the horrors all around us.

10. Ocean City (+4) Mixed bag for the dry town this week, but one that resulted in a rankings jump on account of the sins of similar communities. Night In Venice is a pretty cool thing, for sure, and despite the hellish effect it has on traffic and limited island entries. But from the negative perspective – which will be factored into future week’s definitive rankings are the fact that you shouldn’t fire firefighters for being medical-marijuana patients. That’s nothing short of ignorant. Nor should you try to pass funny money on the Boardwalk. That’s nothing short of tacky. At least they're haranguing people who feed gulls, now; good God, those people are the worst.

9. Longport (+2) The 19th annual Longport Women’s Lifeguard Invitational took place last week. Congrats to all who competed – whether you won or not – and thanks for all that you do.

7. Margate (+5) and Ventnor (-1) You people think you’re too good for jitneys? You aren’t. Nobody is. Only reason you got a bump this week, Margate, is because the Definitive Shore-Town Power Rankings (DSTPR) machine heard good things about your farmers market. And the only reason your jitney snobbery didn’t cost you more standing was an email received regarding the summer concert series, Ventnor. Beleedat. Also, vote for Lucy the Elephant.

6. Brigantine (+3) Took a spin through town regarding a story that will (probably) run later this week. It’s a lovely blend of borderline overbuilding, commitment to traditional shore houses, remarkable views, easy access and sea air. Might not get as much credit as it deserves.

5. Strathmere (-4) Last week’s top ranking must have gone to this town’s head. Now, it’s as bad as Ventnor and Margate with the jitney snobbery. With great power comes great responsibility. In this regard, Strathmere has failed.

3. Wildwood Crest (+2) Good luck to Crest’s own Joe Maloy, a triathlete repping the stars and stripes in Rio next month. Bring home the gold for yourself and country, you might well bring home top billing on the DSTPRs.

Dude set up an all-time championship-winning shot, one that got me to turn on a dime about the need for a Villanova parade in Center City. He shouted out an address near my favorite shore bar. That’s the type of swag that gets a resort town rebounding from bouts with lawlessness. Won’t be long now, Sea Isle.