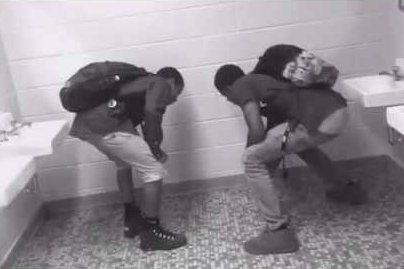 Nearly 200 students stormed out of a New Jersey high school Wednesday morning to protest the suspension of several peers who had produced a profanity-laden rap video at various locations on school grounds.

An online petition with 750-plus supporters claims Egg Harbor Township High School officials overreacted when they suspended the teenagers for 10 days due to the explicit language, themes and rambunctious behavior depicted inside the school building.

The video, called "EHTHS//The 609," was directed by an unidentified artist who goes by the name "TonyBeatz" and features the song "Outro" by Philadelphia rapper Meek Mill. Originally posted over the weekend, it was later removed and republished. As of Wednesday night, the YouTube video had amassed more than 20,000 views. (Warning: Video contains explicit language).

At different points in the video, students are seen dancing and fighting in the halls, playing dice in the bathroom and standing on classroom desks. There are no school staff members present in the video, and it remains unclear how the suspended students managed to film in areas where supervision might generally be expected.

In a Facebook post Tuesday, the Egg Harbor Township School District issued a statement on the video.

Around 11 a.m. Wednesday, in response to rumors about disciplinary action, supporters of the suspended teens staged a temporary walkout at the high school, according to Shore News Today. A school district spokeswoman reportedly described the scene as "orderly" and said the students eventually agreed to return to the building.

The change.org petition describes the suspended students in a positive light.

"Most of these kids take honors and AP classes, the creator of the video is also involved with the National Honor Society," the petition says. "We believe these kids were treated harshly."

To address the concerns of students and discuss their rights, the administration has scheduled an after school meeting for Thursday afternoon.