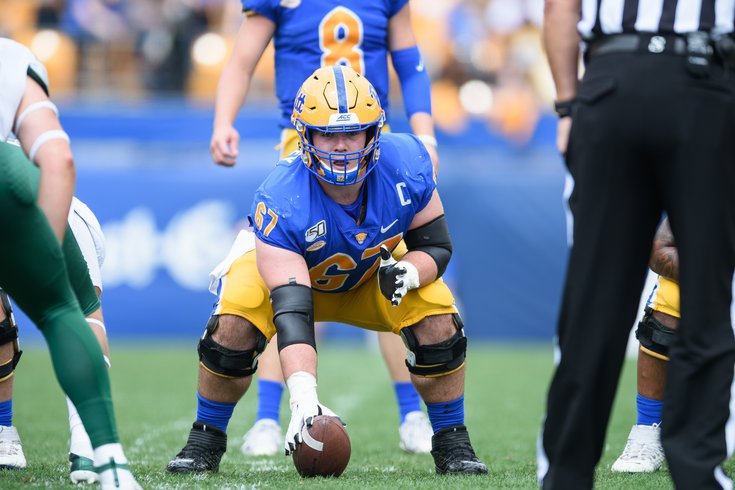 The La Salle High School senior offensive lineman thought for a moment about tossing the pen in his hand and saying the hell with it. But Morrissey always had a hidden penchant for defiance, an inner nuance that demanded he wouldn’t be defined by anyone except himself.

He carried a dream of playing Division I football. The big problem was nobody was knocking on his door, because he was deemed “too slow,” “too short,” “too small,” by the walking clipboards, and those colleges that were interested only offered half scholarships.

That’s when Morrissey began seeing another vision. He jotted down life goals on the legal pad: Division I scholarship, three-year starter — unattainable to college recruiters — though not to him. He committed to the University of Pittsburgh, taking the chance as a walk-on, when he could have gone to a lower-level school and probably had a greater chance to start sooner.

As the sun was falling on Saturday, May 1, Morrissey, a 2016 La Salle grad, was looking out at the Atlantic Ocean from the back porch of his parent’s Cape May, New Jersey home, feeling the pangs of that shadow creep back up.

No one called yet on the third day of the NFL Draft. The “toos” were haunting him again. That’s when Morrissey, 22, snapped back and remembered his new list. The one, this time, that included playing in the NFL. Minutes later, he received a phone call from Mike Mayock, general manager of the Las Vegas Raiders, telling him that he was their seventh-round draft pick.


The sudden call ended one journey for the 6-foot-3, 305-pound, three-time all-ACC center and begins another.

A two-year La Salle starter, Morrissey defied long odds in walking on to become a four-year starter at Pitt after being bypassed by many. He is ready to defy more and prove he’s worthy to play in the NFL.

“Some things that you hear never go away, and even after I made it at Pitt, I was still pissed off and I still have that chip on my shoulder today,” admitted Morrissey, who earned his bachelor’s degree in finance and marketing and was attending graduate school his final year at Pitt. “When we played Boston College last season, all I thought about was that BC coach that said I was too small to play for him.

“That still motivates me when I work out and play on the practice field. The times I feel sorry for myself, I always revert back on being a walk-on. I think being a walk-on is going to help me with a lot of things in life, but there is no doubt about the fact I was pissed off.

“My blood is kind of boiling over right now thinking about it. I’ll never forget I was a walk-on and when I came in Day One at Pitt, that’s the only thing that I thought about. I would have fun with the guys and joke around, but I would always have to revert back to, ‘Hey Jim, you’re a walk-on. These guys don’t think you belong here,’ and that’s what was always in the back of my mind.”

Someone, it appears, who never had any doubts about Morrissey was John Peterson, then the offensive line coach at Pitt, currently now coaching offensive tackles/tight ends at Youngstown State (Ron Jaworski’s alma mater).

During the recruiting trail, Morrissey attended camps at Temple, Pitt, BC, Harvard, Yale and Lehigh. He received half offers from Lehigh, Bucknell and Colgate. He had spoken to Dartmouth in December 2015 about a visit in January —then the Dartmouth coach called to cancel.

“Jimmy fit mine, he was going to end where he was going to end, because that’s who he is,” said Peterson, who was at Pitt from 2015 to 2017. “The one thing you can tell in camp evaluations is that Jimmy was intelligent, and came from a well-coached program at La Salle. His individual technique and one-on-one pass protection were very good.

“What’s really developed was Jimmy’s God-given speed. From the day he walked on at Pitt, he put his head down and was willing to do whatever it took. He competed every time he was on the field. I know he heard all of the measurable things from other schools, and that goes to show you the millions and millions of dollars the NFL spends on scouting that at the end of the day it’s an inexact science.”

La Salle coach John Steinmetz was the first to see Morrissey’s uncompromising drive. None of this surprises him. Steinmetz kept trying to sell Morrissey to college coaches that they needed to look beyond the numbers. Morrissey has never been afraid to walk into a dark room.

“Jimmy received no (full) offers from anyone, only half offers, but he had always said he wanted to play at the highest level he could,” Steinmetz said. “When he made Pitt as a walk-on, that didn’t surprise me. But when he came up his junior year at Pitt, I started to think he has a great shot at being drafted. 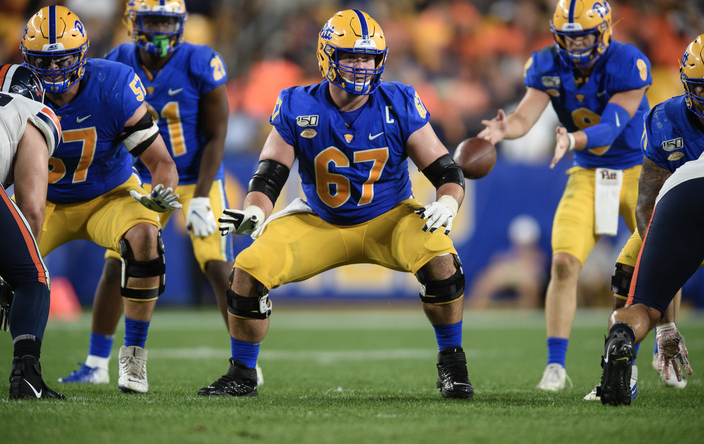 Steinmetz and Peterson continue to see the intangibles others aren’t willing to see in Morrissey—envisioning him, barring injury, playing a long NFL career.

“Jimmy is a kid with a hunger to be a success,” Peterson said. “Size-wise, Jimmy is a lot like Corey Linsley (Los Angeles Chargers). That’s the body type he has, and the style of his play. What people will find out about Jimmy is that he can play guard, too, and he is who he is, and he knows who he is. He’s going to be a technician who will play with great intelligence and technique.

“He knows how his body moves to be the most efficient player he can be, using leverage and he has a very good balance, and his intelligence sets him apart. He has a high FBI — football intelligence. Jimmy does more than just studies film. He’ll come back later and cut up blitz packages. I’m absolutely proud of Jimmy — and someone I’ll have a life-long relationship with.”

Mayock echoed many of the same sentiments as Steinmetz and Peterson did. Mayock was enticed by the fact Morrissey was a walk-on who went on to 47-straight starts and was a two-time team captain. Raiders’ offensive line coach Tom Cable didn’t have to twist Mayock’s arm when it came time for the No. 230th overall.

“Tom Cable watched him and Tom loved Jimmy. He thought he was quick, instinctive, smart, tough, and all of the things that translate to a center playing in the league for a lot of years. The combination of the scouts and the coaches being comfortable with him pushes us to drafting him.

“That’s what we think Jimmy is. All of the intangibles are there. It’s just a matter of when we put the pads on, can he move people off the line of scrimmage.”

Where Mayock was direct in his appraisal of Morrissey, Pitt head coach Pat Narduzzi had a different approach.

After red-shirting his freshman year, Morrissey began moving up the Panthers’ depth chart his sophomore year. He vaulted from third-team center to sharing time with the starting center. Two weeks into training camp, Morrissey won the job, though was wondering why, since all starters are scholarship players, that Narduzzi never called him into his office to tell him he was on scholarship.

Compounding that was a bad day at practice.

Panthers’ fifth-year senior quarterback Max Browne kept fumbling Morrissey’s snaps. He was a walk-on trying to establish himself, and now to have this happen?

Snap after snap, something went wrong. Browne would tell Morrissey that he hit his bottom hand too hard. Or that the snap clipped the side of Morrissey’s leg. It was one thing after another. Morrissey kept questioning himself; beginning to think he was blowing his chance to start. He felt the exchanges were clean. Browne assured him that they were—and he was the one making the mistakes.

A few whistle toots and the nightmare practice ended, though not for Morrissey. Narduzzi began ripping the embarrassed red-shirt in front of the team, “We can’t have these fumbled snaps in the game. Morrissey, get up here and get a couple of snaps with Max!”

Head down, a chagrined Morrissey approached Browne, who handed him an adorned painted ball that said, “Congrats, Jimmy, you’re on scholarship!” to the applause of the Pitt team.

“I’ll never forget that,” Morrissey said. “Coach Narduzzi had it planned that Max would purposely fumble the snaps. Here I am getting heated, wondering what the hell is going on (laughs) — and then that.

“I’ll remember that for the rest of my life. The phone call to my parents later that night is something that I’ll always remember, right up there with telling them that I was drafted by the Raiders.”

Morrissey left for Las Vegas on May 16 for rookie camp. He’s going to work out in Pittsburgh before training camp begins in July. He wants to find time to get back home to Huntingdon Valley, Montgomery County, where he’ll no doubt go to his desk drawer and pull out the small, white legal pad again.

Time to jot down a new set of goals to fulfill.