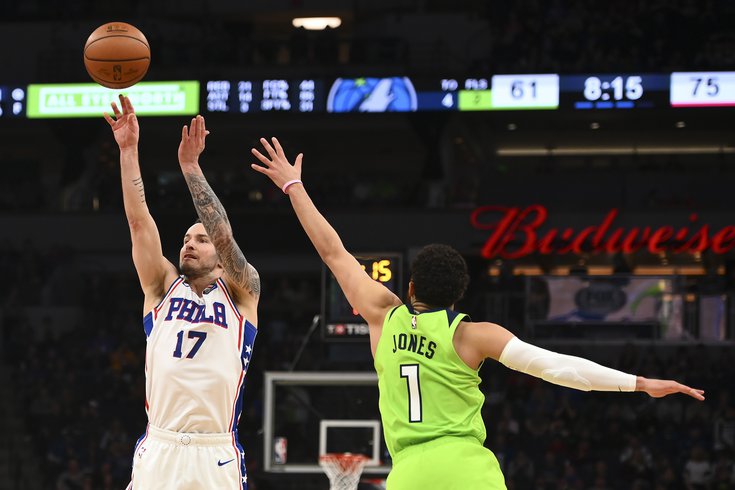 JJ Redick shoots for three as a Sixer back when they played the Timberwolves in March 2019.

JJ Redick will always go to bat for Philly, despite getting booed on occasion and his disdain for the local sports talk radio.

While calling Tuesday night's Celtics-Warriors summer league game for ESPN, play-by-play man John Schriffen brought up Redick's time with the Sixers and the former sharpshooter jumped right into his love for the city and what could've been.

Schriffen: "How many autographs did you sign in Philly?"

Redick: "You know, I always think to myself 'If I had won a championship [in Philly], if our group had done that together'...Joel Embiid, Ben Simmons, [Jimmy Butler], [Tobias Harris], if we had accomplished that...we would never pay for a meal in Philly ever again. We'd be GOATed in Philly. It'd be a good feeling."

Schriffen: "It is one of the greatest sports towns in America..."

“They boo you, the sports radio talk shows are delusional, but despite all that Philly is the greatest sports town in America” - @jj_redick pic.twitter.com/2cFjLknkt6

Eh, nobody, or, nowhere is perfect, right?

Philly cares deeply about it sports, and for some it's a gift, others it's a curse.

Redick, who retired last September, signed with the Sixers in the summer of 2017 as a veteran presence and three-point specialist for the phase of "The Process" that would push the team towards contention.

In two seasons, he averaged 17.6 points and shot .407 from beyond the arc, becoming a fan favorite while the Sixers experienced the most success they've had in years to that point.

Redick left for New Orleans after 2019 but never forgot about his time on Broad Street. He's even said he wished he could have found a way to stay with the Sixers longer.

Probably just isn't in any rush to tune into WIP though.