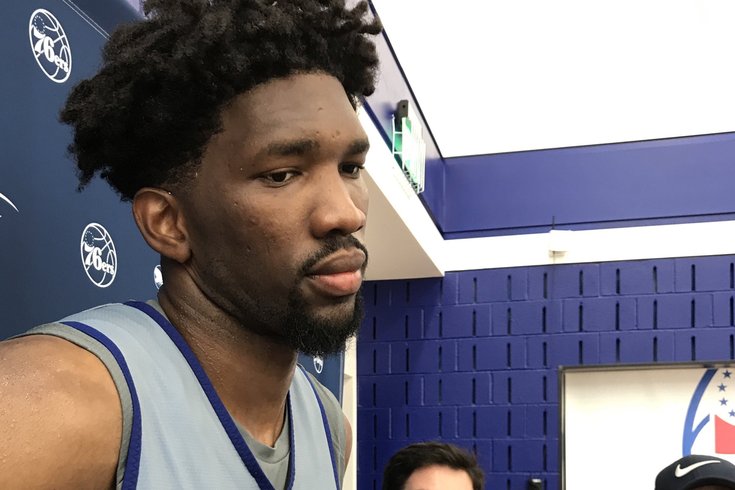 Joel Embiid speaking with reporters after practice in Camden.

One thing is clear the day before the Sixers' season begins: Joel Embiid is not happy about being held back by a minutes restriction. He was taken aback when he found out about his minutes load during Monday's media availability, and on Tuesday, the franchise center met with reporters with a point to make, and he did not hold back.

Below is a full, unedited transcript of Embiid's comments from Tuesday afternoon. Bolded sections are questions from the assembled reporters at the Sixers' practice facility.

The initial minute restriction that you’re on, did they give you any hope that would be lifted at some point?

Can you go in and appeal to them?

I always think I have a voice, so I’m sure they’re listening to what I have to say too, but they’re making a decision based on what they think. But I think that’s bullsh*t.

When does that usually get decided?

I think they’re talking about it right now. I think the number is going to be 16 [minutes] or something like that. I played about that in the preseason and I felt good, I played mostly in the first half and my body felt great. I still gotta get in game shape, but I think I’m ready for more.

What are you feeling yourself that you feel like you can play more minutes than you’re being given?

It depends how I feel – some days my body’s going to respond some other ways, and I’m going to be tired. But from the experience that I got from two preseason games that I played, I felt great in practice, I’ve been pushing myself and doing a lot of work in the weight room too, just to keep my body up. As long as my body feels good, I should just play. It’s frustrating, but once again you have to trust the process.

I don’t think there should ever be minutes restrictions. I think it should always be about how my body feels and how it’s reacting, and if I’m tired.

Do you have any preference of when you want to be on the court?

It’s tough on the coaches. I don’t know how you do that, because I’m sure coach wants me to finish the game. But at the same time, that’s me only playing four minutes a quarter, and just sitting there getting cold, and my body not being ready to go if I have to wait 8-10 minutes and then got to go finish the game too. If you look at it, if I started the third quarter, I have to literally wait like 16 minutes before I go back in and finish the game.

So that’s tough on the coaches, tough on my body too. I think the concept of minutes restrictions is kind of complicated. I don’t think there should ever be minutes restrictions. I think it should always be about how my body feels and how it’s reacting and if I’m tired. And if I’m tired, I’m sure they’re going to see it and they have the right to pull me out. We just gotta work through it.

Do they ever give you a long-term view, or is it a game-to-game basis?

I have no idea on [how they are] making decisions. I think it’s game by game, I thought I would’ve played more by opening night, considering the fact I looked great in those two preseason games that I played, although I rolled my ankle. It’s unfortunate that I stepped on someone’s foot, but I thought I looked great, I don’t know.

Did you have a number in your head?

I thought the second preseason game it was going to get bumped up to 20 [minutes], and then by opening night at least 24.

Have you expressed this to the team?

Yeah, they know that I’m frustrated, but once again you got to trust the doctors. They care about me, it’s all about the long-term view. I don’t know anything about—although I learned a lot about my body the last couple years—I don’t really know all the science behind it all. So like I always say, you got to trust the process.

How much of it is about conditioning vs. past injuries?

I don’t really know. I don’t think I get in shape by running on a treadmill or all that stuff, I think I get in shape by playing basketball, just going up and down pushing myself. I think that’s the way it’s always going [to be]. I still got to lose a few pounds, but I’m going to lose those few pounds by just playing basketball. I haven’t done anything in, what, eight months, seven-eight months? That’s how I always get in shape.

It’s so easy for me, I just need to get one or two, two or three weeks, and then I’m back to where I was. I also need repetition. I looked good the first preseason game, and then the second one I was kind of off, I was trying to push too much.

I think this is a big year for the whole team, and me personally I feel like I have something to prove too. So I want to be out there with my teammates and win some games.