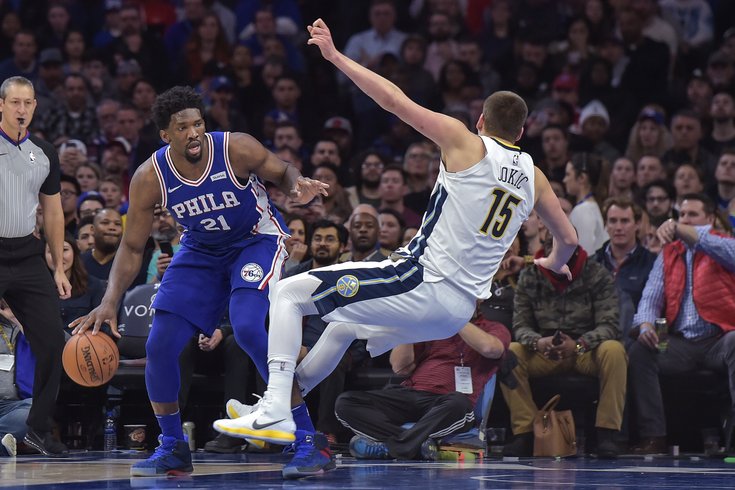 Joel Embiid was named the Eastern Conference Player of the Month, the NBA announced in a press release on Tuesday, setting up the early stages of an MVP battle with Nuggets big man Nikola Jokic.

A month-plus into his fifth season, Embiid is putting up career-best numbers for Philadelphia, leading the Sixers in scoring (28.3 per game) and rebounding (11.1 per game) while playing the most efficient basketball of his life. Bolstered by 40.4 percent shooting from deep, Embiid's 54.4/40.4/84.0 shooting splits are elite for any sort of player but mold-breaking for a big man who is arguably more impactful on the defensive end of the floor.

Those numbers have been complemented by improvements to his game aided by the Sixers' roster changes in the offseason. Though his assist numbers are down this season and his turnovers are currently holding steady compared to past years, Embiid has been noticeably better dealing with double teams out of the post this season, earning hockey assists against a lot of strongside doubles sent his way. His importance to the offense has been hard to overstate, with Philadelphia drowning in most games where they've missed the big man.

Outside of a dramatic win over the Pacers on Sunday, the Sixers have been winless and without a prayer when Embiid sits, a trend that has now carried over through a regime and roster change. Lineups featuring Ben Simmons without Embiid, for example, have been outscored by 11 points per 100 possessions, a 25-point drop compared to when Embiid is on the floor with him. Embiid has had a better time anchoring lineups without Simmons this season than in the past, with the Sixers still outscoring opponents by nearly seven points per 100 possessions in such instances, per the NBA's stats database.

This dominant run to start the season has put him at or near the top of the MVP conversation, and joining him for the first Player of the Month is Jokic, Denver's terrific center who has been forced to carry the Nuggets with his supporting cast injured, out, or otherwise underperforming to start the season. Until recently, Jokic was averaging a triple-double from the center spot, but his numbers remain preposterous even as his assists have dipped a bit — Jokic is holding averages of 26.8 points, 11.8 rebounds, and 8.6 assists per game on 57.4/38.4/83.6 shooting splits, managing elite efficiency on high volume as the hub of Denver's offense.

Historically, Sixers fans have rejected comparisons between Embiid and Jokic as a result of the gap between them on defense. That has held true to some extent this season — Denver's defense has been better by over 10 points per 100 possessions when Jokic sits, though it's also fair to point out their offense has dropped off a cliff without him.

But the big knock against Jokic as it relates to Embiid this season is just a team-centric concern. Denver is 12-8 through their first 20 and sitting in the middle of the pack in the Western Conference, only a game up on the seventh-seeded Warriors and 1.5 games in front of teams currently out of the Western Conference playoff race. The MVP award is predicated on team success as much as anything, and the Sixers are a better current "story" than the Nuggets are, firing on all cylinders under a new coach.

There is a lot of time for the dynamics to change in the race. Missing games doesn't appear to be as big of a factor this year with so many players around the league in and out of the lineup, many awards voters have used games played as a sort of tiebreaker between similar players in the past, often to Embiid's detriment. Jokic has appeared in four more games for Denver already, a gap that may grow over time.

More importantly, we have to ask which trends will hold over the course of a long season. Embiid has shot the lights out on jumpers this season, making an outrageous 62.2 percent of his shots from 16 feet to the three-point line. That figure (and his 40 percent number from deep) will certainly drop as the season goes on, eating into his point totals and overall efficiency, and perhaps even Philly's team success. On the other hand, it's fair to question Jokic's own shooting splits and willingness to shoot — Jokic has had stretches in the past where he has trended too far toward setup man at the cost of his own offense. I'm curious to see whether he keeps his foot on the gas, and if he does, whether he settles closer to the low 30's number from deep he has shoot for most of his career. It's overly simplistic, but the people love points.

(All the more reason Philly's seven-man game against the Nuggets should have been postponed. We only ever get two matchups between these two a year, and one of those has already been lost in the ether.)

And that's before we consider other players who will factor into the MVP discussion. LeBron James is in the midst of another terrific season and will generate buzz as he does every year, especially as voters weigh rewarding him one final individual honor to close out a storied career. Kevin Durant's Nets couldn't defend a CYO team, but he has been masterful since returning from an Achilles injury, dispelling the notion that it would slow him down as a scorer.

For the moment, though, there are two bigs at the top of the race throwing haymakers every night. The league has gotten smaller and quicker over the years, but it's a game where the goal still hangs 10 feet in the air. The big man renaissance has been a great storyline to start the year, especially if you root for the Sixers or Nuggets.