Practice notes: Sixers still trying to master base concepts despite sitting atop the East 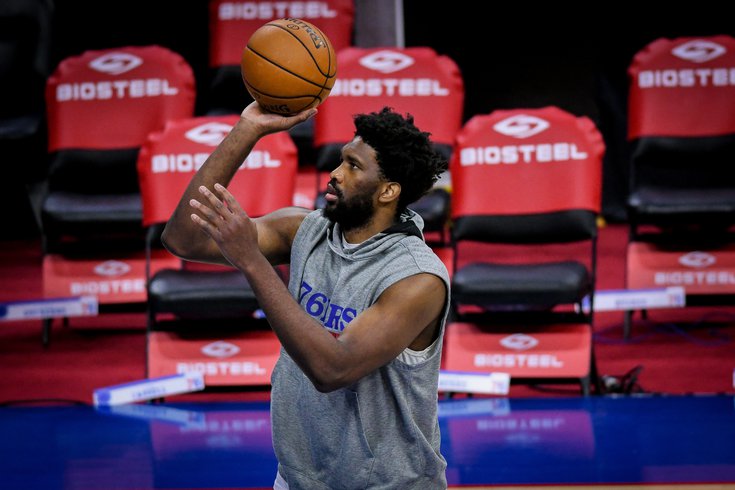 PHILADELPHIA, PA- JANUARY 04: Philadelphia 76ers center Joel Embiid #21 warms up before the game against the Charlotte Hornets at Wells Fargo Center on January 04, 2021 in Philadelphia, Pennsylvania.

Sitting at the top of the Eastern Conference standings and coming off two of their strongest wins of the year over the last week, you would think Doc Rivers' Sixers are in a perfect place as a team. But don't let anybody tell Rivers that. The head coach claims he's completely unaware of Philadelphia's record, choosing instead to focus on all the work left to be done for the Sixers.

Practice time has been scarce for the Sixers this season, moreso than it is during a normal year, with each week filled to the brim with games that make it hard to justify putting guys on the floor for yet another day in a row. With a second consecutive off day on Tuesday, the team was able to get together in Charlotte for a session together, and they're still trying to master their base concepts before moving on to more advanced sets and reads.

In fact, things the Sixers claimed they wanted to work on as recently as Sunday had to get moved down the priority list in order to master their staple sets on both ends of the floor. Rivers told reporters after Sunday's win in Indiana that assistant Dave Joerger had advocated to spend at least 10 minutes of practice working on small-ball looks with Ben Simmons at center, hoping they could get more organized in a look they see promise in. That plan fell by the wayside by the time practice rolled around Tuesday.

"That honestly was at the bottom even though it’s very important for us, because we’re going to need it. I just think right now we [have] other things to work on," Rivers said Tuesday. "We did a little bit of it, I will say that, but we didn’t do enough of it to make any difference yet."

Joerger is not the only guy making submissions to the head honcho for what has to be done at practice. Heading into a practice day, Rivers collects notes from each of the assistants on staff, who he asks to write a list of priorities they'd like to see done during a rare opportunity to work outside of a game. The head coach joked Tuesday that they would have been on the floor for 12 hours if they had gotten to everything the staff had come up with, an exaggeration that nonetheless reflects how far they feel they still have to go.

The good news? That 15-6 record still stands in spite of all the concerns from players and coaches alike about unfamiliarity, communication, and execution. It suggests the Sixers might be able to jump a level or two by the time the regular season comes to a close. There have been few concerns about their Plan A (running everything through Joel Embiid), but Rivers focused a lot of energy Tuesday on making sure everyone on the roster can read and react to plays in real time, turning plays on a call sheet into organic, free-flowing offense.

"I think we have a grasp of the plays, what they are, but we have no idea what we’re trying to get out of it yet, or what we’re doing out of it," Rivers said. "We’re just running it. Today, we grabbed a couple of offensive plays and went piece by piece to show them the first option, the second option, what you’re looking for, how you should come over, the timing."

The same logic applies to the defensive end of the floor. Assistant coach Dan Burke has extracted a lot out of this group so far, getting career-best efforts out of guys like Tobias Harris and utilizing Joel Embiid in a wider range of coverages than what we have seen in the past. Playing "up to touch" has been a new phenomenon for Embiid in pick-and-roll defense this season, and he has taken to it, though the Sixers are still working out some kinks behind him when the big guy gets up into the face of an opposing ballhandler.

Base defense isn't really a problem for Philadelphia — they sit fourth in the league in defensive efficiency in spite of COVID issues and injury problems that have bounced guys in and out of the lineup. The trick now, Rivers says, is guys making the correct reads and being in sync with one another, knowing when to call a certain type of coverage instinctively.

It's a battle on multiple fronts. Philadelphia needs to know when to ICE a pick-and-roll vs. when to sit in drop coverage, but they also need to be able to communicate it effectively in the heat of the moment. Possessing the knowledge of when to call a certain defense isn't useful if your teammates aren't on the same page, and vice versa.

"We know our defensive coverages well, we just don’t know when to call them," Rivers said Tuesday. "Communication is the whole key. If you call it late, it’s too late."

Weirdly enough, the constraints of the COVID-impacted season have actually benefitted Philadelphia, at least for brief moments in time. Riding a zone defense to victory in a dramatic win over the Pacers on Sunday, Rivers noted that without a full arena of fans, it was easier to make calls from the bench and organize the team in a defensive structure they had only worked on for about five minutes at a shootaround. Teams with holdover styles and rosters should theoretically have an advantage in many scenarios, but every team is still working within the same strange setup, and some have adapted more easily.

In Rivers, the Sixers have a head coach who is earning rave reviews for the work he has done to keep them at the front of the pack in spite of these challenges. He was rewarded with the Eastern Conference Coach of the Month award for the start of the season in December and January, and dating back to training camp the group has taken to his leadership. His superstar is having an MVP-level start to the season, and role players respect how he has demanded a lot from his guys without turning into a dictator.

"I think he holds everybody accountable," Seth Curry said Tuesday. "He gives us a good balance of giving us freedom on the floor and holding us accountable for our play on both ends of the floor. Everybody’s shaping into their roles and we’re learning what it takes to win on a nightly basis, it’s been a lot of fun to start the season."

Will those good vibes last if and when this team hits a skid? That remains to be seen. But being able to jump out to a hot start has bought them a cushion for when adversity hits, and they are keeping their eye on what matters over the long-term.

• Joel Embiid was a go for practice on Tuesday, an encouraging sign after he sat out of Sunday's clash with the Pacers, but Rivers stressed (correctly) that his response to a day of practice was more important than practice itself. Fighting off back tightness, Embiid's availability will ultimately be determined by how he feels when he wakes up on Wednesday, staring down the possibility of playing three games in four nights between now and Saturday.

The news was worse for Mike Scott, who has been fighting a knee issue and appears to have taken a step back during a workout on a team off-day on Monday.

"I would categorize that as a setback," Rivers said Tuesday. "He was working out yesterday, got tangled up with someone and tweaked his knee again. [It's] not to where it was at. So that was the only bad news so far."

Rivers has been vocal about how Scott's absence has impacted the rotation, with Ben Simmons and Tobias Harris forced to play additional minutes with bench units in order to soak up the minutes vacated by Scott. While the head coach did not give an indication of the severity of the setback or a timeline for Scott's return, this lingering problem might need to be addressed at some point in the near future, lest they overextend players who they need to keep in good health over the long haul. A hybrid 4/5 who can shoot would be a big get for this group.