Joel Embiid's 59-point performance was a game for the ages 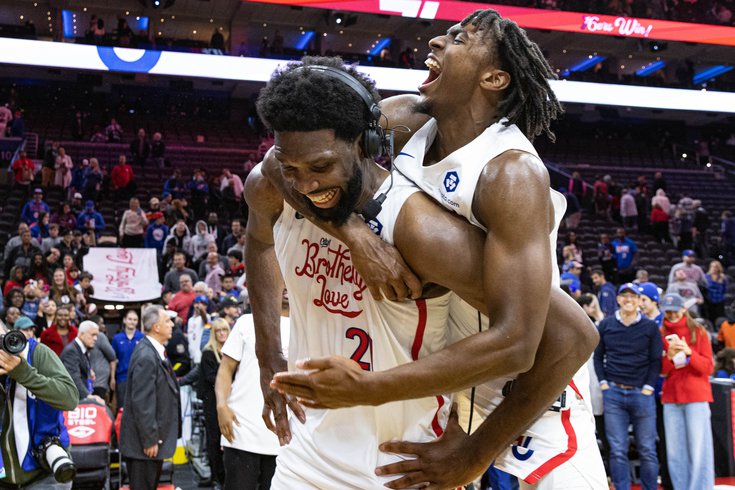 Joel Embiids performance Sunday was his best game ever.

When you are watching a basketball game from the sideline because you are too small, too untalented, too old, or too unmotivated to carve a path to NBA minutes, it can be hard to find the words to describe hoops greatness unfolding in front of you. Few men walking this earth, to say nothing of the men and women watching in the stands and at home, can properly contextualize Joel Embiid scoring 59 points and nearly turning that into a 59-point quadruple-double.

What do you say if you're Tyrese Maxey, a rising basketball star and eager sidekick to Embiid, someone who is sharing in his experiences but also capable of delivering a haymaker or two of his own on the hardwood? You are as powerless as the rest of us to try to sum up the madness of this Sunday night classic.

"Joel Embiid is very good at basketball, there's nothing else I can really say about it," Maxey said with a laugh on Sunday.

What do you say if you're Doc Rivers, a man who has had a seat next to greatness for most of your basketball life? You have thrown lobs to Dominique Wilkins, learned from Pat Riley, coached Tracy McGrady and Kevin Garnett and Ray Allen and Chris Paul and Paul Pierce and Kawhi...well, you get the point. You've been around the game all of your life. You've even watched as a teammate, David Robinson, accept an MVP trophy before getting his ass kicked up and down the floor by the man Embiid has so often been compared to, Hakeem Olajuwon. And yet...

What do you say if you're Matisse Thybulle, the only useful defender it feels like Embiid has next to him for most of the game, trying your best to aid him as he turns away driver after driver in the guts of the game? Maybe it's the texts from your friends that do the job for you, people coming from all corners of your life to ask you about the guy you have somehow managed to share time with on your basketball journey.

"They're like, 'It's like a [NBA 2k] stat line.' It's not one of those things that you see in a real basketball game," Thybulle said. "It's like when you pick one player in 2k and you just do everything with them."

What do you say if you are Embiid, on a floor you'll quip after the game is darker than the shade you'd like to play on, watching a defense melt away under your flamethrower? Do you bark at your teammates in the huddle, wondering why they have not offered you more? You have offered 42 points and 40 minutes of basketball to win a game the previous night, and your supporting cast is toothless, missing open shots in their best moments and throwing basketballs away in their worst moments. You have earned the right to do just about whatever you want on this night. And yet...

"Jo don't say nothin'. Just calling the play he wanted, that was it," PJ Tucker said Sunday. "They're all for him anyway. It's just, which one do you want to run?"

Here's what this performance was, what this game ultimately means — having Embiid is often enough. Enough to win a game against a 10-win Utah team that outexecutes, outworks, and outplays unprepared opponents. Enough to carry a Sixers team that shoots 21-for-55 from the field if you remove his contributions, 3-for-18 on the gaggle of open threes he was able to create for them. Enough to go 3-1 since he returned from the lineup, restoring a glimmer of hope in a fanbase that is filled with rage for this team, sputtering again in spite of lofty expectations and new additions. Somehow, the Sixers now own the fifth-best defense in the NBA, Embiid's return pulling Philadelphia from the basement to the penthouse.

"We kind of settled on what we're trying to do," Embiid notes on the defensive improvements. "I think at the beginning, we were trying to, we went away from what worked in the past especially with me on the floor. Switching everything, I can do it, but that's not my best attribute. I can guard guards and chase them all over the place, but I'm 6'10", so I should be in the paint blocking shots, protecting the rim. That's what I'm good at, so that's what we've been doing lately, making sure we keep our coverages."

Maybe the defensive effort is the headline, rather than the career-high 59 points. He is undoubtedly proud of nearly coming up with 60 points, even if he laughs that he actually has company in the 50-point club on this Sunday evening thanks to a scorcher from Cleveland's Darius Garland. But he and his teammates rally harder behind the idea that they are figuring things out on the other end of the floor. It's what Maxey says makes him the proudest of Embiid, that he found it within himself to score 26 of the team's 27 fourth-quarter points while also offering the most hellacious rim protection we have seen from him at any point in his career. The Jazz challenge him, and he rises repeatedly, at times stunned by their audacity to test him.

The stats and comparisons roll in. You, Joel Embiid, are in uncharted territory as far as recorded statistics go. No one has matched your performance since the blocked shot has been tracked. You've fallen a point and a couple of assists shy of the second 60-point triple-double in the history of the NBA, the first served up by none other than James Harden, maestro of Morey's Rockets in 2018. The man you nearly equaled watches from the sideline in a fuzzy green coat and metallic green shoes, and he declares after the game that you are a true original, something we've never seen before and likely won't see after your playing days are done.

You are different, undoubtedly. You are mercurial, a man who has publicly sworn off trash talk only to chide Lauri Markannen at the free-throw line while he's 57 points into his all-time performance, joking that his son needs to be put to sleep. You are both deferential and prideful, a player who sometimes needs to be reminded to share the ball but a teammate who spends most of his 59-point podium moment crediting his teammates for making him better, for providing him a platform to reach these heights. Your unselfishness rarely goes unnoticed, and your teammates make sure to mention it on your best-ever night on the job.

"He made certain passes out of triple teams and double teams, and we missed some shots as we do, but he trusted us," Maxey said Sunday. "He threw one to me I missed, I think he threw one to House that was big, and then that keeps the defense honest. So now it's like ah, he may pass or he may not, and now he's got a chance to go one-on-one."

This game is a testament to the work you've put in over the years, all of the weapons on display at once. You hit jumper after jumper over outstretched arms, whether baseline, foul line, or out of line at the point of release. You sprinkle in loping Euro steps, defenders hanging off of you as you deposit two by the rim. Free throws pile up as Utah's inability to defend you straight up becomes clearer, and when the Jazz attempt to double you, you either swing the ball or draw another foul, protecting the ball as arms come flailing in. Five first-half turnovers are the end of your errors, the second-half goose egg in that category standing out as your favorite statistic on a night where you obliterated the box score.

Perhaps most importantly, you make sure your team does not drop this game. Through 14 Sixers games, this team has already produced half a season's worth of angst, each loss drawing calls to fire the coach and each win shrugged off by some fans as delaying that desired execution. These Sixers are undoubtedly behind schedule, lagging behind the dominant pace many expected them to set. It's why this game against the Jazz feels like it has real stakes, against all odds. And perhaps this is why you play in this game in the first place, nursing various bumps and bruises but representing your team's only real hope to beat teams with any talent. Your team gives back a lead during the only minute you sit during the fourth quarter, and you slam the door shut in crunch time anyway, beating back any pertinent questions about backup centers and rotations for at least a few days.

Only you are capable of doing that for this team. There are capable running mates, even a future Hall of Famer and former MVP waiting to get healthy and rejoin you on the floor. But only you can stand tall and simply decide that your team is not going to lose this game, controlling both sides of the floor as if you are another foot taller and unburdened by the concept of fatigue. In these moments, perhaps you understand why the bar is set so much higher for you than the rest of the people around you, why averaging 27 points per game early in the season was not enough to quell criticism. People have been waiting for you to be the player you have become these past few years, not the young man you were before fatherhood changed your perspective on life.

But what really stands out, in the moments after you have authored one of the greatest individual performances in the history of basketball, eight years after you contemplated quitting the sport in the wake of losing your brother, is that you still find time to count the missed chances that would have pushed you even further into untouchable territory. The block opportunities where 50/50 foul calls didn't go your way still eat at you as you discuss the game with both feet in ice buckets after the win. You reflect on a three-point attempt that would have given you 60 points, and you offer a smile as you tell the assembled press a better look at history was there if you wanted it.

"I made it harder than it should have been, I could have easily dribbled the ball and pulled up, but I guess I was feeling myself," Embiid said Sunday.

And that is why, on dreary Sunday nights in mid-November, we show up to watch your team play basketball — because you are the only person capable of stopping you if your body and mind are fully committed to your goal. The rest of us cannot say what it feels like to score 59 points and destroy the concept of what a big man should look like. But we know what greatness looks like when we see it, and it's why we continue to demand it from you.