Eytan Shander: The Sixers continue to be underachievers 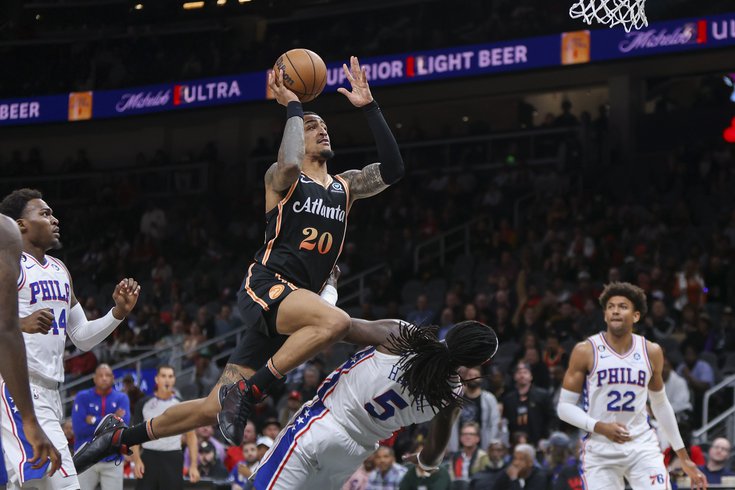 Hawks forward John Collins attacks the Sixers in the paint.

Yep. This is pretty much what the Philadelphia 76ers are right now and most likely what they will be throughout the regular season. Underachievers.

I guess the season starts now or something because a team with actual championship aspirations finished their run. I have no idea what the goal is for the Sixers, but they should start with not being embarrassed more often than not. It’s happening often enough to at least warrant concern.

Injuries. That’s usually what you will hear about this team and why progress is always halted. But it’s the guys who are present that are slipping – in some cases disappearing. From the starting rotation – no matter who is in or out – to a bench with so much high hopes to begin the season, it’s just not a good product.

Oh, I know. You are scouring the standings right now hoping to find an example of another slow start just to shut me up. I’ll do the work for you. The easiest possible example I can find of a team that is currently starting slow with zero concern is the Golden State Warriors. They have earned it.

Get out of the second round and you too can earn it. Maybe. But at least start there.

This team isn’t that fun to watch. They are kind of boring, in fact, outside of the obvious 20+ you get from Embiid. Tyrese Maxey has grown to be my favorite player in the NBA and it’s a damn shame how the team is basically forcing regression on him. The Sixers coach even mentioned it how Maxey is struggling with turning into James Harden as a passer.

He’s not James Harden as a passer but could be as a slasher, instead this team was rushed together to appease a guy who isn’t even playing right now. That’s causing growing pains with the current guys like Embiid and Maxey. Free Tyrese Maxey.

I don’t think you should give up on the Sixers season as a whole, but you have to understand the nature of the landscape here. There are no Philadelphia Phillies in the NBA, teams that shouldn’t be in the Eastern Conference Finals or NBA Finals. You have mismatches, sure, but no team four games above .500 is going to rally from the play-in game to eventually hoist the trophy.

Unfortunately, you have plenty of people – with platforms, mind you – who will refuse to acknowledge the NBA is not open for long shots. Keeping that “Phillies energy” or whatever it will be dubbed on Twitter – did you pay your $8 yet? There will be mass conversations by misinformed people who follow the sport through “Worst Take” or “Undecided” and tell themselves the Sixers have a shot.

Let me be the first person to tell you that without a healthy team – something that has alluded this squad for years in the postseason – this team is out in the second round at best. Even with a healthy team, this squad will struggle to clear their early season issues, making seeding a more difficult matter. Go ahead and look around the East right now, you will match Embiid with other stars, and most likely tell yourself that the Sixers are as good or better than any of them.

There was a Bucks game the other night where Giannis Antetokounmpo took the night off. Brook Lopez had an interesting point after their win about how guys who normally play with Giannis figured out the spacing and how to win without him. It was a valuable lesson.

The Sixers don’t work that way. They refuse to attack the three-point line with some archaic approach that would even make Chris Russo scream, “SHOOT IT!” We see bench guys come alive and keep them in a game, but if the Sixers are relying on 25 from Georges Niang in a playoff game – it’s already over. Now, credit to Niang for being a part of a cohesive bench that should be playing better, overall, it’s just he plays in such a top-heavy, starter-focused game.

That "season starts now" thing got me. This is a team that’s never been out of the second round with Joel Embiid, yet the attitude is that they can turn on some switch whenever they want. I decided not to listen to it last year, but I do think there maybe something to Embiid putting so much into winning the MVP that it gassed him and hurt the team. Maybe he’s not as interested this year because he felt he gave it all, maybe he’s still hurt. The team just doesn’t look sharp and for one with their history, combined with Harden’s history, I’m not sure where this level of confidence comes from.

It's disappointing because of the high hopes and promise with this team before the start of the season. Injuries aren’t an excuse but they sure as hell make it tough to battle out of any ruts. The worst part about it is no change will do anything to ignite this team. They are going to win a bunch of games and look awful when they lose. They will fight for the fifth seed and most likely finish no higher than fourth and no lower than sixth This is what people call NBA playoff mediocrity.

It's what the Utah Jazz traded out of to find a different pathway. I know we need a lot of this season to play out before making this proclamation, but the season comes with recent history attached. Let the change happen in the offseason mainly because they are locked in to so much now. Players are locked in, new guys are locked in, and they haven’t traded Tobias Harris – nor will they. So what exactly do you think is going to change this year?

Again, the Sixers are a great regular season team – when they want to be. They have nothing to stand on to tell me or you or anyone else, “Just wait until the playoffs…”