Former Philly weather presenter's tale of drugged exploitation the focus of an hour-long CNBC program. Here's what you missed. 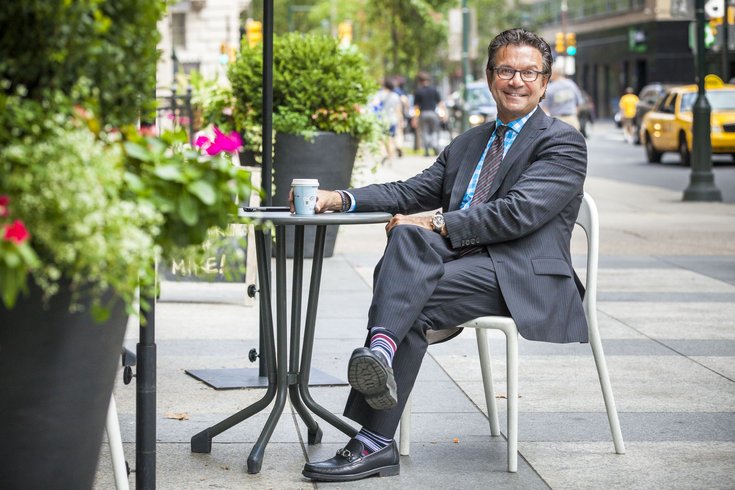 John Bolaris has a coffee at Rittenhouse Square.

CNBC airs a program called “American Greed” in which actor Stacy Keach “narrates this dissection of the dark side of the American Dream.”

I’d not seen it before Thursday, but when word gets out that weather presenter John Bolaris was going to appear in an episode, it instantly rose to must-watch status.

Bolaris, a one-time PhillyVoice contributor who really needs no introduction, was on the program to discuss his victimization by twice being drugged and duped by Eastern European “bar girls” in Miami Beach in 2010.

“John insists that the women never offered to have sex. On the other hand, he was open to whatever the night might bring.” —Stacy Keach, narrator, "American Greed"

We needn’t really rehash the particulars of a story you probably well know by now. Suffice it to say, David Gambacorta’s 2011 piece in the Daily News remains the seminal work on a topic that saw the lothario-esque local celeb become a key witness in the federal case against the Bar Girls’ empire.

The tagline for "The Bar Girls Trap” episode reads as such: “Russian gangsters use beautiful women to seduce amorous men in nightclubs out of their money and jewelry.”

We’ll let J-Bo, and some awesome dramatic re-enactments with equally awesome narration, take it from here.

Just 14 seconds into the 43-minute episode, Bolaris mentions how his flirtatious victimizers — “the one was taller, more sophisticated; the other one was more cutesy, girl-next-door” — engaged him in a guessing game: Match our accents to our homeland.

“They compliment you. You’re very, very nice. You’re a nice American. I said, ‘Oh thanks,’” recounts Bolaris, with a knowing eye roll to the cameras. “They exceeded the ‘greed limit.’ Forget about Gekko ‘greed is good.' Greed is not so good. Eventually, you’ll get nailed!”

“Miami is an adult playground, a place where the normal rules of society don’t always apply” notes narrator Keach as a down-bikini beach shot enters the frame. “Here’s the thing about Bolaris: Everywhere he goes, he’s mobbed by fans. …

“Some Philadelphians on Spring Break see him and say, ‘Hey John, what’s the weather gonna be?' The bartender is also from Philly. Two women at the side of the bar take note of this banter.”

Bolaris then explains that they then came over and asked him if he was a “weather presenter in this country.” He wasn’t all that keen on the label, but the bartender confirmed their suspicions.

The weather presenter ordered a round of pinot grigio, talked about how nice he was (as he is wont to be) and moved the party to the poolside bar.

“John insists that the women never offered to have sex. On the other hand, he was open to whatever the night might bring,” said Keach in a bow-chicka-bow-bow tone of his own.

Bolaris is asked to join the ladies in a round of shots. He says he did not want to do a shot because, laughingly, “I’m drinkin’ pinot grigio. I’m not linin’ up for a shot!”

Persistence paid off. They came back seductively and poured a shot down his throat. (Alas, he didn’t use the money quote “do shot” in this instance.)

“There’s not much that goes on after that that I can truly remember,” he recalled of a prelude to an evening that involved an “art auction” benefitting the victims of the Haitian earthquake and his arm being held to sign things.

“Before the raid, I said to one of the feds, I said, ‘Can you do me a favor? When you go in, tell Marina that the weatherman says hello.’ Because they bragged about what they did to me. They got greedy.” —John Bolaris

In a dramatic re-enactment, Bolaris is shown waking up all hung over, fumbling for his glasses, seeking a receipt for the painting which could become a charity tax write-off, showering, pouring a bunch of Advil into his hand, dropping an Alka-Seltzer in a wine glass of water, noticing his “expensive sunglasses” were missing and contemplating his lot in life.
“After waking up with a throbbing head and a mysterious painting at the foot of his bed, John Bolaris is a little confused,” said Keach, ceding the mic for Bolaris to explain the confusion of his wallet still being full and the subsequent voicemail from the lady saying they had his sunglasses.

That’s why he ended up going out with them AGAIN, meeting at that same "do shot" pool bar. The dramatic re-enactment has the ladies pawing at Bolaris like a piece of meat. When he got up to use the powder room, he thinks they drugged his pinot.

Another blackout, and the painting is gone!

The next day, he flies back to Philly. American Express calls saying there was a “boatload of suspicious charges” accrued to the tune of $27K, which was then updated to $43,670 from a place called The Caviar Bar. He didn’t recognize the name, but he pinned it on the B Girls, so he called them.

The show then shifts to Det. John Bolaris cracking the code of exorbitant-charge frequency and the reality that if he drank all those bottles so quickly, “I’d be dead.”

"It took a lot of courage for Bolaris to come forward. He knew what people were going to say about him, that he was going to be ridiculed, and my hat goes off to him." —Luis King, detective (ret.), Miami Beach Police

Enter Miami Beach Police Det. Luis King who moonlights as nightclub security, who went undercover at the FBI’s behest in Operation Caviar Beach to bust fraud at the clubs with an eye toward ties to the area’s “Little Moscow.”

He gets a “front row seat to the wildest show in South Beach,” that being Bolaris’s “B Girls” grinding on, tempting and victimizing gentlemen much like the weather presenter got got.

This portion of the program — while important to the criminal investigation underlying the overall story — is less interesting, as it doesn’t feature Bolaris in real or dramatic-reenactment form.

(Though it does include the fact that one of the J Bo ladies was Marina Turcina, the 24-year-old Latvian B Girls “captain,” who per King, “knew how to bring out the party animal in pretty much all the guys.” The other B Girl was Lt. Anna Kilimatova, 25.)

What follows are sexy shots of B Girls dolling themselves up for the criminal night that lay ahead on, and near, Ocean Drive.

“The B Girls hunt in packs of two,” said Keach, “and they have a keen sense of when to pounce.”

As King explains their M.O. — high-end shoes = really rich mark; they love to stroke a man’s ego — they splice J Bo back into the mix goofily admitting to having done a shot. The men got vodka; the B Girls, water.

Adds Playboy writer Pat Jordan, who covered the case, “They’re looking for a guy who thinks he’s a player. They’re like a ‘Playboy’ cartoon: Two gorgeous women going up to some nerdy guy in glasses at a bar saying he’s the hottest thing they’ve ever seen. A real player would know right off.”

Oh snap, that dude just called out Bolaris as the type of guy who thinks he’s a player but isn’t. That ain’t nice at all, and Keach just let it slide. Hurtful to do that to a guy who poured his heart out for a CNBC show, yo.

Lo and behold, King said that Marina told him all about the “guy out of Philadelphia, some TV guy” who she took for $48,000 and sold him a picture we had on the wall.”

The joke’s on them, though!

They thought the weather presenter was an easy mark.

They thought he would just go away.

But no! He was not, and he would not.

Ok, fine. King ingratiating himself into the Russian crime syndicate circle while undercover did a whole lot more of that, but Bolaris certainly played a role, too.

Upon hearing that the B Girl Crew was about to get raided, Bolaris sent a message:

“Before the raid, I said to one of the feds, I said, ‘Can you do me a favor? When you go in, tell Marina that the weatherman says hello.’ Because they bragged about what they did to me. They got greedy.”

The ear-to-ear grin on J Bo’s face when he shares that with the cameras is one of heartwarming redemption, until the documentary shifts into judgment of a Philadelphia media that “went nuts with the story,” treating J Bo as a lecherous novelty act instead of the crime victim he was.

The Playboy article led his boss to call him an embarrassment.

“John, when you decide to go to Miami and not be with your little girl and hang out with Russian hookers, what do you think we’re going to do?” he recounts being told by a network exec. “He goes: ‘It’s all perception.’ And that was it.”

They cut away to Bolaris walking alone on a dark street (looked to me like the 1600 block of Sansom, but I could be wrong).

“Bolaris says his lost weekend ultimately cost him $2 million in lost wages and he believes he’s been blackballed,” said Keach.

Bolaris concurred. He said “it’s over,” that he won’t be able to get back into the TV industry. :(

The Playboy writer then likens him to an eyewitness in a murder case who risks safety to testify. Then, the undercover cop who took down the B Girls offered his take to close things out.

"If it wasn't for Bolaris being, actually, pretty tough and insistent, they would still be operating," King said. "It took a lot of courage for Bolaris to come forward. He knew what people were going to say about him, that he was going to be ridiculed, and my hat goes off to him."