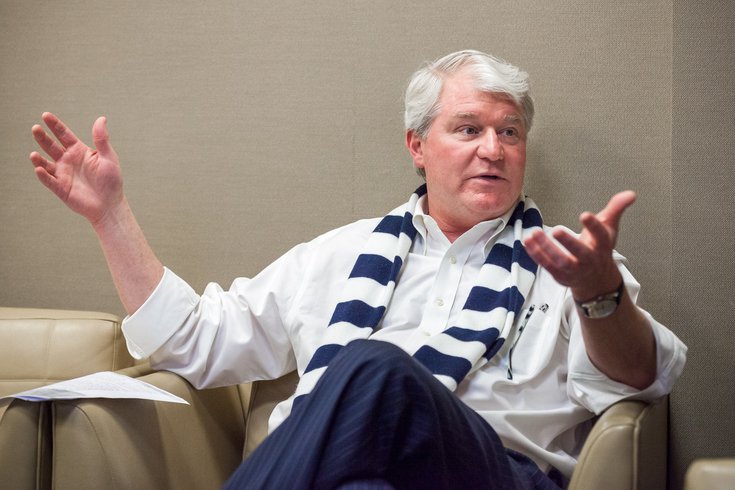 Local union leader Johnny Dougherty and his nephew Gregory Fiocca were both charged for conspiracy and allegedly extorting a contractor.

Union leader John Dougherty was arrested by federal agents on Wednesday after being indicted on multiple counts of extortion for allegedly threatening a contractor that had employed his nephew.

"Johnny Doc," business manager of the International Brotherhood of Electrical Workers Local 98, and his nephew, Gregory Fiocca, both have since been charged by the U.S. Attorney's Office in Philadelphia. Dougherty, 60, is charged 18 counts of extortion and one count of conspiracy. Fiocca, 28, faces the same charges.

The alleged problems between Fiocca and his employer escalated in August 2020 when Fiocca confronted the contractor about being paid for fewer than 40 hours the previous week. Federal prosecutors say Fiocca's paycheck reflected that the defendant hadn't been showing up for work, but the defendant demanded to be paid. He allegedly threaten his boss, grabbed him by the throat and threw him on a desk, investigators said.

Dougherty allegedly followed up the confrontation and threatened to ruin the contractor's business by pulling all his IBEW electricians from the job and preventing the company from getting future work.

Since their arrests Wednesday morning, Dougherty and Fiocca have been released from custody, pending their trials, NBC10 reported.

Frank Keel, the union leader's spokesperson, confirmed that Dougherty had been arrested "in the early morning hours" at his home. The statement released by Keel claimed the feds have targeted Dougherty since the day he became IBEW business manager in 1993.

"This isn't a prosecution, it's a persecution," the statement said.

This is the second federal case against Dougherty. He is scheduled to go to trial later this year on embezzlement charges from 2019 – along with other union-member codefendants and Democratic City Councilman Bobby Hennan. Prosecutors in that case accuse Dougherty of falsifying financial documents to make personal expenses – like home improvements, sporting events, concerts, expensive meals – appear to be union related. Dougherty also allegedly used paid Henon a $70,000 IBEW salary, which the feds claim was in exchange for the councilman serving the union's interests in city government.

The latest court documents spell out the the threats Fiocca made against the contractor, who authorities only identified as "R.P.," stating that the defendant allegedly threatened to break his boss' jaw and said "you check on me again, I'll break your face in the parking garage."

After Dougherty allegedly interceded on his nephew's behalf, Fiocca stayed employed by the company until January, but according to the U.S. Attorney's Office did little or no work.

No one should fear consequences, either economic or threats of physical violence, for doing honest business in Philadelphia, said Jennifer Arbittier Williams, acting U.S. Attorney for the Eastern District of Pennsylvania said.

"... Fiocca took advantage of his uncle’s position as a powerful leader of an influential union, assaulted a co-worker, and enriched himself at the expense of his employer – and Dougherty had his nephew’s back through all of it," Williams said in a statement Wednesday. "These kinds of actions do not represent 'business as usual,' and will not be tolerated in this District."

Keel said Dougherty had just returned home when he was arrested, after spending 12 days at Thomas Jefferson University Hospital, where his wife was being treated for a serious illness.