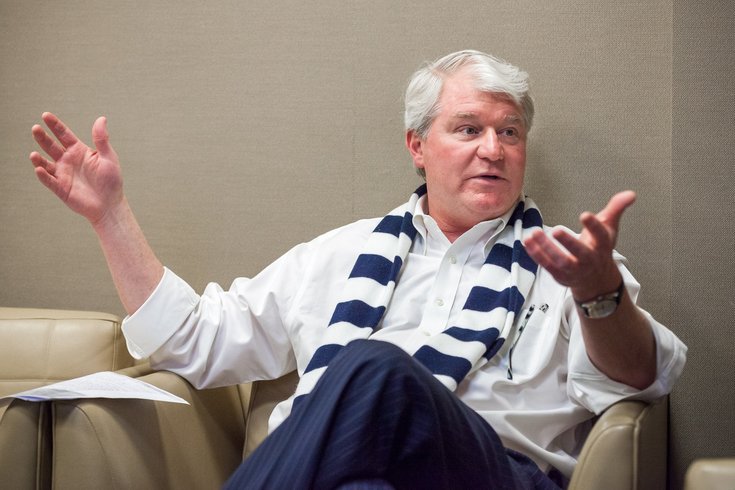 Dougherty, the business manager of the International Brotherhood of Electrical Workers Local 98, is accused of conspiring with fellow union members to embezzle union funds for personal uses. They then allegedly falsified financial documents to make the expenses appear union-related, federal authorities charged.

Additionally, Dougherty allegedly paid Henon a union salary in excess of $70,000 annually to use his position on council to serve Dougherty's interests.

First Assistant U.S. Attorney Jennifer Arbittier Williams announced the charges at a press conference Wednesday morning. If convicted of all charges, Williams said the defendants face "decades" in prison. The sprawling indictment of 153 pages includes 116 counts, including 91 against Dougherty.

Dougherty and Henon have both long denied any wrongdoing.

Frank Keel, a spokesman for Dougherty, released a statement saying the union leader has devoted "all of his energies to Local 98," adding that his "every move" was made to improve the lives of union members.

"To allege that John in any way attempted to defraud the union he cares about so deeply is preposterous," the statement concluded. "He looks forward to his day in court and the opportunity to clear his name."

Henon, who was first elected to council in 2011 to represent the 6th District, posted a denial to his social media accounts, saying that he will continue to serve on council as he seeks to clear his name.

Dougherty, 58, of Philadelphia, known as "Johnny Doc," has served as Local 98's business manager since 1993. During his tenure, Local 98 has become the most prominent union in the city and one of the biggest campaign contributors in the state.

The indictment came nearly 2 and a half years after the FBI raided Local 98's business office, Dougherty's South Philly home and Henon's office. It covers alleged activites that occurred between 2010 and 2016.

Federal authorities allege Henon, 50, of Philadelphia, accepted a union salary and other benefits to carry out Dougherty's personal, professional and financial agendas.

The indictment also claims Henon threatened other union leaders and tried to halt the Children's Hospital of Philadelphia from using nonunion labor to install MRI machines – again at Dougherty's orders.

In another alleged instance, Dougherty sought revenge against a towing company that attempted to tow his car, the indictment states. Again allegedly on Dougherty's command, Henon drafted a resolution to investigate the company's operations, prosecutors said.

"In essence, the indictment alleges that Henon abdicated his duty to provide honest services to the citizens of Philadelphia because he made decisions on behalf of John Dougherty – rather than the people that elected him to city council," Williams said.

Attorneys for four of those defendants – Neill, Crawford, Rodriguez and Massa – maintained their clients' innocence. Attorneys representing Burrows and Fiocca did not immediately respond to requests for comment.

The indictment alleges that Dougherty and his co-defendants spent more than $600,000 on home improvements, sporting events, concerts, expensive meals, food, and other personal items.

In October 2015, Dougherty allegedly offered a family member a membership to the Sporting Club at the Bellevue in Center City, according to the indictment.

"I got a different world than most people ever exist in," Dougherty allegedly said. "I am able to take care of a lot of people all the time."

In another case, Dougherty, Burrows and Neill each allegedly used Local 98 dollars to pay for construction and repair projects on their own homes, Williams said. Massa then allegedly made it look as if the work was completed on Local 98 properties.

Dougherty also allegedly placed family members on the union's payroll while they were on vacation, enrolled in school or otherwise not working for the union, Williams said.

"The bottom line is that this indictment alleges John Dougherty and his co-defendants used Local 98 funds as their own, paying for their personal travel, meals, shopping, parties, home improvements and much more – ultimately costing the union and its hard working members over $600,000," Williams said.

Mayor Jim Kenney issued a statement saying he was "deeply disappointed" to learn of the charges against Dougherty, Henon and the Local 98 officials.

"I have known these individuals to be passionate and hardworking people, which is why I find these allegations so disturbing," Kenney said.

Kenney added that "it's extremely important that elected officials diligently guard the public's trust," but did not call for Henon to resign from his elected post.

"Whatever the councilman decides to do next regarding his council position, I hope he considers the impact these proceedings have on his ability to serve the residents of the Sixth Councilmanic District who elected him to office," Kenney said.

Kenney was elected mayor in 2015 with the support of Dougherty.

Though the investigation remains ongoing, Williams declined to say whether Kenney – or any other public official – was under federal investigation.

"I can certainly not comment on any aspects of this investigation that are not public," Williams said. "Mayor Kenney is not a defendant and he is not named anywhere in this indictment."

Jane Roh, the communications director for Council President Darrell Clarke, did not immediately respond to a request for comment.