Philly approves plan to bring fans back to sports venues 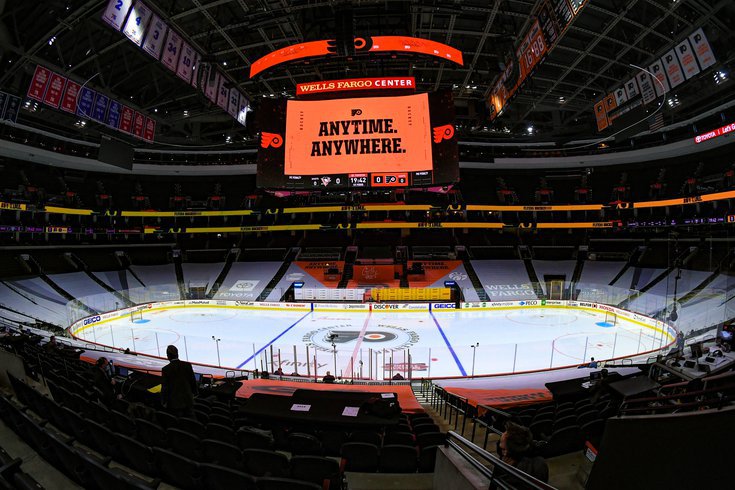 The Wells Fargo Center and Citizens Bank Park will be permitted to welcome back fans after the city brought its venue occupancy limits in line with new guidelines introduced by Pennsylvania this week.

Philadelphia officials confirmed Tuesday that the city will align with Pennsylvania's revised guidance on occupancy limits at indoor and outdoor venues, which will allow fans to return to Wells Fargo Center and Citizens Bank Park for Sixers, Flyers and Phillies games.

The Wells Fargo Center will welcome back fans for the first time on March 7, when the Flyers take on the Washington Capitals at home. The Sixers' first home game after the NBA All-Star break is Sunday, March 14, against the San Antonio Spurs.

We're back. You're back.

We'll see you on Broad Street for @NHLFlyers and @Sixers games beginning on Sunday, March 7th.

Approximately 3,100 fans will be permitted to attend each game at the arena. With no attendance restrictions, the Wells Fargo Center's capacity is 21,000 people.

Fans will be required to wear a mask at all times, complete a health assessment questionnaire and follow social distancing rules.

"We've been working around the clock to ensure that we can safely welcome Flyers and 76ers fans back to Wells Fargo Center, and we're thrilled to open our doors to Philly sports fans once again," said Valerie Camillo, president of business operations for the Wells Fargo Center. "This is a big deal for our building and our teams, but it's also an important step for our local economy. Every time the Flyers and 76ers play at home, we'll have hundreds of part-time employees back on the job and dozens of local businesses will benefit, too, so this is a win for our entire city."

Tickets to Flyers games will be prioritized for "Inside Edge" season ticket members. Others who are interested can fill out this form to be put on a wait list.

Information about obtaining tickets to Sixers games can be accessed at the team's website.

At Citizens Bank Park, 8,800 fans will be allowed to attend home games when the season begins April 1 against the Atlanta Braves. The ballpark's maximum capacity is 42,972.

Fans will be seated in pods of two, three or four people, with limited pods available for five or six people.

All attendees age two years and older must wear a face covering over their nose and mouth at all times on ballpark property, other than when actively eating or drinking at their ticketed seats.

"We have been diligently working with our city and state officials to finalize health and safety protocols at Citizens Bank Park," said Phillies executive vice president David Buck. "With these important measures now in place, we are excited to safely welcome a limited number of our fans back to the ballpark experience. The unmatched energy our fans bring to the game has undoubtedly been missed, and we can't wait to hear their cheers once again come Opening Day."

Tickets to attend the Phillies' first 19 regular season home games at Citizens Bank Park will be offered initially to season ticket holders. The public also will have the chance to purchase tickets beginning on Friday, March 12. All tickets will be mobile and available only online at the team's website.

After that, tickets for the Phillies' remaining 62 home games will go on sale in early April.

COVID-19 cases could be on the rise again

Despite the encouraging news about sports venues, Dr. Farley cautioned that the city has seen a slight increase in cases over the past week, which has also been observed in surrounding parts of the region.

"The increasing number of cases in the region are absolutely a reason to be concerned," Farley said. "This epidemic isn't finished yet. It has surprised in the past and it likley will again."

"I'm concerned that the previous decline that we've been seeing may be stalling," Farley said. "In part, that's just in looking at these numbers. In part, it's also because I'm seeing that case counts have been rising in the past week in New York, New Jersey and Delaware."

Eleven new fatalities in Philadelphia reported Tuesday raised the city's death toll to 3,102 since the start of the pandemic.

Farley said the reason for the increase in cases this week isn't clear, especially after a month of steadily declining case counts.

"We don't think we've vaccinated enough people to make the epidemic go away, so I'm concerned that what may be happening is that people are starting to get complacent," Farley said. "They may be less likely to use masks or more likely to get together with people indoors when they're not wearing masks. I'm worried that people are just tired of the epidemic and hoping that we're past it."

The city's vaccination effort continues to expand, most notably with the start of FEMA's mass clinic at the Pennsylvania Convention Center beginning Wednesday. The site aims to vaccinate up to 6,000 eligible people per day for at least the next six weeks.

As of Monday, Philadelphia providers have administered 210,000 first doses and 102,000 second doses of COVID-19 vaccines. At least 48,000 shots were given last week, a number that will likely be higher when all vaccinations are totaled.

Philadelphia also will be receiving its first shipment of the newly authorized Johnson & Johnson vaccine this week. Farley said the vaccine providers who will receive it have been advised to prioritize people who are either homebound, have limited mobility or are transient, as Johnson & Johnson's one-shot dose is best-suited for this population.

The health commissioner acknowledged that as vaccine supply expands, the question of distribution remains an ongoing challenge.

"We're still in a situation where the problem is more about how quickly we can deliver the vaccine than on how many doses we have," Farley said. "We're working to try to get existing providers to vaccinate more — that's hospitals, clinics, and community providers. And also have more providers, so that includes more pharmacies ... and the providers we hope to bring on board through our RFP process."

The health department will release an updated vaccine timeline on Wednesday outlining the city's current progress and hopes in the months ahead.

"If we're talking about a time horizon of a couple months, I think we can get to over 100,000 doses delivered per week," Farley said.

In the context of the city's easing of restrictions on sporting venues, Farley said he has remained in regular contact with the CDC about Philadelphia's mitigation efforts. The CDC warned this week about states rolling back restrictions too quickly amid plateauing cases.