The tool scans pharmacies' sites, gathering real-time data on available slots, and puts it all in one place for users 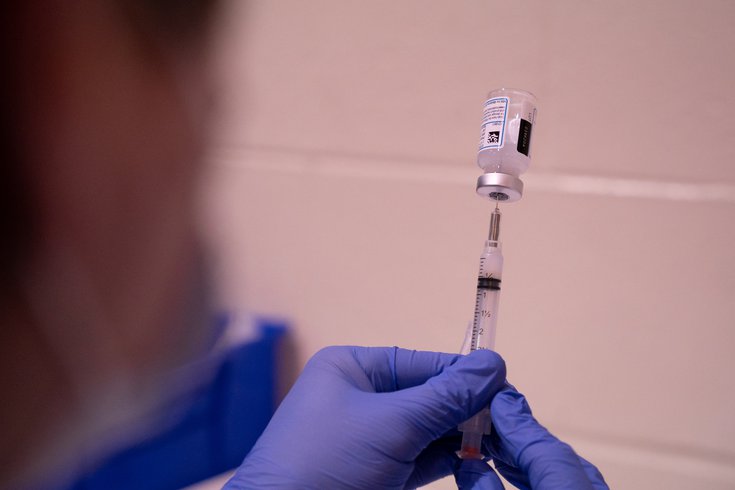 FindAShot.org is an online tool that provides live updates on pharmacy appointment slots for COVID-19 vaccinations, which the site's creator David Newall says will help users searching to get their shots. In the photo above, a health care worker at a vaccination site in New Jersey prepares a syringe with the Moderna vaccine.

In the early months of the enormous push for COVID-19 vaccination in the United States, nothing has been more frustrating for people eligible to receive the shots than finding and scheduling appointments.

Much of this headache is simply a function of limited supply and voracious demand intersecting with an untested distribution network that's been challenged to efficiently prioritize need, equity and logistics on the fly.

The other dilemma is that many states and vaccine providers don't have reliable registries to connect people with appointments in a timely manner. Even the CDC's new Vaccine Finder website only shows which pharmacies have vaccine shipments, rather than clue people into when those locations actually have appointments available to book.

At every turn, it's a race against demand to hit a moving target.

The process remains so finicky that volunteer "vaccine angels" across the country are doing the time-consuming work of tracking down appointments online for those who are eligible but lack the time and technology skills to get something firm on a calendar. Others have formed Facebook groups to offer technical tips and guidance on vaccine appointment scheduling.

These are the circumstances that inspired David Newell, a Wharton School Executive MBA candidate at Penn, to create FindAShot.org, a new website that scours pharmacies around the country for available vaccine appointments.

Newell, who doubles as a full-time data strategist for McAfee, became frustrated when trying to pin down appointments for his parents in late December. He noticed that he could identify pharmacy locations and store numbers in the region where supply was incoming, but he couldn't easily determine when each of these stores would have appointments available.

"I started developing a tool to go check them automatically, and that's what formed the foundation of FindAShot.org," said Newell, 32. "Each (pharmacy) brand kind of has their way of doing it, and if we can plug into it, we get nationwide coverage. From what I've noticed, no other site has brought together multiple pharmacy brands and gone nationwide."

The project's growth could be an invaluable resource to get vaccines into the arms of seniors, who are the target population for pharmacies at this stage of the rollout. The Federal Retail Pharmacy Partnership Program, for example, prioritizes the elderly in Philadelphia and in many parts of the country.

Using FindAShot is simple: Enter a ZIP code or state and the site generates a list of pharmacies with appointments, organized by location and how recently new appointment slots were added. From there, users can click a link to these pharmacies and have a solid leg up on scheduling an appointment with them.

FindAShot isn't a perfect science — it still relies on the appointment platforms each pharmacy chain uses — but Newell continues to fine-tune it. There is no guarantee that the listings on FindAShot will be timed exactly with remaining availability of appointments at a given pharmacy. Some brands have virtual waiting rooms, for example, that place users in a queue to meter the high demand.

But since FindAShot refreshes and regenerates its lists every few minutes, the site is always scanning 15,000 pharmacies across the country, offering a higher likelihood of success than randomly refreshing and checking store websites for updates. To make things easier, each listing on FindAShot is color-coded to indicate how fresh the new appointment slots are at a specific pharmacy location, allowing users to gauge where they should try their luck.

The real advantage of FindAShot is that it provides live appointment listings for multiple pharmacy brands on a single website and drills them down based on their proximity to a user, or whatever parameter the user selects.

Those helping family members in another city or state find the vaccine can execute searches near their relatives and help find appointments.

And since the site links out directly to pharmacy booking platforms, scheduling the first shot usually means that you'll be able to easily schedule the second shot at the same location, sometimes simultaneously, as in the case of CVS.

"From everything that I've seen, second dose logistics have been very easy," Newell said.

Anyone who uses FindAShot is responsible for verifying their vaccine eligibilities, and most pharmacy brands will screen out those who aren't eligible if they attempt to book an appointment.

Pennsylvania has four phases of eligibility for the vaccine, which are defined on the state's COVID-19 website, while Philadelphia has established slightly different eligibility requirements for city residents. New Jersey's requirements to receive the COVID-19 vaccine can be found on that state's website..

There have been some roadblocks preventing FindAShot from becoming a one-stop solution to booking vaccination appointments.

While some pharmacy chains integrate smoothly with Newell's platform — CVS and Rite-Aid tend to have reliable compatibilities with the site — others like Kroger's and Albertson's have blocked FindAShot, citing cybersecurity reasons and general "bot management," something large brands deploy to prevent the kind of automated buying sprees seen during the holidays for game consoles and popular toys.

Alberston's is the parent company of Acme, which is expected to begin offering the vaccine next week, however it's unlikely its appointment platform will be compatible with FindAShot.

Newell continues to seek solutions, and he hopes his site's growing popularity will put pressure on Kroger's and Albertson's to stop blocking FindAShot.

Since FindAShot launched on Jan. 6, it has gained modest traction among savvy users who happen to know the tool exists. The site doesn't collect any personal data and only monitors growth using web analytics software, so Newell said he can't directly determine how many successful appointments have been booked through his site.

The voluntary feedback Newell has gotten from his users has been positive, though. While FindAShot has no advertisements – Newell said his motivation is community service – users can make contributions to the effort using the "Buy Me a Coffee" button at the top of the website. Those who donate to the cause are able to leave feedback.

"At this point, I'm confident that there's been several dozen people that have found shots, and probably into the hundreds, I suspect," Newell said.

Pharmacies are just one of the ways to get a COVID-19 vaccine, but as supply catches up with demand and more people become eligible for shots, it's likely that pharmacies will become the primary mechanism for distribution.

The federal government expects that enough vaccine supply will be available by the summer to begin offering shots to the remaining public, older than 16, who have not yet been inoculated, especially as it is anticipated the FDA will authorize additional vaccines to supplement ones currently produced by Pfizer and Moderna.

When vaccine eligibility expands to the general population, the demand for pharmacy appointments likely will experience another surge that outpaces the ability to deploy the existing supply, even if it's substantially bigger. That's where FindAShot could prove handy at a later stage in the vaccination process this summer.

Eventually, the hope is that getting a COVID-19 shot at a pharmacy is as simple as getting a flu shot.

In the meantime, as vulnerable people across the United States search far and wide for vaccine appointments, FindAShot may help remove some of the stress, frustration and fear from the process.