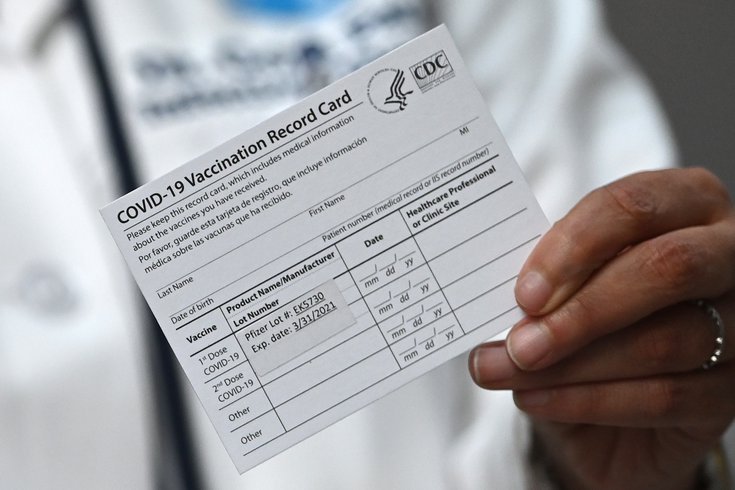 As Philadelphia's COVID-19 vaccine supply expands and the federal government promises more doses, the city health department says eligibility could open to everyone in June.

Philadelphia officials believe they now have a clearer picture of when the COVID-19 vaccine will be more broadly available to residents who are eager to receive it.

The city likely will remain in Phase 1B until the end of April, Health Commissioner Dr. Thomas Farley said Tuesday. That group covers front-line essential workers, seniors over age 75 and people with high-risk medical conditions.

Phase 1C will begin in May. That group includes other essential workers with lower risk of COVID-19 exposure, such as sanitation workers, construction workers, higher education employees and postal and package delivery workers.

Phase 2 — which opens eligibility to everyone over age 16 — will begin in June.

"We want to reach everyone who wants the vaccine by the end of July," Farley said.

That timeline is based upon the federal government's announcement last week that it had secured another 200 million doses of the Pfizer and Moderna vaccines. The U.S. now expects to receive 600 million doses by the end of July — enough to vaccinate 300 million people.

There is still a high degree of guesswork involved in the city's timeline, Farley stressed. It could be influenced by a range of factors, including the authorization of additional vaccines, how efficiently Pfizer and Moderna can fulfill their commitments and how quickly vaccine services can be scaled up to match the supply.

The city is gradually receiving increased doses of the two vaccines that are currently available.

Last week, the city and its providers delivered at least 44,000 total doses, based on currently available data. During the prior week, they delivered 35,668 doses.

As more vaccine supply arrives, the health department will need to observe demand among eligible groups to determine how much of a limiting factor the city's existing delivery channels may be.

"We don't know how many people amongst those eligible will choose to be vaccinated," Farley said. "It's entirely unclear how many people want this vaccine. We hope it's everybody. We're not sure, though."

Numbers provided by local health systems in Philadelphia suggest that many hospital workers have either opted not to get the vaccine at this time or have not yet scheduled an appointment for unknown reasons.

"What I'm hearing is that overall, about one in four or one in five people who were invited are coming in to be vaccinated," Farley said.

Hospitals also are beginning to provide their own mass clinics.

The city could not immediately provide data on how many people in the general population have expressed interest in receiving the vaccine by using the health department's official form. Invitations to eligible people who filled out the form just began in the past few days, Farley said.

Elsewhere, the city continues to expand vaccine availability at pharmacies for people over age 75 and through other mass clinics run by the health department and its partners.

"The Convention Center is an excellent site for vaccination, so I imagine we will use it in the future, but exactly for whom, I don't know," Farley said. "We don't have specific plans for that yet. I do think there is definitely potential for a lot more. It's a huge space very well-suited for this sort of thing."

Farley confirmed that the city is in discussions with the federal government about a vaccine clinic that would be run in partnership with FEMA.

"Those discussions involve questions about sites and whether the sites come with additional vaccine, or whether the sites would use the vaccine we currently have," Farley said. "Neither of those have been pinned down yet."

Farley repeated that he does not believe Lincoln Financial Field is a suitable site for vaccination at this time, both because of the colder weather and its non-central location in South Philadelphia.

"I do think that as we get more doses in and we need to increase the number (of people) vaccinated, adding larger, high-throughput sites makes sense," Farley said.

"We're not eliminating Lincoln Financial Field from some ultimate use in that regard," Mayor Jim Kenney added. "It's just not going to be the first one out of the box."

As of Sunday, the city has provided 151,946 first doses and 71,949 second doses. Moving forward, the health department will release metrics on weekly doses delivered, running from Monday through Sunday.

Philadelphia officials reported a four-day total of 689 additional COVID-19 cases, bringing the citywide case count to 110,836 since the start of the pandemic.

"These numbers overall are showing a significant decrease in the past few weeks," Farley said. "Our case counts are falling and they're also falling in the state of Pennsylvania, in New Jersey and the United States as a whole. It's really good to see this continued downward trend."

Last week, the city began accepting applications from restaurants to expand their indoor dining capacities to 50% if they are able to demonstrate that they meet safe standards for ventilation. To date, the city has received about 60 applications and approved only 11.

The health department plans to provide more specific guidance to restaurants about how to meet these standards and make the required calculations for their applications, including the pending release of a video demonstration.

City officials said 310 COVID-19 patients are being treated in Philadelphia hospitals, including 44 who are on ventilators. The city surpassed 3,000 fatalities from COVID-19 on Sunday. The death toll stands at 3,001.

"That’s more than 3,000 Philadelphians lost to this terrible virus in less than a year," Kenney said. "My thoughts are with the loved ones of those who we’ve lost. Each life taken is one too many."