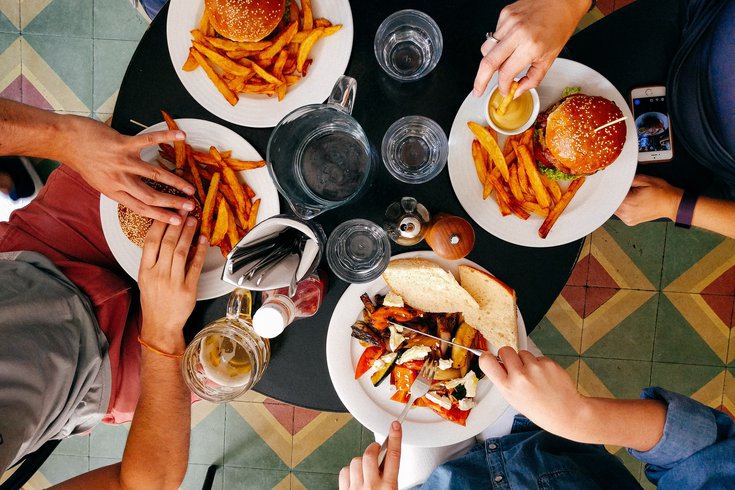 Philadelphia restaurants can increase their indoor dining capacities from 25% to 50% Friday if they are able to meet new ventilation standards established by the health department.

Philadelphia restaurants will be permitted to increase their indoor dining capacities thanks to a gradual decline in new COVID-19 cases in the city and ongoing efforts to ramp up vaccinations.

Beginning Friday, restaurants that can meet enhanced standards for indoor ventilation will be able to expand their indoor capacities from 25% to 50%, Health Commissioner Dr. Thomas Farley said Tuesday.

Restaurant owners can complete applications attesting to their compliance with the new standards. Restaurants using HVAC systems must meet the following ventilation benchmarks:

•HVAC systems must be fully operational and ventilate the entire indoor dining area.
•At least 20% of the air circulated by the HVAC systems must come from outside.
•Air filters must meet a minimum efficiency reporting value of 11 or higher. A higher MERV rating means the filter traps small particles more effectively than filters with lower ratings. The rating scale runs from 1 to 16.
•At least 15 air exchanges per hour must be measured indoors.
•Exhaust vents must be at least six feet from tables, chairs and other items.

For restaurants using window fans, at least 15 air exchanges per hour must be measured indoors.

Restaurants will be required to provide documentation, either from their HVAC maintenance company or the establishment proprietor, certifying that these standards are met. A worksheet to properly calculate air changes has been made available in the form of an Excel spreadsheet.

Pending approval of applications, restaurants will be able to move forward with the expanded capacity and subsequently will be subjected to routine inspections and visits based on complaints. Violations will be given if restaurants are found to be out of compliance with ventilation standards.

"We do think this is a way to try to have restaurants get back on their feet economically and provide service to customers while also doing it safely," Farley said. "We're trying to come up with that balance. Consider what we're doing here with these new standards a sort of Version 1.0.

"We're going to learn from this. I'm sure there will be glitches with it, but as we learn from this, we may be able to adjust. This is an attempt to really try to meet the business goals and the opportunity to get people back to work."

Philadelphia reported 473 new cases of COVID-19 on Tuesday, bringing the city's total to 109,183 since the start of the pandemic.

Eight fatalities reported Tuesday raised the city's death toll to 2,955 since the start of the pandemic.

Farley said he's hopeful that the current downward trend in cases will continue for a while, even as COVID-19 variants become more dominant.

"I am optimistic that the steps that we are taking are keeping the virus rates going down and will continue to do so for at least another two or three months," Farley said. "After that, all bets are off whether one of these variants comes into play and whether that might cause rates to go up, or whether at that point we will have enough people vaccinated to prevent that from happening."

City officials provided additional details on their plan to begin vaccinating teachers, support staff and a child care workers. That effort, expected to begin by the end of the month, will be conducted in partnership with the Children's Hospital of Philadelphia.

"The vaccines will be offered at the Roberts Center on the CHOP campus, plus six different school-based locations," Farley said. Some 20,000 people will be eligible through this partnership.

"We think we can supply them with whatever's necessary," Farley said.

Schools will give CHOP a list of staffers who need to be vaccinated. They will then provide instructions so staffers can schedule vaccination appointments with the health system. Details for child care staffers at pre-K locations are still being ironed out.

"This whole plan will start the week of Feb. 22 and the goal is to complete it over the course of eight weeks," Farley said. "There's a large number of people involved."

The partnership comes amid an ongoing standoff between the Philadelphia Federation of Teachers and the School District of Philadelphia, which wanted some teachers to report to school this week to prepare for the resumption of in-person instruction. The first students will come back Feb. 22 as part of a phased return.

Mayor Jim Kenney intervened Monday, saying teachers would not be required to return to schools until an independent mediator resolves the dispute.

During Tuesday's briefing, Farley said he believes teachers and students are safe to return to the classroom as long as they follow safety standards. He pointed to the many parochial, charter and independent schools that have been open during the pandemic and have not seen significant transmission of COVID-19.

Though Kenney supports the district's plan to resume in-person learning, he acknowledged the right of teachers to organize and seek greater assurances of safety.

"You're not going to be able to force people to go to work," Kenney said. "I mean, especially in this environment. What are we going to do? Send police out to pick them up and take them to the classroom? We agreed to get a mediator. That's the process we're following. In the meantime, we're getting CHOP to vaccinate people. ... We're trying to give everybody a level of comfort and not do it in a contentious way."

Despite limited vaccine availability, the city is continuing to ramp up efforts and recalibrate in the wake of its messy split with Philly Fighting COVID.

As of Sunday night, Philadelphia had provided 121,250 first doses and approximately 50,000 second doses. Most of these have gone to health care workers and vulnerable populations in long-term care facilities, as well as front line workers in Phase IB of the city's vaccination plan.

Through a new federal pharmacy partnership, the city is receiving an additional 4,900 doses of the Moderna vaccine that will be distributed to Rite Aid pharmacies. These doses are intended for people over the age of 75.

Around the beginning of March, the city expects to receive its first shipment of the Johnson & Johnson COVID-19 vaccine, approximately 5,000 to 10,000 doses. The single-dose vaccine is considered less effective at preventing COVID-19 than the Pfizer and Moderna vaccines, but it is regarded as highly protective against severe disease. It must first be authorized by the U.S. Food and Drug Administration.

"This is one more weapon in this battle and it's very much welcome," Farley said.

The city lately has been allocating more vaccine doses to pharmacies than hospitals, which have retained extra supply and have been encouraged to hold mass clinics of their own.

The health department's mass clinics at the Pennsylvania Convention Center have continued for people receiving second doses of the vaccine. The city vaccinated more than 2,500 people last week and expects to vaccinate another 4,400 people this week.

Eligibility for these clinics will be based on information submitted through the city's general vaccine interest sign-up form and will be prioritized according to the city's vaccination plan.

Employers in Philadelphia are invited to fill out the city's new workforce vaccine planning form — which applies to Phases 1B and 1C — in order to set a plan in motion with the city to get their employees vaccinated.

Despite national discussion about the use of NFL stadiums as potential mass vaccination sites, Farley said Philadelphia does not view Lincoln Financial Field as a preferable location at this stage of the vaccine rollout.

"I don't think that that's the best way to get vaccine available right now," Farley said. "We have a limited number of doses and if we ran a mass clinic down there, we would be vaccinating more people from New Jersey or Delaware than we would from the city of Philadelphia. We are only given doses appropriate to the population of the city.

"Having something that's more centrally located to people who are in Philadelphia neighborhoods than the stadiums — and accessible to people who don't have cars — is more important to us right now," Farley said.