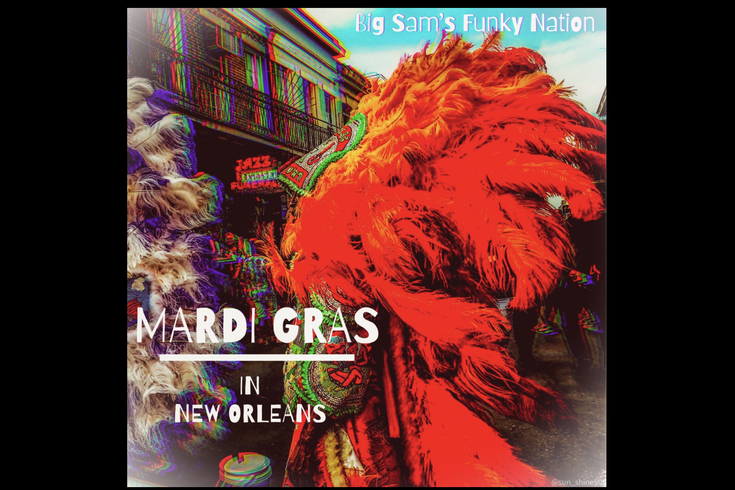 Above is the artwork for Big Sam's Funky Nation's new single 'Mardi Gras in New Orleans,' which was released Jan 13.

Confined to his home like everyone else during a long quarantine last year, Sam "Big Sam" Williams has not stopped working on new music. A fixture on the New Orleans music scene as trombonist and bandleader of Big Sam's Funky Nation, Williams has found his niche blending traditional New Orleans jazz with funk, rock and hip hop.

But when COVID-19 hit, the days and nights of playing clubs and making the rounds at music festivals abruptly stopped. Musicians like Williams who made their living playing shows were suddenly picking up side jobs, really anything that could keep them afloat after the gigs dried up last March and the region was hit hard by the virus.

Ellis Marsalis, the patriarch of the famous jazz family, died last April from COVID-19 complications at the age of 85. Many people both in and out of the music industry in New Orleans have been touched by the virus personally and professionally.

For Big Sam's Funky Nation, performing during COVID came down to a few live-streamed driveway performances for tips last summer, but nothing that would come close to the New Orleans Jazz & Heritage Festival, which continues to get pushed back each season, first to the fall of 2020 and now to maybe the end of this year. 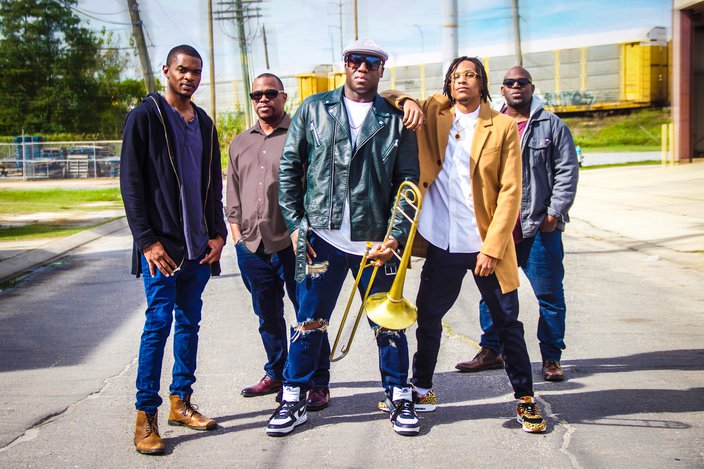 The time spent off the road meant Williams could focus on writing. Big Sam's Funky Nation, which already has six albums under its belt, dropped a new single in January, "Mardi Gras in New Orleans," which he said "brings the spirit of the city that says, 'We're still here.'"

The video was released just in time for Mardi Gras, which begins Tuesday. It showcases a who's who of the Big Easy scene, with artists like The Bolden Boys, Anjelika "Jelly" Joseph (who's featured on backup vocals), Terrylyn "Secondline Shorty" Dorsey and the Wild Magnolias Indians with Big Chief Shaka Zulu on percussion.

"It's a whole lotta New Orleans," Williams said of the video. It showcases the city's decorated houses, which have creatively replaced the usual Mardi Gras parade floats this year, as well as the strut and costuming associated with Mardi Gras celebrations. The video captures the soul of a city that always seems to find a way to bring the fun no matter what adversity it faces.

The videographer, who's originally from Philadelphia, goes by the name Dragon and has been based in New Orleans for the last five years operating Black Dragon Imagery.

"I wanted to create the world of energy of New Orleans," he said of the video. Dragon uses colorful backdrops, shotgun houses and star-studded cameos, to showcase the New Orleans he knows in its purest form.

"Now with COVID," he explained, "everything is shut down. But (in the video) we have the dancing in the streets, the Indians; we wanted to bring that to the world. It makes you feel the Mardi Gras without being so commercial on Bourbon Street."

Dragon added, "I've worked around the world, but New Orleans is the most interesting and unique place. This video is a showcase of how this culture is deep-rooted and timeless."

As much as both the song and video celebrate Mardi Gras, the new production is also an anthem of survival. The world saw the Bayou's strength in startling ways after Hurricane Katrina and again now with COVID.

But the video itself is celebratory, a love song to a place and its people. Williams even shows off his own bouncy moves as the band fuses the familiar New Orleans brass sound with upbeat radio-ready riffs.

"This year everybody says Mardi Gras is canceled," Williams said. "It's not canceled. It's just different this year."

The scene is radically different on Bourbon Street, which is virtually unrecognizable to anyone who's walked the famed street with an iced cocktail in hand. The whole French Quarter, usually packed with revelers on the streets and balconies, has been cordoned off to prevent crowds from unsafely gathering in number (though video from the past week has drawn some ire over partiers seeming to ignore social distancing and mask wearing, prompting shut downs of several bars).

Many of the clubs that would normally be booked with live music act are shuttered, and bands like Big Sam's Funky Nation are finding other ways to celebrate, like playing a live-streamed show on the balcony of the New Orleans Jazz Museum on the afternoon of Mardi Gras.

Not being able to celebrate Mardi Gras in the same way, the lifeblood of the city's arts, hospitality and tourism, is having an impact on the culture this year. Baham, trumpeter with the band, said, "It's kinda like Philly without the Liberty Bell. It's like if someone said we're gonna take the Liberty Bell today, and we're not going to see it for another year. This is the staple of our existence."

Baham is one of the Funky Nation who's using the downtime to work with other artists in his recording studio, as well as producing podcasts. He admitted that one part of Mardi Gras that hasn't gone anywhere is the family connection.

"Mardi Gras is really family oriented," he said. While the world may associate the experience with drinking and debauchery, smaller events attracting locals have always helped distinguish the celebration in uniquely New Orleans ways, like having a barbecue or small party on the block. "We have our spots," Baham said.

With masks and social distancing, it may look different from years prior, but he said the spirit is still there – even if the jobs are not.

The effects of COVID-19 closures have been sobering on the New Orleans economy, and most notably for performance artists. According to a study by the City of New Orleans, more than 5,000 working musicians make their home in NOLA and ultimately contribute to the culture of the region.

With a population of just under 400,000, as many as 38,000 of New Orleanians are considered "cultural workers," meaning they work at music and arts venues, restaurants and other destinations that attract locals and tourists alike. But since COVID shut down businesses that rely on eating, drinking and attending performances, the entire scene has shifted into low gear.

For example, usually the guys in Big Sam's Funky Nation are working day and night leading up to Mardi Gras. Henderson, who plays bass with the band, said this the first year he can remember that he's able to actually attend some events like the Zulu Ball, which like everything else in the city, has been toned down because of COVID guidelines.

Usually he would be playing multiple shows throughout Mardi Gras in a city that averages almost 90 unique, live performances each day. Henderson, like most working musicians, usually makes enough in the festival season to sustain throughout the year, but 2020's closure is putting the hurt on him and everyone. There are just no shows, which is affecting both signed and independent musicians alike who are essentially gig workers who do not always qualify for unemployment benefits.

'The first Mardi Gras song in a long time'

Williams, who's worked with headliners like James Brown and Dave Matthews, and was a member of the Dirty Dozen Brass Band, was inspired to write "Mardi Gras in New Orleans," from the frustration of being locked out of the city's exuberant culture for almost a year now. He says being able to deliver a new Mardi Gras song means a lot right now, especially after the year everyone in his community has experienced. 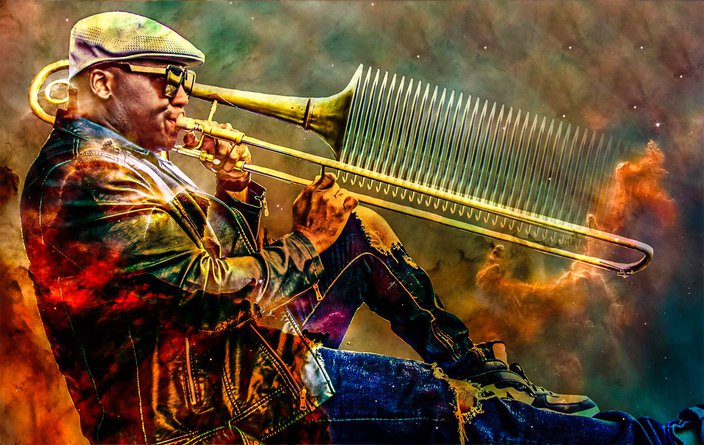 'Big Sam' Williams is pictured in the artwork above playing his trombone in New Orleans. Williams is the band leader for Big Sam's Funky Nation. He was previously a member of the Dirty Dozen Brass Band and father to the famous Bolden Boys.

"People are loving it," he said since the song dropped January 13. "It's what we needed. The classics that have been here, but this is the first new Mardi Gras song in a long time."

Even so, a download or a live stream still can't replace the feeling of playing live, of having the special connection that both artists and audiences value. "They're missing. We're missing it," said Williams, who doesn't realistically expect to get back to performing live until 2022. DJs and soundtracks are replacing live music in most clubs. "It's hard for us," he said.

"As long as we're working, we're fine," said Baham, who hopes that the music scene in New Orleans and elsewhere can be sustained for as long as it takes to get back. In the meantime, artists have been finding other ways of surviving and doing what they love, whether that means live-streaming from the backyard or driving Uber.

Last time Big Sam's Funky Nation did a live stream, about 10,000 people tuned in. "If everyone donated a dollar, can you imagine?" he said.

One way to support bands like this one is to buy their music. Though you can find Big Sam's Funky Nation on streaming services like Spotify, the artists are not really getting financed through the apps in the same way as if you download the music from iTunes.

Williams hopes that the vibe from the new music he and others are creating will bring some levity to these challenging times – and be their soundtracks as they find their own ways to celebrate.

Williams still remembers playing Philly's World Cafe Live as part of a program that helped musicians displaced by Katrina get work again. He wants to come back to Philly and play in a post-COVID world. But the big question on his mind, and really everyone who loves music, is when that will happen? Will the venues survive until then? Will people still show up?

In the meantime, he expects to play to virtual audiences while relying on the kindness of fans via Venmo (@FunkyBigSam). But the invite and call responses just aren't the same. Williams said last year the band lost three months of gigs during festival season alone, and at least 20 other shows in addition to that. It didn't stop them from launching into their tracks like "4 da Funk" and "GimmeDat," all the while spaced 6 feet apart in the driveway for tips. It might just be enough, Williams told The Washington Post last summer, to buy some groceries.