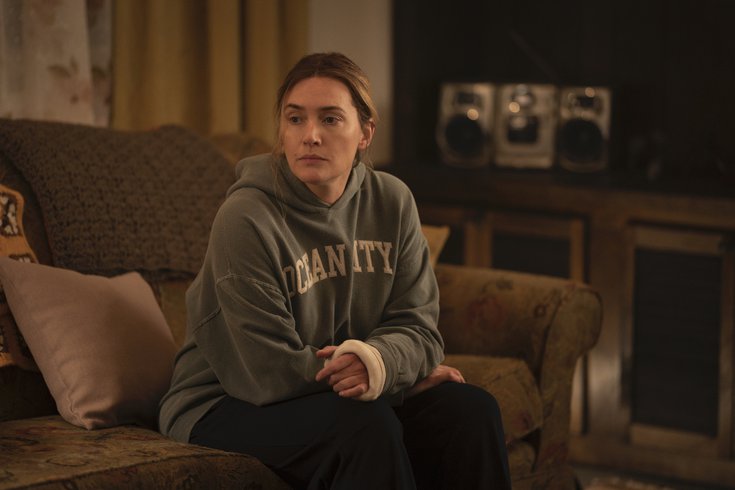 'Mare of Easttown,' a new limited series starring Kate Winslet as a detective in the Philly suburbs, will premiere April 18 at 10 p.m. on HBO and HBO Max.

HBO will premiere the first episode of "Mare of Easttown," a limited detective series starring Kate Winslet, on April 18 at 10 p.m.

Winslet reportedly swaps her natural British accent for a Delaware County one for the series, though the character she portrays is a small town detective living in nearby Easttown Township, Chester County.

LATEST: Rave reviews for 'Mare of Easttown,' as HBO's detective drama set in the Philly area readies for premier Sunday

During a recent virtual panel, Winslet said adopting the Delco accent was one of the most challenging accents ever required of her, IndieWire reported. Winslet said attempting it even made her "throw things."

"It was up there with the hardest accents I’ve ever done, in the top three for sure," Winslet said. "It’s one of only two dialects in my life that made me throw things — that and the dialogue that they made me do in the movie about Steve Jobs."

"The thing that was hardest for me was to do (the Delco accent) well enough that you don’t really hear it," Winslet said. "That’s what’s important to me: to make it disappear and blend in."

Despite the challenges of learning the Delco accent, there were some positives of filming in the Philadelphia region. Winslet said Wawa is now a big part of her life.

"I didn't go to the King of Prussia Mall, but Wawa is a big part of my life." -Kate Winslet, sans context #TCA21

In "Mare of Easttown," Winslet plays a character named Mare Sheehan who is investigating a local murder "while her life crumbles around her," according to HBO. The show will explore "the dark side of a close community."

The show's local hype dates back to November 2019, when filming began in the Coatesville and Downingtown regions of Chester County. Portions of the show also were shot in Delaware County.

HBO has not released any teasers or trailers for "Mare of Easttown," but a short peak of the show can be seen below.

Winslet, known for her roles in "Titanic," "Revolutionary Road" and "Eternal Sunshine of the Spotless Mind," is serving as an executive producer of the show — a first in her decades-long career.

Evan Peters of "American Horror Story" and Guy Pearce, who starred in "Memento," are among the additional cast members.

Series creator Brad Ingelsby grew up in the area. His father, Tom, is a former Villanova University basketball player. His brother Martin coached the University of Delaware basketball team.