What they're saying: 'Mare of Easttown,' HBO's detective drama set in the Philly area premieres Sunday 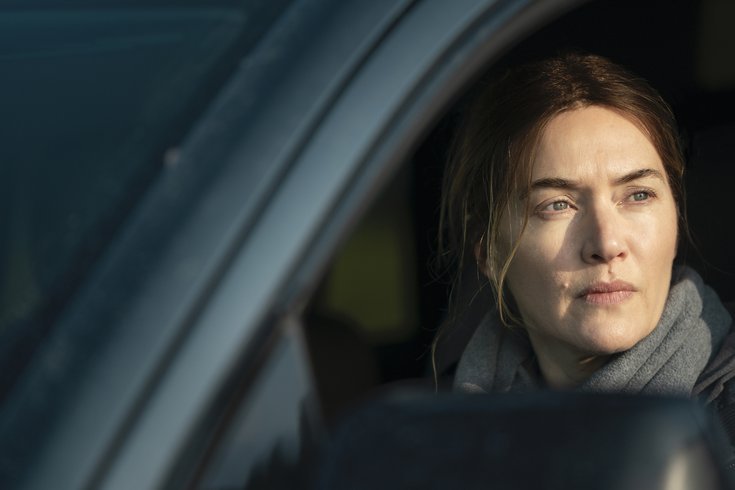 Kate Winslet stars as a small town detective on a murder case west of Philadelphia in HBO's "Mare of Easttown," a seven-part series that premieres Sunday, April 18, 2021.

Philadelphia's western suburbs will be showcased this Sunday when "Mare of Easttown" premieres on HBO at 10 p.m. E.T., featuring Kate Winslet as the lead detective on a small town murder mystery.

Buzz around the series, which began filming in the region in 2019, has been building for more than a year. Production delays caused by the coronavirus pandemic pushed the series back, but the anticipation of Winslet's Delco accent and a look inside the life of a sleuth under pressure have only grown in the interim.

Much of "Mare of Easttown" was filmed in parts of Chester and Delaware counties, in towns including Coatesville and Downingtown. Local casting agency Heery-Loftus had posted several calls for extras during the initial production phase. Winslet reportedly even shadowed members of the Easttown Township and Marple Township police departments to get a handle on her role.

The script was written by Brad Inglesby, a Berwyn native and Villanova University graduate. He aimed to give Winslet, who plays the titular role of Mare Sheehan, a complex character arc that deconstructs tropes about unflappable homicide investigators.

Sheehan is a former high school basketball star in Easttown whose miracle shot from her youth remains the most indelible memory in her town's history. When a young woman's body is discovered in the woods, the unsolved case builds resentment about another missing child case that hasn't been cracked for over a year.

Mare is called upon to find answers, but the dysfunction of her personal life weighs heavily on her efforts. From a distant divorce to the lifelong wound of her son's suicide — and the young child he left behind for her to raise — she's compelled to find purpose in bringing justice to Easttown.

The cast also includes Evan Peters, who plays a county detective; Guy Pearce, a creative writing professor; and Julianne Nicholson, Mare's best friend since childhood. Others include Angourie Rice as Sheehan's teenage daughter and Jean Rice as Sheehan's mother. Sosie Bacon, the daughter of Philadelphia native and actor Kevin Bacon, has a small part in the show as well.

Early reviews of "Mare of Easttown" have been positive, with particular praise given to the atmosphere of the Philly suburbs. From TVLine:

We've seen murder investigations like this before, but it's 'Mare's' remarkably rich sense of place that sets it apart. Writer Brad Inglesby and director Craig Zobel ("The Leftovers", "Westworld") spend almost the entire first hour just introducing us to the rhythms of the town and letting them breathe. It feels slow at first, like you're waiting for the story to start, but before you know it, the characters start to grow on you. This is also a part of the country that TV shows don't often spend a lot of time in, and it's refreshing to see it get the spotlight.

As Slate noted, the Philadelphia accent is a daunting challenge for any actor, but Winslet gets the job done in a believable way:

"Mare of Easttown" creator Brad Ingelsby grew up in Delaware County ... and his script for the seven-part series was peppered with phonetic spellings to help set the scene. But he says it wasn't until Winslet decided to go all-in on the accent that the production was able to commit to it across the board. "I think it was really important to Kate," he says. "She said, 'If this is about this part of the country, about this community, if we're trying to have the community as a character in the show, then it has to be real.'"

USA Today gives Winslet accolades for selling a role that any other actress may have failed to execute:

Winslet's utter dedication to the role, down to her near perfect assimilation of the regional accent (which, as a resident of Southeastern Pennsylvania I can give my stamp of approval to) enhances the already engrossing script. Mare is so inherently human, deeply flawed but deeply relatable. She occasionally does something so loathsome it would have made a lesser character in the hands of a lesser actress irredeemable, but Mare's appeal helps soften the blow.

IndieWire likens "Mare of Easttown" to another of the network's acclaimed crime dramas:

HBO's "True Detective" is all over "Easttown," from its angry, brooding, not-entirely-by-the-book lead detective to the semi-rural setting that's both atypical and spooky. Its structure also mirrors the better seasons of Nic Pizzolatto's anthology drama, balancing her tumultuous personal life with dozens of juicy clues meant to tease the audience as well as Mare herself, even if a few too many prove to be red herrings (or red Mare-ings?).

Entertainment Weekly likewise gives Winslet accolades for her versatility as an actress and her ability to blend into the social setting of her role:

Almost 25 years after "Titanic," Winslet has great fun living down any notion of aristocratic glamour. Her default expression is an exhausted frown. She sucks on a perpetual e-cigarette, which will never look cool on anyone. The Brit also throws herself into the regional accent — "water" as wood-er, "on" with two syllables — and lets her flannel do the talking. When Mare busts her ankle chasing a junkie, Winslet adopts a magnificent limp that maps a whole psychology. Every step seems to say: Christ, another thing to deal with.

Finally, the Wall Street Journal credits Inglseby for creating a world whose setting and society never feel forced, with Winslet exemplifying that familiar mix of local baggage and professional dedication:

For all the worries that pursue her, the memories that haunt her, she manages to live that life with gusto. In this she's like everyone else in Easttown, a world of people with troubles. The atmosphere of crisis is pervasive — people suffer, they drink, they rant — and it's a testament to the writing (Brad Ingelsby wrote the script) that no moment in this saga ever feels even remotely unreal.

In what has been a banner year in film for the Philly area — from M. Night Shyamalan's "The Servant" to Idris Elba's starring role in "Concrete Cowboy" — "Mare of Easttown" figures to raise the local profile further over the next two months. The seven-part series will air one episode per week on Sunday nights.

Check out the trailer below.