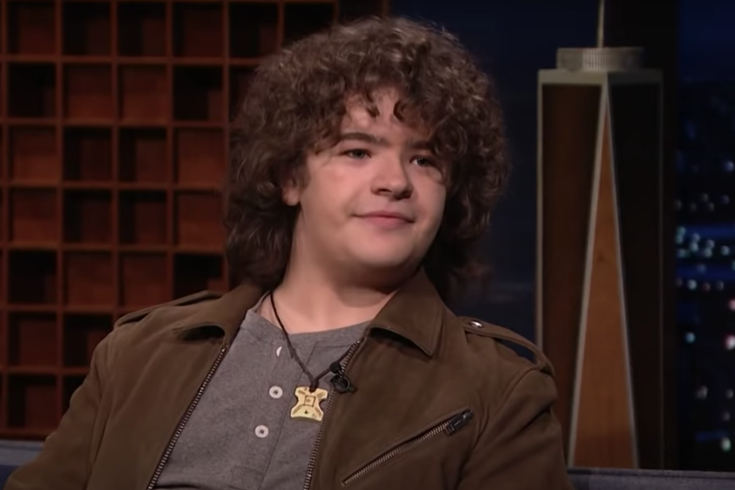 Actor Gaten Matarazzo says playing too much Mario Kart helped motivate him to pick up a part-time job at the Jersey Shore last summer.

While film production for the fourth season of "Stranger Things" was paused last year due to the COVID-19 pandemic, actor Gaten Matarazzo decided to take up a part-time job at a Long Beach Island restaurant.

The Little Egg Harbor Township, Ocean County native talked more about his experience as a food runner with Jimmy Fallon during an appearance Tuesday on "The Tonight Show."

"Over the summer during the pandemic, there were a couple of restaurants near where I live in New Jersey that were open because they all had outdoor seating," Matarazzo said. "Both of my siblings got a job at this place, a couple of my friends, some of my cousins did too, so everybody I've ever known and met and talked to."

The 18-year-old Matarazzo said playing too much Mario Kart at home pushed him to take up the temporary job.

Matarazzo said his typical work day consisted of waiting for orders to be completed and bringing food to tables. He even attempted to go incognito while on the job, but Matarazzo admitted that his disguise failed.

"I had the restaurant shirt on, I had a hat that was for the restaurant," Matarazzo said. "I had to tuck all my hair into the hat. I had one of the sleeve masks, the ones you pull over your whole face and I tucked that into the hat so just my eyes could be seen. And people still recognized me. I would go to tables and drop food and go 'Here you go. Enjoy.' I wouldn't even let them hear my actual voice and the table would just look at me for a second, squint and be like 'Are you Gaten Matarazzo?'"

Matarazzo said that some customers freaked out when they recognized him, which he said was pretty fun to see.

The restaurant is believed to be Bird & Betty’s in Beach Haven. Matarazzo’s family members reportedly are employed at the eatery, and his band previously performed there in 2019.

Matarazzo said that film production for the fourth season of "Stranger Things" is coming back, and he warned fans that the upcoming season is shaping up to be the show's scariest yet.

"That's the one thing I've noticed," Matarazzo said. "As I'm reading [the script], I'm like 'They're going for it this year. That's pretty cool.'"

Matarazzo has starred as character Dustin Henderson in the first three seasons of the popular Netflix show.

"Stranger Things" has been nominated for 31 Emmy Awards, earning six wins, since it premiered in 2016. It also has received four Golden Globe nominations and three Grammy Award nominations.

Below is a trailer previewing Season 4 of the critically-acclaimed show.