John McMullen: The Jaquiski Tartt signing puts a period on the Eagles’ transition 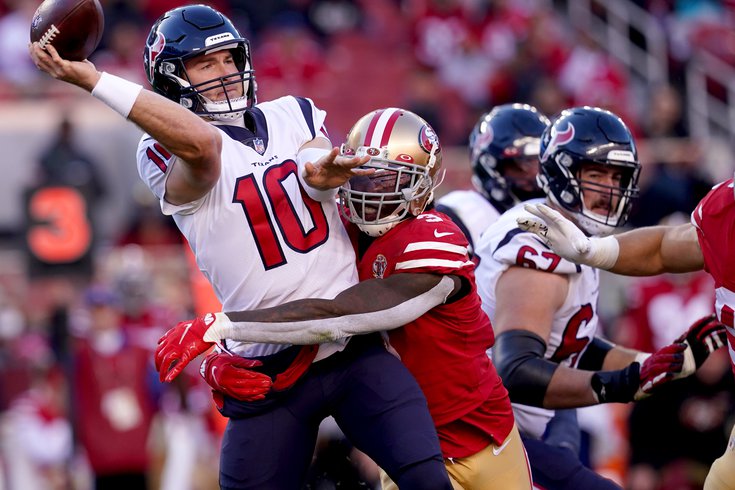 The Jaquiski Tartt signing is a significant one for the Eagles, not necessarily for the player himself but for what the veteran safety represents.

Unlike his former college teammate, James Bradberry, there was no salary cap context as to why Tartt was still on the market so late in the process. The 30-year-old was there on merit, grading out in the bottom tier of safeties for San Francisco last season, above average in run support and poor in coverage, according to Pro Football Focus.

In a macro sense, though, Tartt has been a big part of some very good defenses in San Francisco over his seven-year career since arriving as a second-round pick out of Samford in 2015.

He’s got significant starting experience as a professional and if you like to drop a prop bet or two, there is a good chance that Tartt is a starter for the Eagles in Detroit on September 11 opposite either Anthony Harris or Marcus Epps. If you’re looking for better value, the smarter money might go in the other direction, however, because while it’s not 50-50 or anything even close to that, the longshot of Tartt not even making the team and being in uniform against the Lions is also realistic.

Tartt is truly an insurance policy, similar to other veteran safeties the Eagles' have brought in over recent seasons, some that "hit" like Corey Graham and Andrew Sendejo (for half a season at least until compensatory-pick math kicked in and ironically led Philadelphia to Epps) or ones that didn't like Johnathan Cyprien and Andrew Adams.

The best-case scenario for the Eagles at safety remains Harris as the steady, veteran presence, the ascending Epps taking the baton with the other starting job and running with it followed by the light going off for K’Von Wallace in his third season. From there the fourth safety spot would default to Michael Clay and special teams with Andre Chachere the frontrunner over Jared Mayden because Tartt isn't likely to help you there.

As a player, most will default to Tartt as a box safety because of his size (6'0", 215 pounds) and the realization that supporting the run is what he did well last season but that’s incorrect, according to one NFL scout.

“Think about where he comes from,” the former personnel man said. “If [the Eagles] are going down the [Vic] Fangio route there is going to be heavy post-snap rotation and Tartt understands how to do that from all his years in San Francisco. As far as understanding the defense he should be way ahead of the others.”

In other words, Tartt is a fit from a schematic standpoint for what Philadelphia is planning to run defensively but it remains to be seen how much he has left in the tank physically.

The far more important part of the Tartt signing isn't about Xs and Os, though. It's about what the move represents.

Howie Roseman readily admits hope is never a strategy, so the organization crossing its fingers with Epps and Wallace isn’t a prudent path for a team that isn’t in a defined rebuild or, as rebranded wordplay in Philadelphia, a transition.

The evidence was already there that the Eagles had turned the page from the Jeffrey Lurie-coined transitional year in 2021. With the acquisitions of veterans like A.J. Brown, Kyzir White and Bradberry, along with the targeted move up in the draft to get the largest – both literally and figuratively – piece of the puzzle for Jonathan Gannon’s defense in Jordan Davis, that much is clear.

The need on the back end was always understood and that's why a significant bid was placed on Marcus Williams in free agency and why the organization kicked the tires on Tyrann Mathieu. Going Kyle Hamilton in the draft would have meant eschewing Davis. so the one glaring omission that remained for the Eagles into June was safety.

And the signing of Tartt is the period on the declarative statement inside the NovaCare Complex that says, "We can compete.”

John McMullen is a contributor to PhillyVoice.com and covers the Eagles and the NFL for Sports Illustrated and JAKIB Sports. He’s also the co-host of “Birds 365,” a daily streaming show covering the Eagles and the NFL, and the host of “Extending the Play” on AM1490 in South Jersey. You can reach him at jmcmullen44@gmail.com. Follow John on Twitter.