Mailbag: Could the Eagles use rookie DT Jordan Davis at times on offense? 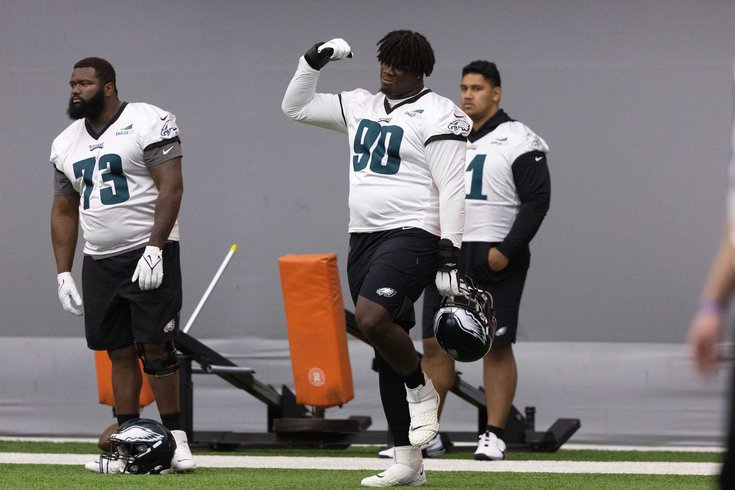 On Wednesday, I solicited mailbag questions on Twitter for a mailbag post. I received so many good questions that we published a mailbag post on Thursday as well as another one today. Here's Part II, and as always, thanks again for doing half the work for me, friends.

Question from Patrick: Could you imagine a goal line situation where Jordan Davis gets a carry?

Davis was actually something of a regular in Georgia's goal line offense. Here he is at TE (right next to the LT) caving this poor DE down the line and opening up a massive hole for a TD:

My Granny could score a TD behind Jordan Davis, Jalen Carter, and Darnell Washington. pic.twitter.com/g0uRbkNlq3

And that wasn't just a gimmicky usage against some overmatched team. Here he is against Alabama playing TE and once again helping open up a hole for a TD.

Jordan Davis absolutely BULLIED this dude to open up a hole for the TD pic.twitter.com/emqjU9qvhU

If the Eagles lined up Davis, Jordan Mailata and Landon Dickerson on the left side of the line in goal line situations, it would be over a thousand pounds of steamrolling nastiness.

And finally, here Georgia lines up Davis at TE before shifting pre-snap and handing the ball to the big guy for a TD.

Jordan Davis rushing TD this year. Lock it in 🔒
pic.twitter.com/VmFUP2yzZp

Both Doug Pederson and Nick Sirianni have been asked in the past about the possibility of giving the ball to Mailata in a goal line situation, given Mailata's ball-carrying experience playing rugby, and they both sort of laughed it off.

But with Davis, I do see the benefit of playing him at tight end in goal line packages. He'd be more effective in there than, say, Andre Dillard, in my opinion, because he (a) would be more aggressive, and (b) can actually move linemen against their will. Yes, I'm saying that I think Davis would be a better goal line run blocker than a former first-round offensive tackle. And as long as he's in there on occasion in those packages, yeah, why not get him a TD in a blowout like the Eagles did a year ago with Lane Johnson.

Question from Ben's Dad, the Illuminator: If the Eagles are going to be mixing in more odd-man fronts on a regular basis, what does the base personnel for that look like? Davis as the nose tackle? Reddick on the line?

In odd-man fronts, I think the Eagles have a lot of versatile guys who can play all three spots, but primarily the noses would be Javon Hargrave and Davis, with Fletcher Cox, Milton Williams, and even Brandon Graham playing more of a "3-4 DE role," generically speaking.

I think the more interesting possibilities involve what they can do at linebacker. In traditional 3-4 looks (don't know how much we'll see of that, really), I think it's pretty straightforward. The edge rushers would be Haason Reddick, Josh Sweat, Graham, Derek Barnett, with two of Kyzir White, Nakobe Dean, and T.J. Edwards at ILB.

It's the 3-3-5 looks that could be fun from a personnel perspective. You could see packages with the top three off-ball linebackers (White/Dean/Edwards) all on the field together. I think a 3-3-5 is also a look where you could see Haason Reddick on the field instead of one of the off-ball LBs, rushing the passer from a variety of alignments. Or perhaps Reddick and Josh Sweat both on the field, forming almost sort a 5-1-5 look. There are no shortage of possibilities.

The additions of Reddick, Davis, Dean and White give Jonathan Gannon the opportunity to be more creative in confusing opposing quarterbacks than he did a year ago.

Question from :0: Is Nick Sirianni on a short leash, or anyone within his coaching staff?

For the first time in a long time, the Eagles kept the entirety of the coaching staff together. Sirianni had his bumps in the road as a rookie head coach, but ultimately, there was a lot more good than bad. I don't think his seat is warm.

I do think Jonathan Gannon has to show significantly better results this season, again, with the additions of Reddick, Davis, Dean, White, James Bradberry, and we can probably even throw Graham in there as well.

Question from Sam Becker: I enjoyed your revisiting of the 2022 and 2017 rosters. My question concerns growth. We keep talking about how much Hurts will grow one year to the next. How about coaches? How much growth should we expect from Nick and how do we measure it?

When Jeffrey Lurie introduced Sirianni as the team's new head coach during the Sirianni's initial press conference, he cited "what coach he can become and what organization we can become with his leadership."

Lurie seemed well aware that there would be bumps in the road initially, which proved to be prophetic. Credit Sirianni for weathering those early bumps in a hardcore football city and improving as a head coach as the season progressed. It will be interesting to see how he evolves from Year 1 to Year 2.

I think there are tangible and intangible ways to measure his growth. There's no shortage of stats to measure the offense's efficiency, whether that's DVOA, EPA/play, success percentage, etc. Those are the tangible metrics. The intangibles are a little more subjective. Is he putting his players in the best positions to succeed, based on their skill sets? Are his game plans logical? Is he making the necessary in-game and in-season adjustments?

As for 2022 Sirianni vs. 2017 Doug Pederson, the edge has to go to Pederson, who was an absolute stud that season from start to finish.

Pederson didn't maintain that extremely high level of coaching in subsequent years, but that one season was one of the best coaching performances Philadelphia has ever seen.

Question from Fritz Green: [If Gannon isn't the defensive coordinator next year], who replaces him? Are they grooming Nick Rallis?

I don't know if this will remain the thinking next year if a change is necessary, but my understanding is that if Gannon had gotten a head coaching job this offseason, the Eagles would have strongly leaned toward promoting from within, with Dennard Wilson being a strong candidate.

Question from Mid Major Matt (asked a few days ago): If you had to guess, what FA safety will Howie sign or trade for to fix that position?

OK, but seriously though, I got some questions why I don’t have Tartt starting on my Eagles depth chart. It’s because he’s a 30-year-old, oft-injured box safety who doesn’t really fit the scheme as a traditional centerfielder type, who was still available in June and almost certainly signed a low-cost, one-year deal. I think he’s a third safety, at best, and if you’re of the opinion that safety is a position the Eagles needed to address between now and the start of the regular season, I would view this move as a disappointment, at least if there are no further moves forthcoming. The team itself certainly didn’t announce this move with much enthusiasm.

The top two are Arizona and Chicago, and then there's a big dropoff after that. I was hoping to get Chicago early in the season, and Arizona late, but it wasn't to be. I'll just go ahead and rank all eight:

1) Cardinals: Sedona is a little more than an hour up the road. I'm a big fan, and will probably stay an extra day and go hiking or something. If not, at a minimum, I'll look for a Phoenix hotel with a decent enough pool.

2) Bears: Warm Chicago is a lot more fun than cold Chicago, but it's an easy enough flight and a fun city regardless. The walk through the park to Soldier Field from the Chicago Hilton is a fun experience.

3) Colts: I spend a few days every year at the NFL Combine in Indy, so I know it well by now, and the entire downtown area is walkable. I know where I like to stay, where to eat, etc., and there's something to be said for familiarity.

4) Giants: Basically a home game. When this game is in primetime the drive home really sucks, but a 1:00 p.m. kickoff works.

5) Texans: After this trip is complete I will have covered a game in every NFL city, but I've never been to Houston, so I have no first-hand opinion of it. TBD.

6) Lions: Detroit isn't as bad as it's made out to be, but this is strictly a business trip whenever the Eagles play there — fly in late Saturday night, work all day on Sunday, out of there early Monday morning.

7) Commanders: Everything about game day in Landover, MD is bad. I do like getting it over with early in the season, so a Week 3 road game here isn't terrible.

8) Cowboys: The food spread puts most wedding reception spreads to shame, and the game is almost always high stakes in the NFC East, which gives it added juice from a football perspective. The city of Dallas is fun, or so say some of the other beats who stay there. I don't. It's too far out of the way from the stadium (in Arlington), and thus inefficient, time-wise, especially for a game that is usually in primetime.

It's not uncommon to cover this game, get back to your hotel at like 2:00 a.m., and then you're getting two or three hours of sleep before getting up and heading back to the airport. I usually wind up staying in no-frills hotels in Bedford, Euless, or Grand Prairie, allowing for easy transportation via Uber to and from the game, as well as to and from the airport. 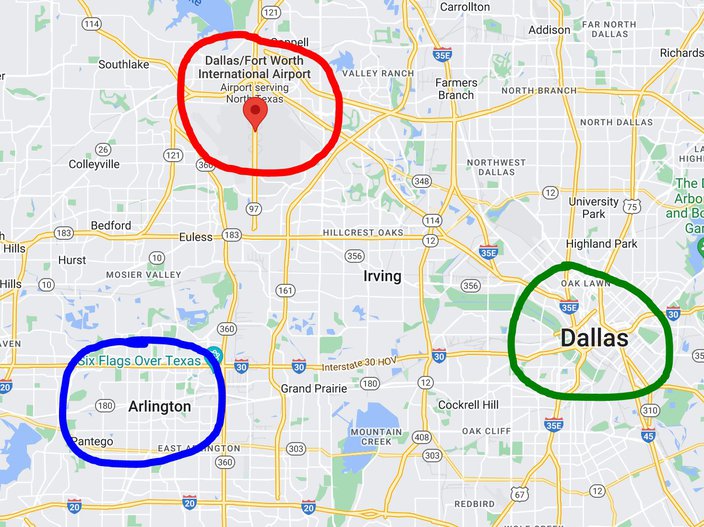 I would normally have the Cowboys much higher on the list (maybe as high as third?), but this year the game is on Christmas Eve, which wrecks any plans to watch my daughter open her presents on Christmas morning.