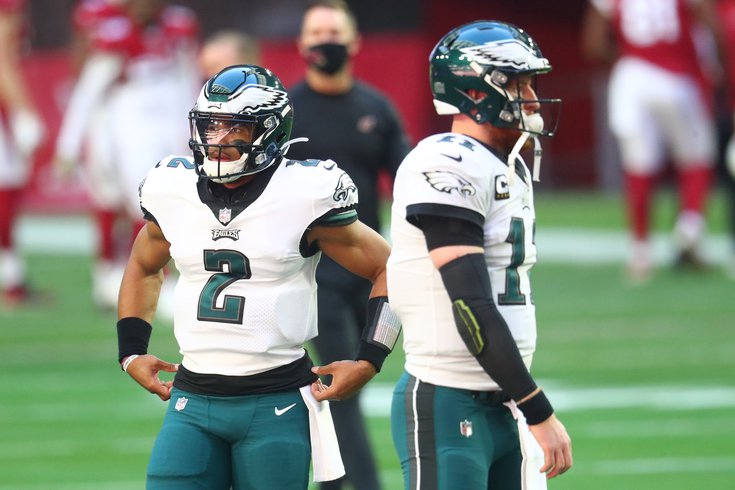 The Philadelphia Eagles, on paper, have a good roster. I debated with some friends recently how close their current roster is to the Super Bowl-winning 2017 roster. So what the hell — let's compare the two rosters, position-by-position.

To note, we're judging the 2017 team based on what they actually were that season, not the perception of what they might be heading into that season, if that makes sense.

Before he tore his ACL in Los Angeles, Wentz was the best player in the NFL in 2017, and the biggest reason the Eagles had home field advantage throughout the playoffs. If Hurts becomes a top half of the league starter in 2022, that will be progress. But clearly, there is a huge gap between what Wentz was that season and what Hurts was in 2021. We'll see if Hurts can make a substantial leap in 2022.

The 2022 Eagles have a good backup in Minshew, but he doesn't compare to the GOAT of backup quarterbacks in Foles.

Ajayi wasn't added until close to mid-season, but we'll include him here. The 2017 Eagles had a power rushing attack, especially after the loss of Sproles, as all three of Blount, Ajayi, and Clement were listed at over 220 pounds each, with Blount hovering at around 250.

Both of these groups of backs are/were beneficiaries of outstanding run-blocking offensive lines.

Jeffery was the star of the 2017 wide receivers, and yet he still only had 789 receiving yards, though he did haul in 9 TDs. Agholor had a bunch of big plays in a breakout season during which he had 768 receiving yards and 8 TDs. Torrey Smith had his moments but also had inconsistent hands.

The 2022 Eagles, on paper, have a borderline top 5-10 kind of wide receiving corps. DeVonta Smith is the smooth route runner, Brown the tackle-breaking YAC machine, and Watkins the speed guy.

Ertz in his prime was a top 3 tight end in the NFL. Goedert has fewer flaws in his game than Ertz, but is not yet close to what prime Ertz was as a go-to chain-moving receiver in high leverage situations. The 2017 team also had far better TE depth.

Both of these lines are/were stellar. Here's who I would give the edge to at each individual position:

LG: Wisniewski carved out a nice NFL career, but Dickerson is already better than Wisniewski ever was.

RG: Brooks was one of the top guards in the game in 2017. There's no contest between him and Seumalo.

Depth: Halapoulivaati Vaitai was the top OT backup on the 2017 roster, and Seumalo was a backup interior guy after he was benched after Week 2. The Eagles were lucky they didn't suffer more injuries than just the one to Peters. Hell, Chance Warmack started some games. The 2022 team is better positioned, depth-wise.

Verdict: It's close, but I think the 2022 offensive line is slightly better.

2017 Cox was elite, while Graham was in his prime. They're both better than 2022 Cox and Graham. I would also take 2017 Barnett, who showed some promise at the time, over present-day Barnett. Otherwise, the 2022 group of DTs in Hargrave, Davis, and Williams are far better than Jernigan, Allen, and Vaeao.

At DE, this is an imperfect exercise because Reddick likely won't be a "traditional DE," but since he's going to spend most of his time rushing the passer, we'll include him here. I'll take Reddick and Sweat over Long and Curry.

Bradham had some inconsistent years in Philly, but he was a stud in 2017. Add in the talented Hicks (even though he got hurt) and a nice, contributing season from Kendricks, and I'll take them over Edwards and the promising but still unproven tandem of Dean and White.

Robinson was one of the best slot corners in the NFL in 2017, but Mills and Darby weren't as good as Slay and Bradberry.

Jenkins was a beast, while McLeod was in his prime. Even Graham was a solid contributor in 2017 before his sharp decline began in 2018. 2017 Corey Graham might start for the 2022 Eagles.

Elliott had a great season in 2021, but he made some of the most clutch kicks in team history in 2017. The NFL should just forget about the five-year waiting period to get in the Hall of Fame and just induct Donnie J'owns right now.

We should also note that the 2017 squad had special teams studs like Chris Maragos and Bryan Braman. The 2022 does not have special teamers on their levels.

While the 2022 roster has some better positional groups than the 2017 team, particularly at wide receiver and cornerback, the 2017 team has a huge advantage at quarterback, but also at safety as well. The 2017 roster is obviously better than this current roster, but it's perhaps it's not so crazy to think it's closer than you might think?