By keeping Watson off the commissioner's exempt list, the league appears to have forced the Texans' hand. 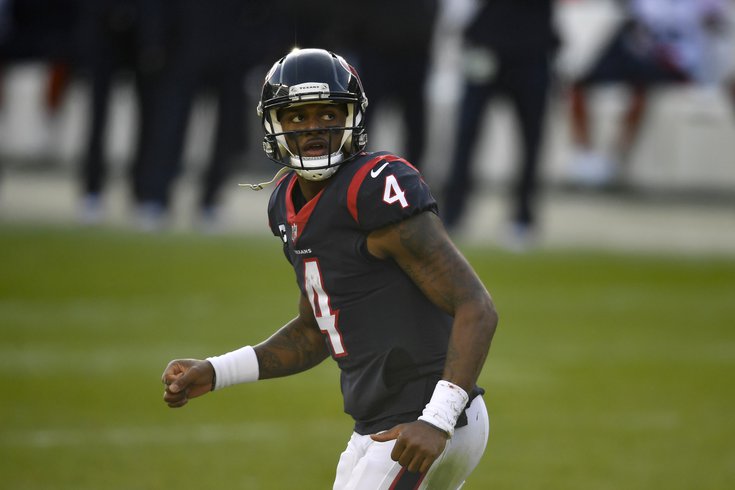 Welcome to the circus.

If you believe it's going to be a little awkward in South Philadelphia when Zach Ertz reports for training camp with the Eagles, try South Texas over the weekend when Deshaun Watson was faced with a decision — show up for the Texans or face up to $50,000 in fines for every day missed.

Those fines are the curveball and the unintended consequences of the new CBA. Under the old system, financial penalties were in place for players under contract and holding out but, more often than not, they were a punishment without teeth and of the wink-wink variety because when there was ultimately a resolution to a particular dispute the fines were simply waived.

The new system was designed to limit holdouts with a more draconian system in which the fines can't be excused by the organization even if it wants to do exactly that. And it's working.

Quarterbacks are reporting today in Houston, and #Texans QB Deshaun Watson is expected to be among them, source said. He’s showing up for testing to begin entry into training camp. However, Watson’s stance about the organization and desire to be traded remains unchanged.

Under the prior CBA, you could almost guarantee Watson wouldn't have shown up for Texans camp, and Ertz, along with his agent Steve Caric, would at least have seriously considered trying to force Howie Roseman's hand by staying away.

Watson doesn't want to play for the Texans and his trade request remains in place. Houston has begrudgingly come to the conclusion that having a 25-year-old franchise quarterback is untenable moving forward, something that wasn't necessarily the case when Watson was simply miffed at Jack Easterby and the organization but quickly escalated when the 22 civil allegations accusing Watson of troubling behavior with masseuses unfurled.

The most-plugged in Houston reporter of all — John McClain — explained the situation to PhillyVoice: "I know this. Watson wants to move on and the Texans want to move on but there are 22 lawsuits and they are disturbing and those are serious accusations."

As camps loomed you got the distinct feeling that the Texans would have liked the chance to breathe and preferred the end game of Watson on the commissioner's exempt list.

Under that scenario, Houston would have pressed pause to let the allegations play out, and then, barring the worst-case of prison time, the attempt to rebuild Watson's trade value for the 2022 offseason would have kicked into high gear. Meanwhile, the player himself would have gotten his money while waiting for a punishment with great variables.

The league — which is doing its always questionable parallel investigation into the Watson charges — evidently came to the decision that putting Watson on the CEL with no criminal charges would set a bad precedent. As NFL Media's Tom Pelissero also pointed out it likely means "the league's ongoing investigation hasn't led Roger Goodell to believe a major violation occurred."

Here's the language in the 2020 personal conduct policy regarding use of the commissioner's exempt list. The NFL hasn't used the designation with Deshaun Watson, indicating the league's ongoing investigation hasn't led Roger Goodell to believe a major violation occurred. pic.twitter.com/bKwiKPS7Ow

If that's the right read, teams considering a future with Watson, a group that includes the Eagles according to multiple NFL sources, might have to speed up their own decision-making processes.

And it now appears the Texans, who had been hesitant to send up the bat signal that they were willing to trade Watson, are open for business. But, as expected, it's going to be costly.

When he reported to camp Sunday, Watson was respectful, but his demeanor reiterated he doesn’t want to be in Houston. The question is, will a team step up with the type of massive offer that would compel the #Texans to move him now? Watson also would have to waive his no-trade.

For Deshaun Watson, the @Texans price has been some combination of 5 high draft picks and starting caliber players, per two league executives.

Already many are speculating on whether David Culley, like Nick Sirianni in Philadelphia, a rookie head coach, will have Watson on the field Wednesday for practice.

That’s where executives in this league tend to get inventive.

Andrew Brandt, who ran the Green Bay Packers for a decade, opened up one possibility with Ertz and the Eagles when talking with PhillyVoice.

MORE: When (not if) Deshaun Watson is traded, there's a '90 percent chance' it's to the Eagles, says Howard Eskin

The overriding point is there are always avenues and when it comes to Ertz locally, assumptions that he will play out the final year of his contract with the Eagles because he's been working out at the facility in advance of training camp fails to understand coaches and executives are not permitted anything more than cursory contact with players using the building for strength and conditioning purposes.

Remember Ertz's presence could also complicate matters with Sirianni, who is planning to move forward with Dallas Goedert as the TE1 and wants to get more speed on the field with 11 personnel (three receivers) as the default setting.

As a coach that has preached competition since the day he arrived, there will be a credibility gap for Sirianni if he attempts to sell to the locker room that Travis Fulgham, Greg Ward, or anyone else vying for the WR3 slot is a better option than an all-time franchise great.

Ertz’s appearance, though, could just as easily be about avoiding the significant fines as Roseman extends the game of chicken into August by signaling to other GMs that he's not just giving the three-time Pro Bowl tight end away.

"It happened to them in the most fortuitous way in the history of the sport in my opinion. Sam Bradford for one. I mean that was one of the great trades in the history of the sport because a team got its starter hurt and they leveraged it and Howie is a great negotiator when he has leverage," Brandt said. "So here, he has no leverage. If they had a good deal for Zach Ertz he would have been gone a long time ago.

"I think what happens is he doesn't ever hit the practice field. Now, what does that mean? He's traded before camp starts? Not necessarily. They may excuse him and until they get the deal he wants, they want, and if it's waiting for an injury that may take a while. If it's just taking whatever you can get, getting training camp two days, and letting teams see what they got. I don't know. I just don't see him taking the field [Week 1] as an Eagle."

This is the circus. Enjoy the show.