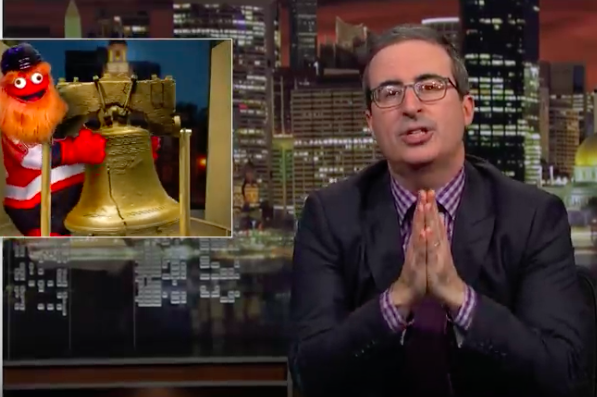 John Oliver thinks Gritty might be making love to the Liberty Bell.

Philadelphia has had a few years to repair its image after the untimely destruction of hitchBOT back in the summer of 2015.

The solar-powered, hitchhiking robot, a social experiment created by Canadian researchers, began his journey in Massachusetts on July 17 of that year. In less than two weeks, he was found smashed to pieces in Old City. Out came the references to Santa snowballs and batteries.

RELATED: You can meet Gritty for free in King of Prussia

We've since managed to show the world that the Eagles' Super Bowl run was as good a time as any to eat horse poop and punch police horses.

During the course of the segment, Oliver brought up hitchBOT's demise in Philly. While the robot's creators tried to downplay the location of his destruction, Oliver made clear that such a thing might happen only in Philadelphia.

HitchBOT never made it to his destination at the Exploratorium in San Francisco. His remains have instead been immortalized at the Canadian Science and Technology Museum.

It's still unknown who's responsible for destroying hitchBOT. Pranksters Jesse Wellens and Ed Bassmaster initially invited credit for the attack, staging fake surveillance video that appeared to show the robot getting stomped at Elfreth's Alley. They later admitted they didn't do it.

If there is any silver lining here, it's that automation may not be as safe a bet in Philadelphia as it will be elsewhere. HitchBOT died for our jobs.