Josh Gordon would make a lot of sense for the Eagles 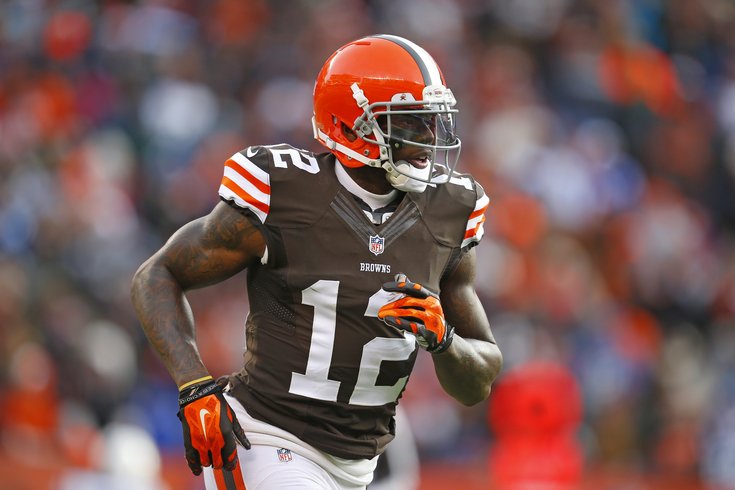 Josh Gordon would instantly become the Eagles' most talented weapon on offense.

On Monday, it was announced that Cleveland Browns wide receiver Josh Gordon was reinstated back into the NFL, although he would still be facing a four game suspension.

Gordon is an extremely talented player and still only 25 years old, but has not been able to keep off-the field issues (weed, mainly) from derailing his career. Gordon's numbers his first three seasons in the NFL:

To note, in 2013, when Gordon racked up 1696 receiving yards on 18.9 yards per catch, he did so with a combination of Brandon Weeden, Jason Campbell and Brian Hoyer as his quarterbacks. A highlight reel from that season:

So, we agree he's good, right? So why might he interest the Eagles specifically?

• Jordan Matthews is a very good player who is likely to make a boatload of catches over a long NFL career. However, his coaches to this point in his career have not shown that they want him playing on the outside. Should his career continue along that path, he can be a premier slot receiver, which of course isn't the worst thing, but may be his ceiling.

• Nelson Agholor's rookie season was a clear disappointment. There were some (self included) last preseason who thought Agholor could contend for Offensive Rookie of the Year honors. Oops. Agholor played in 13 games (starting 12), and produced just 23 catches for 283 yards and 1 TD. On the final day of minicamp, Agholor seemingly proceeded directly from the NovaCare Complex to Cheerleaders Gentlemen's Club, where he was accused of rape. No charges will be filed against Agholor, however, he will certainly face distractions in the aftermath of that incident.

• There was a time that some in the Eagles organization thought that Josh Huff had a higher ceiling than Jordan Matthews. I'm not sure anyone thinks that anymore. Huff, like Agholor, has had moments where he has shown explosiveness, but those moments have been few and far between.

• Rueben Randle has good size at 6'2, 208, and his numbers have generally gotten better as his career has progressed. However, he has also developed a reputation as a poor route runner, and was often blamed for some of Eli Manning's interceptions.

• Chris Givens had a very productive season as a rookie, but his career has been on a downward trajectory since.

Josh Gordon would give the Eagles a bona fide #1 receiver on the outside who would open up the field for the rest of the Eagles' receivers.

The Eagles have taken chances on character risk players this offseason

Gordon is player Chip Kelly likely would not have touched with a 10-foot pole. Under Doug Pederson and Howie Roseman, the Eagles showed this offseason that they were willing to take risks on character issue players, when they drafted Wendell Smallwood, Jalen Mills and Alex McCalister, all of whom had significant red flags.

The Eagles showed interest in deep threats this offseason

Leading up to the 2016 NFL Draft, it became very clear that the Eagles were targeting speed receivers both in free agency, and the types of wide receivers they brought in for their 30 allotted pre-draft visits. As Gordon's numbers above show, he has averaged 17.1 yards per catch over his career.

Gordon costs next to nothing

In 2016, Gordon's salary cap hit is a shade over $817K. In 2017, he'll be a restricted free agent, and will not make much money. The Eagles have more cash spending against their 2017 cap than any team in the NFL, and it's not even close.

Additionally, they will be without their first round pick in 2017 and their second round pick in 2018. They're going to have to find upper-tier talent somewhere, and Gordon could be an extremely low cost player worth the gamble.

So why would the Browns trade him?

All of the above reasons why the Eagles could have interest in Gordon could also be made for the team he's currently on just keeping him. So why might the Browns trade him? Ridding themselves of a long-time headache aside, the Browns drafted five receivers in the 2016 NFL Draft:

*DeValve was listed as a WR at Princeton, but the Browns list him at TE.

At a minimum, the Eagles should be prime candidates to at least kick the tires and find out what it would cost to get a deal done.