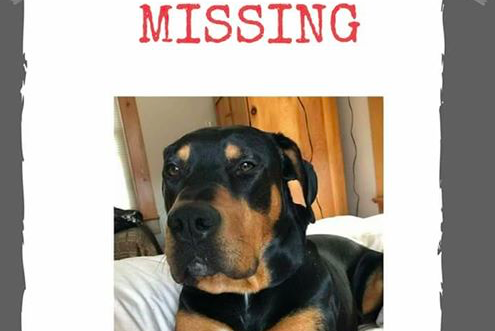 Nash, a 10-month old Rottweiler from Kalamazoo, Michigan, was found by his owner 12 days after they survived a car crash on Interstate 80 in central Pennsylvania.

A determined Michigan family has been reunited with a Rottweiler puppy who was lost in a devastating Pennsylvania car crash the night after Christmas.

Jessica Alvarez and her husband, Gary Vetter, both of Kalamazoo, were returning home from the holidays in New York when their car entered a collision course with a deer in the middle of I-80 in central Pennsylvania.

The vehicle swerved out of the way and rolled over on the side of the road, according to WMMT in western Michigan.

Inside the car with the couple were two dogs — Jordy, a young bulldog, and Nash, the 10-month-old Rottweiler.

The day after the accident, Alvarez scoured the area near Lock Haven for her dogs, who were both ejected from the vehicle.

Jordy turned up a mile away from the crash with a gash that required stitches. Nash was nowhere to be found, so Alvarez shared a "Missing" poster on Facebook.

For 12 days, Alvarez remained in Lock Haven, where she camped out in a neighbor's backyard, cooking food and calling for Nash to lure him to safety. She also placed traps and cameras in the vicinity.

Nash suddenly appeared on the periphery of the woods one night, down ten pounds and frightened out of his wits.

When Nash hesitated to return to her, Alvarez sang him "The Puppy Song" Nash was familiar with from Kalamazoo:

If only I could have a puppy

I'd call myself so very lucky

Just to have some company

Alvarez documented the search on her Facebook page, thanking everyone who helped out along the way, and plans to continue the journey on Instagram and Facebook pages made for Jordy and Nash.

"Our whole family is back together now," Alvarez said. "Thank you guys so much. I love everyone. I love all of you, seriously. Everybody from home, everybody from Michigan, everybody from Loganton, Lock Haven, the whole Sugar Valley area, I just don't even have words ... I don't even know how to thank you all."