Country star Keith Urban is a four-time Grammy award-winning artist with an estimated net worth in the range of $75 million, and a wife named Nicole Kidman.

But damned if Ruth Reed isn't paying for that man's Wawa.

Urban was in Camden on Friday night to perform in front of thousands at the BB&T Pavilion, which he later said he almost called the PB&J Pavilion. The Kiwi sensation recorded a Facebook "Thank You" message for the city on the way to the next stop on his tour.

Apart from concert highlights like "Long Hot Summer," "Stupid Boy," and this cotton candy man dancing to Taylor Swift before the show, the best moment of Urban's visit to South Jersey was a stop at a Wawa in Burlington County. That's where he met Ruth Reed. 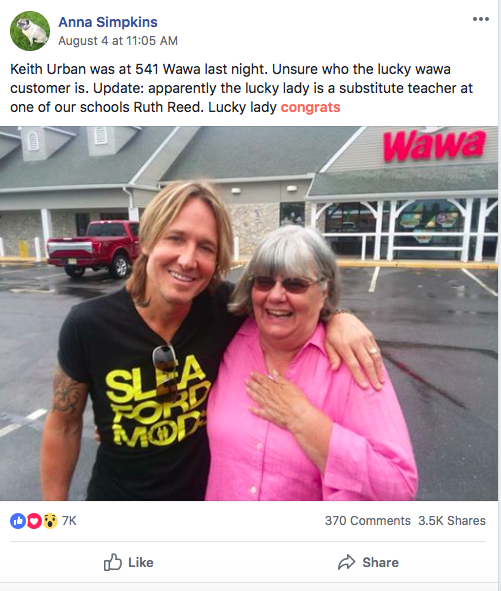 What seemed to be a sweet picture with an artist who appreciates his fans turned into a more hilarious tale. Reed took her story to Instagram, and the post was later shared by a former Medford student of hers.

My favorite story of the day is how my 3rd grade teacher thought @KeithUrban was down on his luck and couldn’t pay for his wawa snacks so she bought them for him. What an angel. pic.twitter.com/mJccVOQWtp

Ruth saw the resemblance but apparently did not believe that Urban was actually Urban. She even asked him to produce Kidman as proof of his identity.

"He finally said that I could ask his bodyguard," Reed wrote. "It was then that I realized what an idiot I was. He graciously allowed me to get my picture taken with him. Another Ruth Reed moment!"

Why is Keith Urban short on pocket change? We don't know what he bought at Wawa, but it's safe to say the world needs more Ruth Reed moments.