Welcome to the 'mushroom capital of the world' 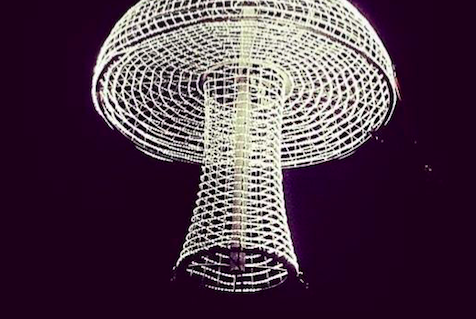 Courtesy of 'Midnight in the Square'/Kennett Square

Kennett Square, the "mushroom capital of the world," does New Year's Eve a little different than New York City.

For the fourth year, Kennett Square will host its version of a New Year's Eve ball drop. As the "mushroom capital of the world," this suburban town raises and drops an 8-foot-tall, 500-pound stainless steel mushroom. To attend, just bring a non-perishable food item to support Kennett Area Community Service.

Between 7 and 8 p.m., the mushroom will be lit and raised to be dropped at midnight. Before the one-of-a-kind show, though, there's plenty of entertainment.

Dancers from Longwood Performing Arts will put on a show, and there will be a laser show every hour beginning at 6 p.m. Restaurants and street vendors will also be open in Kennett Square to feed the crowd.

At 9 p.m., the Garage Community and Youth Center at 115 S. Union St. will open its doors for a holiday party. There's a $10 admission fee to warm up in the venue with food, wine and beer. New Year's Eve hats and noisemakers will be provided to all attendees.

The Funsters, a rock and soul band, will be on stage outside the community center until after the midnight mushroom drop.