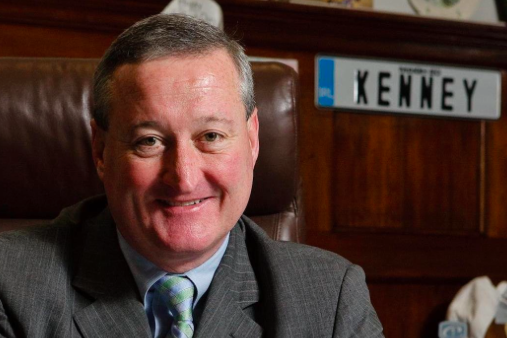 Councilman Jim Kenney walked into his City Hall office, where a throng of reporters had assembled this afternoon.

"You waiting for me?" Kenney asked.

The remark was quite an understatement. Speculation about a Kenney mayoral campaign has sizzled since Council President Darrell Clarke announced he would not run and former city solicitor Ken Trujillo dropped out of the race last week.

Kenney announced that he is resigning from his post effective Thursday, a critical step in his bid for mayor. But he did not announce his mayoral candidacy because the city charter requires that he first resign his elected post.

"I'm not going to be able to tell anybody what I'm going to do until after Thursday because I would then run afoul of our city charter," Kenney said. "But clearly, resigning is a huge step. It shows that I have intention to move forward with what people have been speculating about."

The longtime councilman then spent more than 30 minutes discussing a hypothetical candidacy with reporters.

"I think I will be able to work with every neighborhood in this city," Kenney said. "I think folks understand how my heart feels and what motivates me to take the positions I have taken."

Former state Sen. Milton Street and former Nutter press secretary Doug Oliver also have stated their intent to run, but have not officially announced their campaigns.

Kenney said he has mulled a mayoral candidacy during the last several campaigns, but that the right opportunity arose within the last several weeks. He noted that Trujillo's decision to drop out was an important factor.

Kenney said if the city charter did not require him to resign, he may have entered the mayoral fray earlier. His council posts pays him a six-figure salary and he also does work for Vitetta, an architectural firm. He said he could get by without a full-time job at least through the primary.

Kenney said his campaign finance committee has generated about $70,000, but that he will need as much as $1.5 million to win.

Kenney also offered his views on myriad issues, saying he would go "hat-in-hand" to Harrisburg to gain additional funding for the School District of Philadelphia, that he opposes stop-and-frisk policing and that the city needs to better embrace immigration.

A successful mayor knows how to navigate council so that the agendas of both council members and the mayor move forward, Kenney said.

"I think a successful mayor is a good point guard," Kenney said. "He can run the offense and assist other players in looking good and then the team wins. I think that's how I'd like to approach this. No one can do this by themselves."

Earlier Tuesday, Kenney released a statement saying he will resign his current office on Thursday.

“After twenty-three years of service to the people of Philadelphia, Councilman Jim Kenney will attend his final session of City Council on Thursday and formally submit his resignation,” said a press release from his office.

He touted his accomplishments for LGBT rights, immigration and protecting bargaining rights in the release.

Kenney has reportedly been referring media calls to a former campaign spokesman for Ken Trujillo, leading to speculation that he will inherit Trujillo's campaign machinery. According to Philadelphia magazine, that seems unlikely.