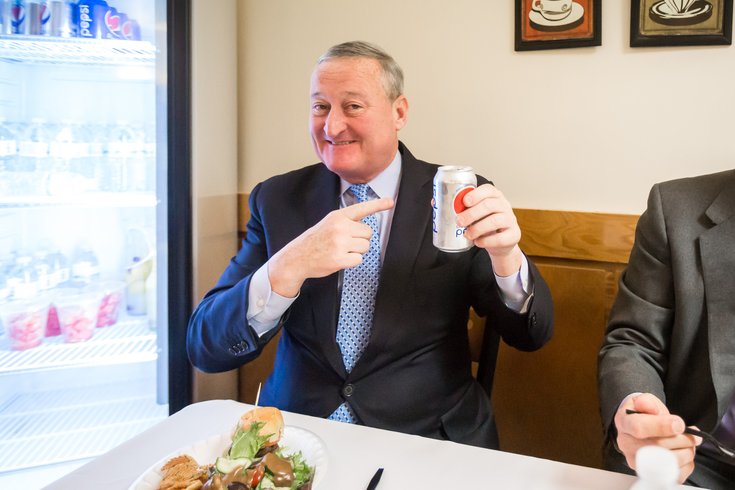 Mayor Jim Kenney smiles with a can of soda during a tour of South Philadelphia High School. When asked about the pose, he responded, 'I want you to buy soda.'

Could Mayor Jim Kenney be looking at life as a professional actor after finishing his time as a public official?

A few recently released trailers for ABC's new comedy series "The Mayor" show its main character turning to real-life mayors across the country – Philadelphia's own included – for advice on the ins and outs of politics. Kind of.

The show, which is set to premiere next week on the network, stars Brandon Micheal Hall as Courtney Rose, a hip-hop artist looking to kick-start his career by running for office in Fort Grey, California – and, in a surprising turn of events, he wins.

What do you do when you need advice on being #TheMayor? Set up a hotline, of course! #TheMayor premieres Tuesday at 9:30|8:30c on ABC! pic.twitter.com/jE0sQ18dYH

Another has Kenney opening up on musical suggestions.

"I have my staff play 'Eye of the Tiger' every time I enter the room," Kenney says.

There's another promo that seeks Kenney's advice on "eating on the job."

"Absolutely not," Kenney says while chowing down on a hoagie.

Lauren Hitt, Kenney's spokesperson, didn't comment on Kenney's opinion on the big role but did share that ABC reached out back in August and filmed in his City Hall office for about 30-45 minutes.

It's not clear if Kenney will make an appearance on the show itself. ABC did not return an immediate request for comment.