Kensington is worst nightmare for family of runaway daughter

'I will never be the same after what I saw down there,' says father of teen addict he rescued off the street 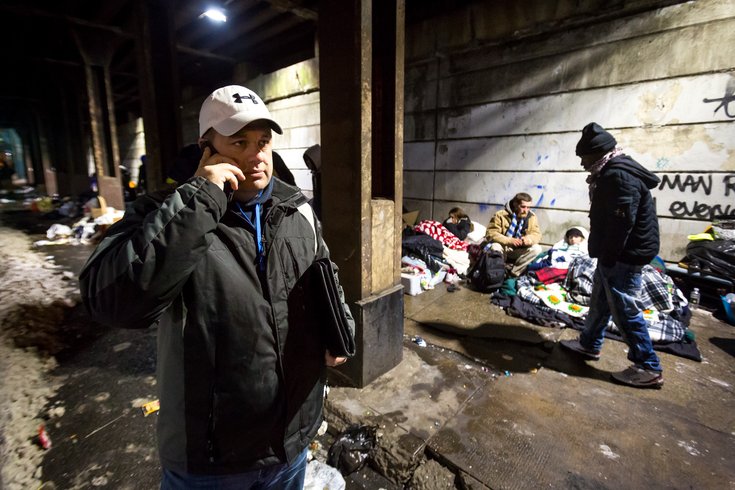 Private investigator Kevin Ryan takes a phone call from the mother of the missing teen he was searching for under a bridge in Philadelphia's Kensington neighborhood last Thursday night. "It's tough when you're dealing with people in this area because you never know who's telling the truth," he says.

Days before the start of the New Year, the 16-year-old girl from the Philadelphia suburbs disappears for the third time in four months as she battles a heroin addiction that twice took her to the streets of Kensington, one of Philadelphia's most troubled neighborhoods for drug abuse.

On a frigid night after a snowstorm late last week, a private investigator from Montgomery County stops his car a block away from an encampment in the neighborhood. The teen's mother has asked him to find her.

READ PART ONE: Inside a private eye's search for a teen addict in Kensington

Here on Kensington Avenue, near Lehigh Avenue, Kevin Ryan clips a Glock 23 to his waist and pulls out his folio with the "missing" photo of Jackie. He goes over the rules and realities of the place: always show respect and don't engage with unhinged people, unless you must.

"It's tough when you're dealing with people in this area because you never know who's telling the truth," says Ryan, who takes on cases like this pro bono. 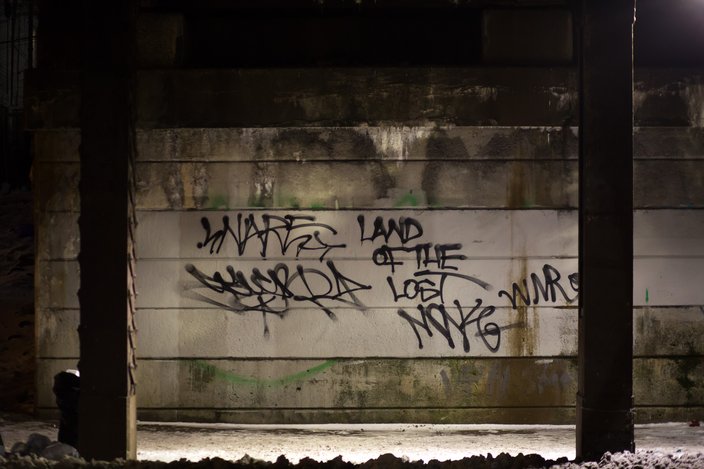 Graffiti marks the walls along Kensington Avenue near a homeless camp under the Conrail tracks.

The temperature is barely 10 degrees and winds swirl under the bridge. Tents and makeshift dwellings line the wall. Traffic roars above. Ryan approaches a group of about 15 men and women, asking if they've seen Jackie, an addicted teen from the Pennsylvania suburbs who has run away again. (PhillyVoice is not using Jackie's real name due to her age and the nature of her ordeal. Her parents agreed to talk about their experiences under that condition.)

The people under the overpass greet him with kindness, even interest.

Within minutes, it's clear that no one recognizes the girl. There is only shock and dismay that another 16-year-old kid from the suburbs would be mixed up in this life.

A 30-year-old woman begins to tell Ryan her story when he asks what brought her here. She has two young children who she hasn't seen in a few years. She lives in Frankford with her mother, who is addicted to crack, and comes to Kensington to shoot up every day, sometimes more than once. Just the day before, she was arrested here for possession. She saw a judge, paid a fine and here she was again in the freezing cold.

"Not really," she says. "I don't even get high anymore. It just keeps me well."

A police car pulls up under the bridge and Ryan checks in with the two officers inside. He shows them the flyer with Jackie's face on it. In the middle of their conversation, he receives a phone call which he steps away to answer. His eyes light up.

'I WILL NEVER BE THE SAME'

When Jackie went missing for the second time, in early October after escaping with another girl from an addiction treatment center in the Philadelphia area, her father took the matter into his own hands.

He drove into the heart of Kensington to see for himself where his daughter had been running to get high.

"Most of the time, parents don't come here looking for a kid. They come here to claim them." – Philadelphia police officer, on Kensington

"I will never be the same after what I saw down there," said Jackie's father.

By pure chance, he and his son spotted two girls getting into a car with a pair of men. One of the girls was Jackie.

The father sprinted to the car, crossing traffic on the way, and jumped on top of the vehicle. The two men in the car were stunned. In the chaos and confusion that ensued, Jackie's father explained that one of the girls was his daughter.

People from around the block streamed out to see what was happening.

"Everyone was going ballistic," said Jackie's father. "The street was filled with 25 or 30 people. Some of them thought I was trying to abduct my own daughter. One had a baseball bat."

"I did what a dad's supposed to do," Jackie's father said. "You're just trying to find out the little glimmer of what to look for next. I don't care how I find her or what she's doing at that point. I just want to know that she's alive. It's not over until it's over. The only thing stronger than fear is hope, and I got lucky. A lot of people don't get that lucky."

One officer said he couldn't believe that Jackie's dad had come to Kensington to find her.

"Most of the time, parents don't come here looking for a kid. They come here to claim them."

Philadelphia has recently taken more aggressive action to break the cycle in Kensington, accepting the new reality of America's opioid epidemic as a public health crisis.

In 2016, the city spent tens of millions of dollars there to clean up lots, seal vacant properties and install new LED street lights.

"If I run again, I'm going to overdose because I love heroin that much." – Jackie's confession to her mother, before she disappeared on Dec. 28

El Campamiento, Kensington's most infamous heroin camp, was cleared last fall after the city reached a deal with Conrail to clean up a mile-and-a-half stretch of its abandoned tracks along Gurney Street. The company has pledged to maintain the grounds — and possibly construct a greenway — as the city ramps up its police presence and looks for ways to improve residential accommodations.

A full-time social services hub created by the city attempts to engage and help people, instead of just pushing them elsewhere. Outreach teams have offered direct services, including housing and drug treatment, to more than 3,000 people since that cleanup began.

Still, addicts new and old have dispersed to crowd in at other locations in the area. They find shelter in abandoned properties and pitch tents at overpass encampments, notably beneath the Emerald Street Bridge, along Weymouth Street, and near where I-95 meets East Allegheny Avenue, among other hubs of illegal activity. 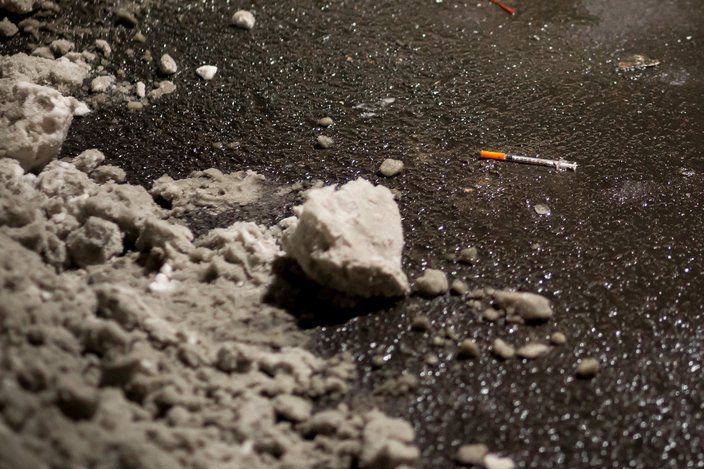 Syringes, empty prescription containers, cigarette butts and garbage mix with slush from a winter storm near a camp on Kensington Avenue.

In the months to come, Philadelphia will launch a mobile EMS unit to visit these Kensington encampments, responding to overdoses and urging the people there to enter treatment programs. The community groups who hand out sandwiches do their part, for now, to convince the homeless that there's a better way to end their suffering than to die by heroin or fentanyl.

But Ryan was confident that Jackie, who had been sober for 72 days before her latest disappearance, would end up back in Kensington.

Between hospital stays and rehab centers, her parents had spent tens of thousands of dollars in an attempt to get her clean. She was doing well, but in the weeks leading up to her latest disappearance, the teen made a confession to her mother.

"If I run again, I'm going to overdose because I love heroin that much," Jackie told her.

'IT'S ALWAYS A COLLABORATIVE EFFORT'

In the darkness under the bridge last Thursday night, Jackie's mother is on the other end of Kevin Ryan's cellphone.

Her daughter has been found, she tells him.

Jackie was in the suburbs, standing next to one of her own "missing" posters, when a local police officer happened to make the connection. She was waiting on a bus to take her to the train station, and from there possibly to Kensington.

Ryan celebrates the news by telling the people under the bridge that Jackie is safe. Everyone is relieved, most of all the young mother from Frankford.

Hoping he can help her out, Ryan gives the woman his card and tells her to call him the next day about getting treatment. She claims she will do so and decides to leave the encampment. She looks anything but well as she trudges off through dirty slush and spent syringes. 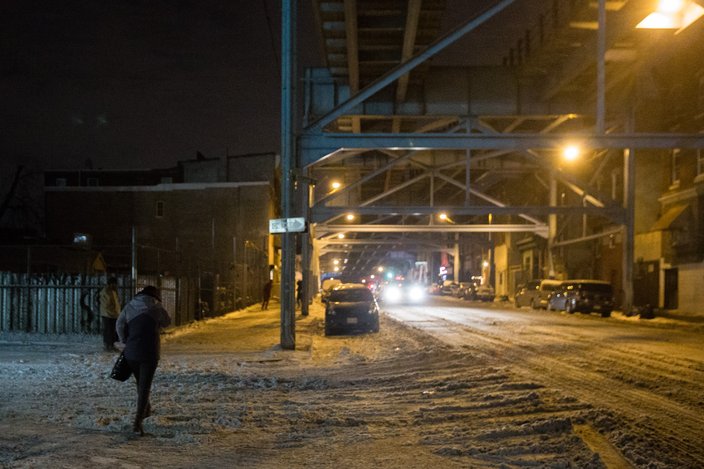 A woman walks through the snow after leaving a camp along Kensington Avenue late at night on Thursday, Jan. 4, 2018.

What will come of Jackie is impossible to know at this point in time. Her father, who has taken a passionate interest in reforming addiction rehab, knows the beast that often goes hand in hand with the treatment of underlying mental health conditions. Recovery, he knows, is much more fragile than beating the initial withdrawal after a 30-day program.

"These kids are going to facilities with an addict identity," Jackie's father said. "When they come out, they have no idea what to do."

For Ryan, Jackie's safe return is a victory — for the moment. He can rest easier and be grateful that society's conscience hasn't quit on kids like her.

"The one thing I can say about her is she's a very strong individual, very strong-willed," Ryan said. "Everybody's different. We all have trigger mechanisms. One of the things that you always want to do is be one step ahead."

He'll take pride in his participation, but he knows he's never in it alone.

"It's always a collaborative effort. We found her. It's always we," Ryan said. "It's law enforcement. It's SEPTA. It's the family. It's us. You can never be the number-one hero in this. I'm one of the fortunate ones, so giving back is easy for me.

"It's not something I think about. I just do it."