Kentucky transplant misses Wawa, so they send her free coffee 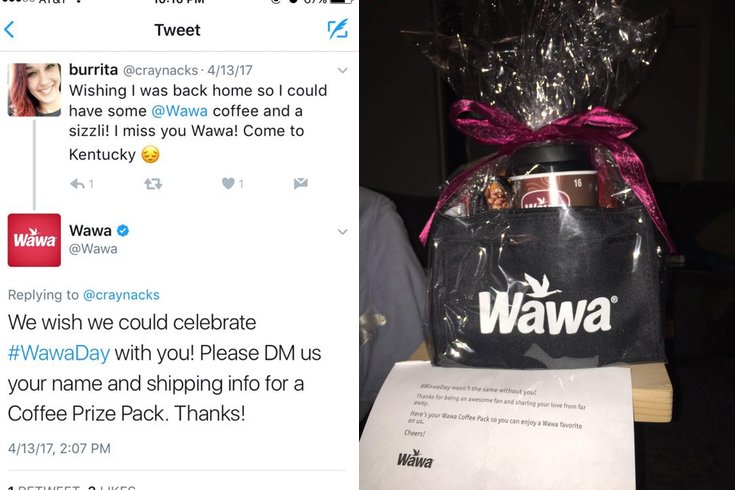 Want to know why people in the Delaware Valley love Wawa so much? Here's a case study.

Rita Kraynak, 25, grew up in Lansdale and lived in Philly for seven years, earning a degree at Temple before moving to Kentucky in May 2016 to take a job as a producer with Kentucky Educational Television.

RELATED: Here's where two new Wawa locations will be opening in Philly

That meant no more Wawa; the closest location would be in Virginia, which would be an eight-hour drive at best.

So when Wawa Day rolled around on April 13, and everyone back home was treated to free coffee, Kraynak missed out.

She tweeted her disappointment, but Wawa responded with a surprise.

@craynacks We wish we could celebrate #WawaDay with you! Please DM us your name and shipping info for a Coffee Prize Pack. Thanks!

Sure enough, on Tuesday, Kraynak came home to a free bag of Wawa coffee, a mug and lunchbox, all courtesy of the convenience store chain.

For someone who used to visit Wawa five times a day in high school for her morning joe, the gesture was appreciated.

"...it's just that iconic reminder of Philly, so when I'm homesick it's nice, to be honest," Kraynak said in a Facebook message.

It appears Kraynak wasn't the only out-of-towner to receive a reminder of home. Wawa tweeted at several users who lamented not being near one of their locations on free coffee day, offering the prize pack.

Company spokesperson Lori Bruce said the promotion is done periodically for occasions like Wawa day, as well as for U.S. Military members stationed oversees who write in to say they're missing Wawa.

Bruce said the company was  "grateful to have such wonderful customers and fans."