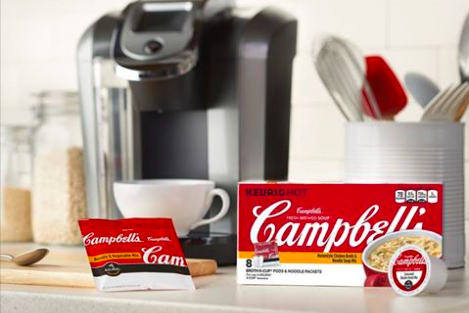 Keurig Green Mountain and Campbell's team up to create K-Cup pods and soup packets for easy use in a Keurig machine.

Cold weather will be here before we all know it and there are few better ways to keep warm than to eat soup in quantities that make us sweat.

According to USA Today, the two companies announced the partnership back in 2013 and have been working together closely over the past two years to ensure that they released the best product.

The Campbell's Fresh Brewed Soup kits come with a packet of noodles and a broth-flavored K-Cup pod that can be placed into the Keurig machine. While some worried that their soup would taste like coffee, or vice versa, Campell's Soup marketing director of innovation Michael Goodman said that consumers can simply run a brew cycle after making soup to avoid any issues.

He added that Campbell's is striving to give its customers maximum convenience. The 70 calorie packets offer a quick, savory snack now available in Homestyle Chicken and Southwest Style flavors.

The move comes as both Keurig and Campbell's have dealt with dips in sales and earnings. Keurig plans to cut its workforce by 5 percent after a third-quarter slump, while Campbell's announced that revenue fell 8.6 percent to $1.69 billion in the latest quarter, the Wall Street Journal recently reported.

It's tough to say whether this will catch on, but as demonstrated in the video below, it definitely brings simplicity if you already own a Keurig machine.