Kevin Cooney: After another failed season, the Phillies remain in baseball purgatory 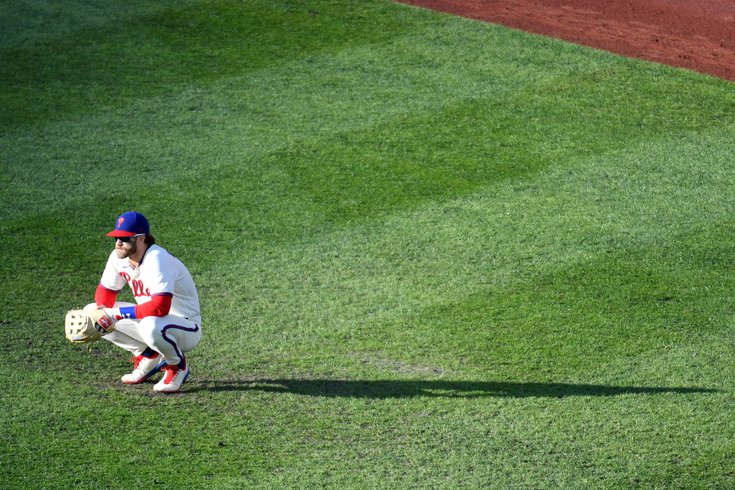 There they are, stuck between heaven and hell.

Last Friday night, the Phillies were in position to get a half-game back of the Braves with just over a week to go in the season, depending on Max Fried’s start in the second game in San Diego.

On Thursday morning, they are dead – light years behind Atlanta, stuck in baseball purgatory with a bloated payroll, depleted farm system and a Groundhog Day feel of another September collapse.

The toughest job in the Philadelphia sports industry this morning doesn’t belong to Nick Sirianni or Daryl Morey. The guy with the biggest challenge is the one who must come up with the marketing plan for 2022 Phillies season tickets. Yes, you have Bryce Harper and Zack Wheeler. But the baggage of missing the playoffs for a decade, a team that became more unlikable as the season went along due to different events (reinstating Odubel Herrera to the roster and the COVID-19 vaccine hesitancy in the clubhouse) and the realization that this drought could easily last another five years because of the minor leagues debacle makes this franchise a tough sell.

What should be more alarming is the fact that this week didn’t exactly break people’s hearts. Maybe it was the series losses to the Diamondbacks and Rockies that did it. But people mentally checked out on this team a long time ago – even when the standings kept saying they shouldn’t.

That excited pulse that people felt back in 2006 — the last year they missed before five straight division titles — when it was Jimmy Rollins, Ryan Howard and Chase Utley didn’t exist this year. The last seven home games of that 2006 season each drew more than 31,000 fans. There was not a crowd in September 2021 that broke 30,000. Yes, Citizens Bank Park was new and exciting at that point. There was no pandemic. But walking around the streets in the past few weeks, did anybody really sense that the town was gripped by the “race”? People were amazed by Harper’s season, who like Howard in that year was on his way to an MVP. But the rest of the bunch? Not so much.

But the one thing that 2006 had was the feeling of a beginning. They had come close in 2005, dispatched Bobby Abreu to the Yankees and turned the keys of the car over to the core group that ended up rewriting history. If anything, 2021 feels more like a giant no man’s land — stuck between good enough to care and bad enough to honestly rebuild.

For example, could Dave Dombrowski really tear this down to the foundation right now if he really wanted to go full-fledged rebuild? The answer is probably not, and for a few reasons.

First, who exactly do the Phillies have that could get big pieces back? Harper and Wheeler would be the main parts and in a perfect baseball economic environment, a ton of people would step up and pay a high price tag. But their contracts limit the field of suitors and there’s contract clauses that could kick in. J.T. Realmuto’s contract and the potential decline with age at the catcher spot makes him off-limits to many teams. Maybe Rhys Hoskins, but he’s also viewed as a DH-only candidate. Jean Segura may get a look or two, but the problem there is teams have noticed he moves around a ton and no team he’s ever been on has played a meaningful October baseball game. Aaron Nola is viewed in a much less favorable light this off-season than he would have been last year. The rest of the roster is what one scout called “pocket lint”— it’s there, but you can’t do much with it.

Even if Dombrowski wanted to push the button — and it certainly isn’t in his makeup — the fallout would likely envelop the organization’s two most important figures in John Middleton and Harper.

Middleton pushed the envelope two years ago because he was tired of losing. Harper came here because he had a belief that the Phillies were on the cusp of winning. Three years into it, nothing's really changed in the overall landscape.

The thing is – the Braves were able to be gotten this year. When Ronald Acuna Jr. went out at midseason, this should have been Philadelphia’s moment with the chaos going on in New York with the Mets.

In this offseason, Atlanta will have to re-sign Freddie Freeman. But with Acuna back, the revenue from their new ballpark rolling in and a farm system that is far better tooled to face the challenges moving ahead, what makes anybody around here think that this opportunity will ever come again? Even if it does, does anyone have confidence that the Phillies — and not the Mets or Nationals — would be the one who could grab that chance and do something with it?

Rightly or not, this franchise now carries heavy baggage with it. They are viewed as carrying the “loser gene” — one that will only find a way to break your heart, have the anvil fall on their heads and blunder their way out of greatness. The only way to change that is to break the cycle. But that’s tough to do when you are stuck in baseball purgatory, which is its own form of hell.

And at this rate, it could be a place the Phillies are going to be stuck in for quite a while.