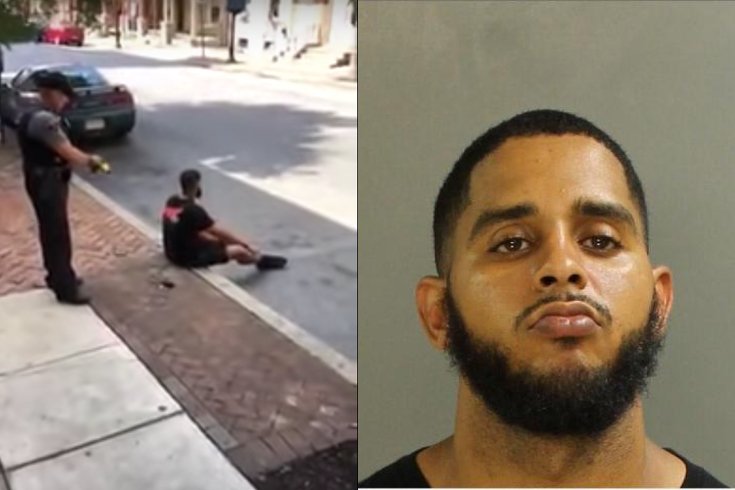 A viral video (pictured left) shows Lancaster police using a taser on Sean Williams (pictured right) while he sat on the curb. Police said he refused to comply with instructions and was causing a disturbance, but Lancaster Mayor Danene Sorace said she was 'upset' by the video, echoing a message from many on social media. The incident is under investigation.

The 27-year-old man who was Tasered by a Lancaster police officer, footage of which was captured in a widely shared video, has filing a civil rights lawsuit against the Lancaster Police Department.

The lawsuit – filed in federal court in Philadelphia by the attorneys for Sean Williams – lists the city of Lancaster, Lancaster police and Officer Philip Bernot as defendants.

Footage of the incident was posted to Facebook on June 29 and shows Williams sitting on a curb as Bernot tells him to put his legs straight out "or you're getting Tased." Then there is a second officer repeating the warning and heard saying, "Put your legs out and cross them now."

In the video, Williams, who was unarmed, puts his legs out and then appears draw them in to cross them. That's when Bernot fired the Taser, causing Williams to collapse. Williams is then instructed to lay on the sidewalk, stomach down and arms out "like an airplane." Williams was placed in handcuffs while on his stomach.

After the video surfaced, Lancaster Mayor Danene Sorace said an investigation was underway over the use of force in the incident.

Williams' lawsuit claims racial profiling was a factor in Bernot's actions and states that African-Americans are arrested more than four times the rate of white youth in Lancaster County.

Williams spoke to "Good Morning America" and said he felt the issue was a reflection of the police officers' incompetence.

"Nobody should be Tased in the back in a situation where they're not doing anything wrong," Williams said.

"If they're following every directive that's being given to them, there's no reason that somebody should get stunned in the back to the point where they could be traumatized for the rest of their life."

Williams said he still feels pain in his head, back, shoulders, and neck from being shocked by the stun gun, and the lawsuit describes "crippling anxiety" he's experienced since the interaction.

Williams' attorney Brian Mildenberg told ABC that the first goal of the lawsuit is to remedy "the pain he suffered and continues to suffer, for being traumatized, for being subjected to excessive force."

The second objective of the lawsuit, Mildenberg said, is to make sure a similar incident doesn't happen again in Lancaster.

Read the entire complaint – filed in U.S. District Court for the Eastern District of Pennsylvania – below: