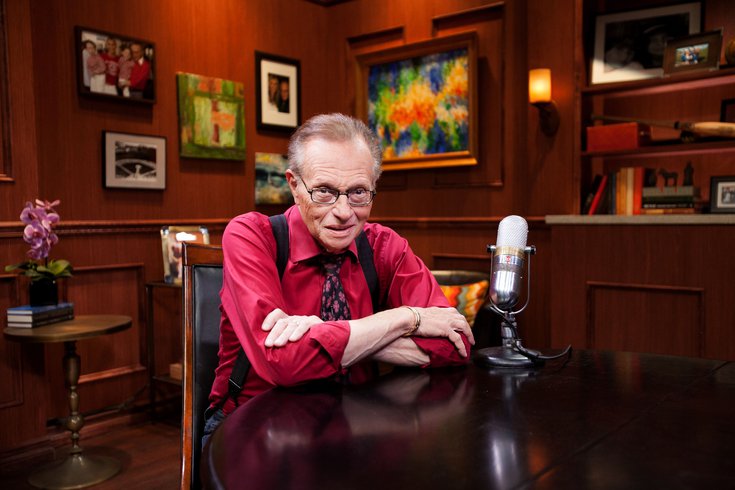 Larry King , a legendary talk show host known for his thoughtful interview style and iconic suspenders and glasses, has died at 87.

A statement posted to his verified Facebook account announced his death on Saturday morning, and his son, Chance, confirmed the news, CNN reported.

The cause of his death was not included in the statement, though CNN reported that King was hospitalized in late December for COVID-19

"With profound sadness, Ora Media announces the death of our co-founder, host and friend Larry King, who passed away this morning at age 87 at Cedars-Sinai Medical Center in Los Angeles," the statement said. "For 63 years and across the platforms of radio, television and digital media, Larry's many thousands of interviews, awards, and global acclaim stand as a testament to his unique and lasting talent as a broadcaster."

King was a longtime CNN host on "Larry King Live'' for more than 25 years, where he interviewed everyone from politicians and celebrities to everyday people. He led Q&A's with every president from Gerald Ford to Barack Obama.

"We mourn the passing of our colleague Larry King," CNN President Jeff Zucker said in a statement. "The scrappy young man from Brooklyn had a history-making career spanning radio and television. His curiosity about the world propelled his award-winning career in broadcasting, but it was his generosity of spirit that drew the world to him."

He was known for his easy going, friendly energy and casual approach to interviewing — never interrupting his interviewees.

King wrote a column for USA Today for two decades, which was known for being full of on-off, seemingly random thoughts, the Associated Press reported. It became so infamous that Norm Macdonald created a parody of King for "Saturday Night Live," poking fun at King's prose with lines like "the more I think about it, the more I appreciate the equator."

After the announcement of King's death, celebrities and politicians responded to the news.

R.i.P To the legend Larry King God bless him. 🙏🏿🕊 pic.twitter.com/2BwiN5O2rb

Rest in peace to a broadcasting legend. ❤️ #LarryKing https://t.co/TDBhORq4MX

The Los Angeles Dodgers are saddened by the passing of Larry King and offer their deepest condolences to his family and friends. pic.twitter.com/Di0aw7LZ5R

RIP Larry King, a giant and a gentleman.

So sad to hear about the passing of my friend, my mentor and my bonus grandfather. There’s only one true King of interviewing and it was Larry King.

“What does it all mean? The answer is I don’t know.” pic.twitter.com/6Y8RkhOnet

After taping more than 6,000 episodes, King left CNN — a move that he said he expected would be his retirement. But instead, he kept working until his death. He worked on "Larry King Now" which aired on Ora TV, Hulu and RT America.

"I just love what I do," King said, "I love asking questions, I love doing the interviews."