Levine will become the first openly transgender federal official if confirmed by the U.S. Senate 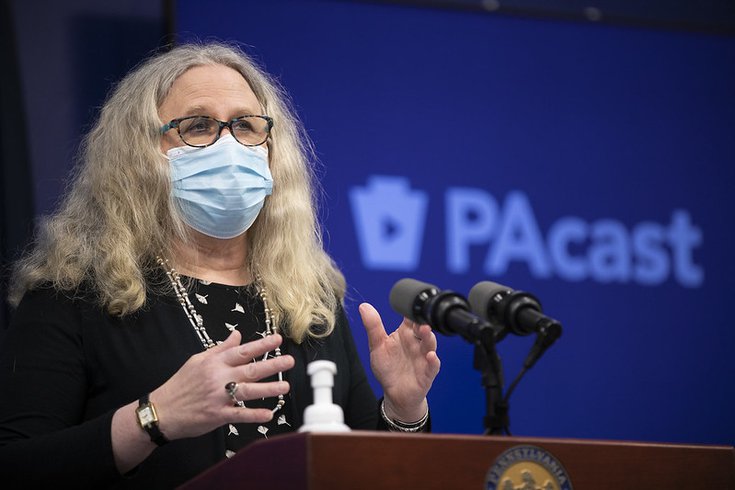 Dr. Rachel Levine has served as Pennsylvania's top health official since 2017, when she was appointed by Gov. Tom Wolf. Now, she's headed to serve in the Biden administration.

A familiar face from Pennsylvania's response to the COVID-19 pandemic will be heading to Washington, D.C. to join the incoming Biden administration.

Health Secretary Dr. Rachel Levine has been tapped by President-elect Joe Biden to serve as the assistant secretary for health in the Department of Health and Human Services, the presidential transition team announced Tuesday.

If confirmed by the U.S. Senate, Levine will become the first openly transgender federal official.

"Dr. Rachel Levine will bring the steady leadership and essential expertise we need to get people through this pandemic — no matter their zip code, race, religion, sexual orientation, gender identity or disability — and meet the public health needs of our country in this critical moment and beyond," Biden said. "She is a historic and deeply qualified choice to help lead our administration’s health efforts."

Levine has been at the forefront of Pennsylvania's efforts to combat the  COVID-19 pandemic since the public health crisis began last March.

Levine has served as Pennsylvania's top health official since 2017, when she was appointed by Gov. Tom Wolf. She previously served as the state's physician general from 2015 to 2017.

Levine released a statement Tuesday afternoon highlighting her work for the Wolf administration:

Since I began state service in 2015, I have been laser focused on building a healthy Pennsylvania for all and I am proud of the work we have done at the Department of Health during my tenure.

Our work on addressing the opioid epidemic has saved lives and developed innovative models to get people into treatment and into recovery.

I am proud of the work we have done to fight diseases such as HIV and Hep C, as well as preventing diseases through our childhood immunization programs.

I am proud of the work we have done as an administration to address health equity, and the work I have done personally to raise awareness about LGBTQ equity issues.

And I am extremely proud of the work we have done during the last year to save lives in the face of the COVID-19 global pandemic.

I look forward to the opportunity to continue to serve Pennsylvanians, and all Americans, as part of the Biden Administration if I am fortunate enough to be confirmed to this position.”

A pediatrician by trade, Levine is a fellow of the American Academy of Pediatrics, the Society for Adolescent Health and Medicine and the Academy for Eating Disorders. She is also the president of the Association of State and Territorial Health Officials.

"Dr. Rachel Levine is a remarkable public servant with the knowledge and experience to help us contain this pandemic, and protect and improve the health and well-being of the American people," Vice President-elect Kamala Harris said. "President-elect Biden and I look forward to working with her to meet the unprecedented challenges facing Americans and rebuild our country in a way that lifts everyone up."

Levine drew criticism for removing her 95-year-old mother from a personal care home during a surge of COVID-19 cases in long-term care facilities. Levine said her mother requested the move and she and her sister complied.

She also was criticized for state guidance that instructed long-term care facilities to readmit residents who had been hospitalized with COVID-19.

Before coming to Pennsylvania, Levine worked at Mount Sinai Hospital in New York City, where she was trained in pediatrics and adolescent medicine.

Levine also has worked at Penn State Hershey Medical Center, where she served as the vice-chair for clinical affairs for the Department of Pediatrics and chief of the Division of Adolescent Medicine and Eating Disorders. Levine has served as a professor of pediatrics and psychiatry at Penn State's medical school.

"Dr. Levine is a highly skilled and valued member of my administration and she will be greatly missed," Gov. Wolf said. "She has been a wise and dedicated partner during this pandemic and throughout her career with the commonwealth. I couldn’t be prouder of the tireless work she’s done to serve Pennsylvanians and protect the public health."

Levine's replacement as Pennsylvania's top health official is expected to be announced later this week.

If confirmed, Levine will join at least seven other nominees and appointees who will make up Biden's incoming health team.

Biden and Harris will be sworn into office Wednesday.