The Biden family volunteers with Philabundance on MLK Day 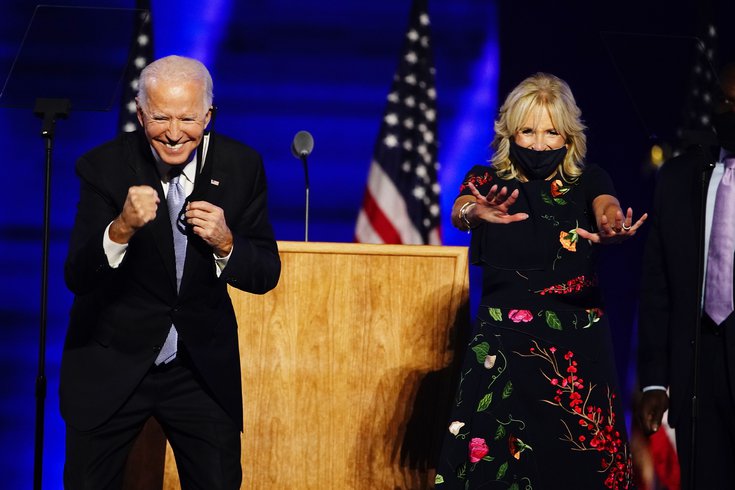 President-elect Joe Biden and his wife, Jill, helped package food at Philabundance on Martin Luther King Jr. Day. They're pictured above at a prior event.

Biden and his wife, Jill, lent a hand to Philabundance by helping pack food boxes that will be distributed to people in need in Philly and Delaware County, according to Feeding Pennsylvania. Their daughter Ashley and granddaughter Finnegan also came out to the nonprofit's South Philly headquarters.

Biden could be seen standing along an assembly line of volunteers, wearing a green Philabundance hat and his iconic Aviator sunglasses as he placed cans of food into boxes.


.@JoeBiden, @DrBiden and family are packing food boxes at Philabundance in Philadelphia as part of the national day of service pic.twitter.com/zSmuT2kn5d

Before leaving town, Joe and Jill Biden left messages on a chalkboard thanking those at Philabundance for their volunteer efforts.

The Bidens left chalk messages after volunteering at Philly's @Philabundance

"Philly Strong! Thank you for all you do—Love, Jill Biden"

"Thank you for giving people in need the most valuable thing that can be given. HOPE" - Joe Biden pic.twitter.com/QynpVyyCBx

There’s no more fitting way to honor the legacy of Dr. Martin Luther King, Jr. than service. Thank you to @Philabundance for letting us stop by and for the work you do every day to end hunger. pic.twitter.com/dy78IQ0vgf

The president-elect @joebiden volunteered at our hunger relief center in South Philadelphia today, in honor of #mlkdayofservice. #HungerHero pic.twitter.com/gALQy60JSw

Today, President-elect @JoeBiden and @DrBiden volunteered at local hunger relief organization @Philabundance to participate in National #DayofService. Thank you to everyone who joined us in serving their communities today! pic.twitter.com/0Zw372r1Gy

In a video message posted to Twitter on Sunday, Biden encouraged Americans to participate in the Martin Luther King Jr. Day of Service and serve others in the spirit of the late civil rights leader.

"From sewing masks to dropping off groceries to their elderly neighbors, Americans across the country know that service, looking out for one another, is part of who we are as a nation," Biden said.

Service is a fitting way to start to heal, unite, and rebuild this country we love.

I hope you’ll join us in honoring the legacy of Dr. Martin Luther King, Jr. by participating in the National Day of Service: https://t.co/H4pDdtXc3V pic.twitter.com/ecHlPK7PAO

Biden will be sworn into office as the 46th president Wednesday in Washington, D.C.

During the 2020 presidential election, Biden frequently traveled to campaign in the Philadelphia region. He held his first campaign rally in Philly in May 2019 and set up his official election headquarters in the city as well.

Biden captured Pennsylvania's 20 electoral votes over President Donald Trump on his way to winning the White House in November.

Biden was born in Scranton before moving to Delaware. The future first lady was raised in Willow Grove, Montgomery County. A self-described “good Philly girl,” Jill Biden received her masters degree in education from West Chester University and her masters in arts from Villanova University.

Here are some more scenes from the Bidens' latest appearance in Philly:

The President-elect and his family volunteering at a hunger relief organization in Philly for the MLK Day of Service ⁦@JoeBiden⁩ pic.twitter.com/l0Gdt3H9EX

Biden - the one in the hat, shades, and aviators! - is loading cans of black beans into boxes at a Philadelphia food bank. pic.twitter.com/dOFgenB76o

.@JoeBiden with his granddaughter Finnegan Biden & his daughter Ashley Biden, take part in a National Day of Service volunteering at Philabundance in Philadelphia, loading canned goods in boxes with other volunteers. The food bank provids food to thousands of people each week. pic.twitter.com/7jCcTU85qF

We are proud to observe the National MLK #DayOfService and encourage all #Pennsylvanians to begin this year with a commitment to #fighthunger ! A big thank you to President-elect @JoeBiden and Dr. Biden for volunteering today! @Philabundance @hunger @FeedingAmerica @jclemsmith pic.twitter.com/zAEsXMMSJ9

Joe, Jill, Ashley and Finnegan Biden, plus Naomi Biden’s boyfriend Peter Neal, are helping fill food boxes at @Philabundance in Philadelphia. The president-elect is wearing a Philabundance cap as he puts cans of black beans into the boxes. pic.twitter.com/90ghhZeatk

President-elect Joe Biden packed boxes with canned goods on Monday (1/18), while volunteering for Philabundance, a hunger relief organization in Philadelphia, PA. Mr. Biden pitched in as part of a Day of Service project for Martin Luther King Jr Day. pic.twitter.com/sPE7q034mu