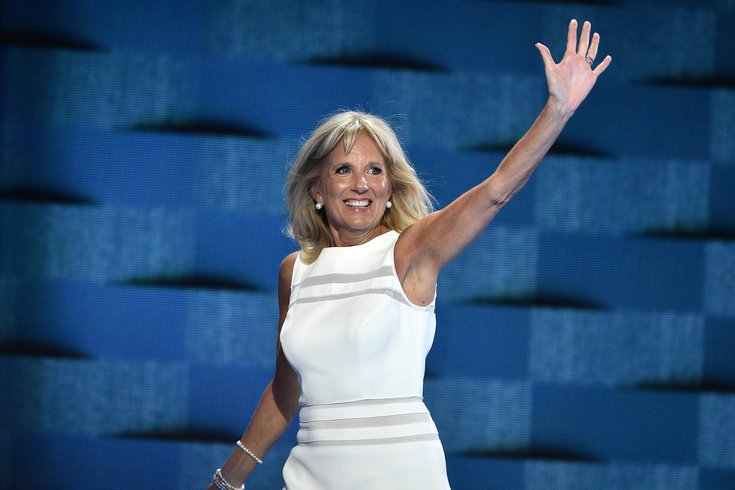 Dr. Jill Biden helped usher out a heckler who tried to interrupt Joe Biden, during a speech before Tuesday's New Hampshire primary election. Jill Biden later said 'I'm a good Philly girl.' In the photo above was taken during the 2016 National Democratic Convention at the Wells Fargo Center in Philadelphia.

Dr. Jill Biden said she was embracing her Philly roots when she helped usher out a heckler who had interrupted her husband, Joe Biden, during a speech in New Hampshire on Monday night.

The former vice president was speaking to supporters at a campaign rally the night before the nation's first primary when a man appeared to attempt to walk behind the podium where Joe Biden was standing. The heckler looked to be recording the situation on his phone, and the crowd chanted, "We want Joe," before Jill Biden showed the man the door.

Bo Erikson, CBS reporter covering the Biden and Amy Klobachar campaigns, tweeted that when asked about the incident, Jill Biden, who grew up in Willow Grove, said, "I'm a good Philly girl."

The former second lady also tweeted the video on Monday with the caption, "You can take the girl out of Philly..."

You can take the girl out of Philly... https://t.co/tiAbSEnH14

Sen. Bernie Sanders, who came in second in Iowa, has an eight point lead over Biden with 25% of Democratic support. Biden received 17%. Pete Buttigieg may have won the Iowa caucus with 13 delegates to Sanders' 12 delegates, but he only received 10% of support from Democrats. Former New York City Mayor Michael Bloomberg and Sen. Elizabeth Warren received 15% and 14%, respectively.

In the same poll, when people who identified as likely Democratic voters were asked which candidate would make the best leader, regardless of how they intended to vote in the primary, Biden and Sanders were at the top, each with 22% support.